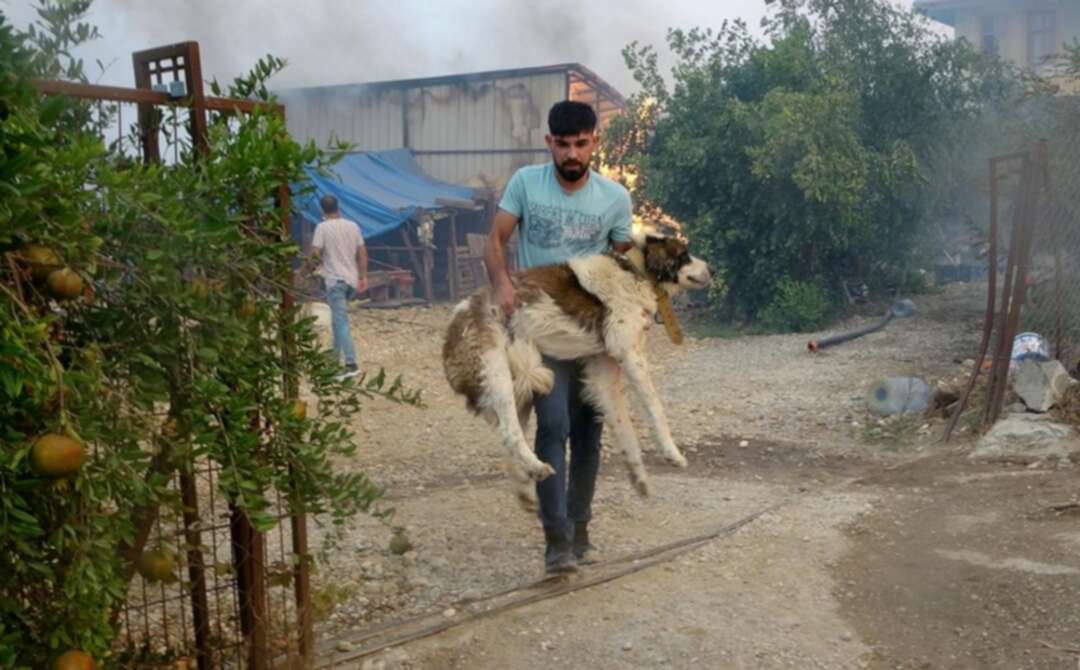 According to the AP, Turkish authorities on Thursday began investigating the cause of a string of forest fires in Turkey’s Mediterranean and southern Aegean regions, including two near the coastal resort town of Manavgat that killed three people and sent over 50 others to the hospital as homes burned down.

A wildfire that broke out Wednesday in Manavgat, in Antalya province, and was fanned by strong winds and scorching temperatures, was largely contained, Agriculture and Forestry Minister Bekir Pakdemirli said. But another fire that started overnight and swept through the district of Akseki, 50 kilometers (30 miles) north, kept firefighters engaged.

Three people were killed in those fires, and authorities evacuated nearly 20 neighborhoods or villages.

The Antalya region is a popular vacation destination for tourists from Russia and other parts of Europe.

Fires also broke out Thursday in 16 other locations, including in the Icmeler region, close to the resort of Marmaris, 320 kilometers (200 miles) west of Antalya, that briefly threatened holiday homes and hotels. A hotel in the Aegean beach resort of Guvercinlik, near the town of Bodrum, was also evacuated, Pakdemirli said. 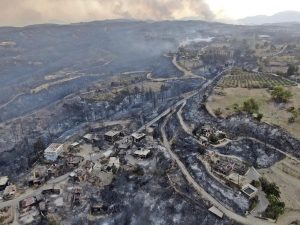 An aerial photo shows destroyed houses in a village as wildfire continue to rage the forests near the Mediterranean coastal town of Manavgat, Antalya, Turkey, Thursday, July 29, 2021. Authorities evacuated homes in southern Turkey as a wildfire fanned by strong winds raged through a forest area near the Mediterranean coastal town of Manavgat. District governor Mustafa Yigit said residents of four neighborhoods were moved out of the fire’s path as firefighters worked to control the blaze that broke out Wednesday. It was not immediately clear what caused the fire but authorities said nearby tourist resorts were not affected. (Suat Metin/IHA via AP)


Mehmet Oktay, the mayor of Marmaris, told NTV television that he could not rule out “sabotage” for the fire there, while Fahrettin Altun, the Turkish presidential communications director, said “comprehensive investigations were ... launched into the cause of the fires.”

Pakdemirli said a total of 53 forest fires were reported in the country on Wednesday and Thursday, but that most of them had been brought under control. Three planes, 38 helicopters and some 4,000 firefighters were deployed to battle the blazes, he said.

Wildfires are common in Turkey’s Mediterranean and Aegean regions during the arid summer months, although some previous forest fires have been blamed on arson or outlawed Kurdish militants.

The dead in the fires in Antalya included a 82-year-old man in Akseki’s Kepezbeleni neighborhood, where 80% of the houses were incinerated, the district’s governor, Volkan Hulur, told Anadolu.

The Turkish government’s Disaster and Emergency Management Presidency, or AFAD, said in addition to the three dead, at least 112 people were affected by the fires, including 58 who were hospitalized, mostly for smoke inhalation.

Authorities also rescued 10 people stranded at a restaurant near Akseki.

Pakdemirli said more than a 1,000 farm animals perished while 1,500 acres of agricultural land and 120 acres agricultural glasshouses were destroyed in Manavgat. He said 10 intubated intensive care patients at Manavgat’s state hospital were transferred to other hospitals as a precaution.

Patrizia Under, who was vacationing in the Icmerler area, said she was bathing in the sea with friends when she noticed a fire blazing on a mountainside behind a residential area that engulfed the air with smoke.

“We got out of the sea and got into our car and left,” she said by telephone, as she waited for authorities to allow people to return to their homes.