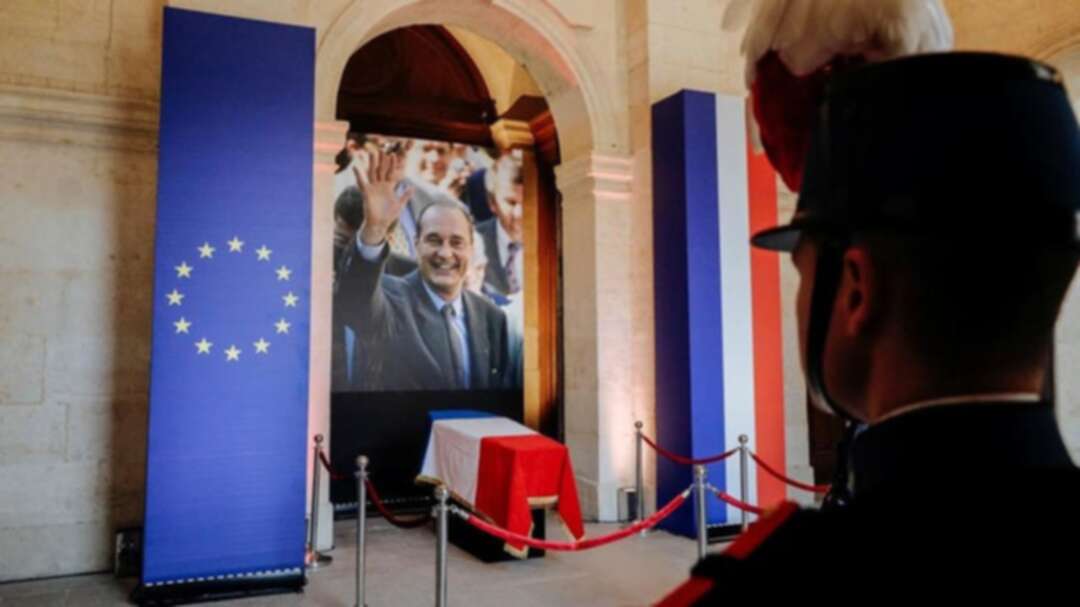 The coffin of late French President Jacques Chirac is seen at the Invalides monument in Paris. (Reuters)

About 30 foreign leaders, including Russian President Vladimir Putin, gathered on Monday in the French capital for the funeral of former president Jacques Chirac, who died last week aged 86.

Chirac was feted by many French people for asserting the country’s role as a global player and for opposing the 2003 invasion of Iraq, while a conviction after he left office for misusing public funds did little to tarnish his image.

Military honors will be paid to Chirac at the Hotel des Invalides in central Paris, where he has been lying in state, before his coffin is taken in a procession to the church of Saint Sulpice.

There, the visiting heads of state and government will join French dignitaries at a funeral ceremony. Later, French President Emmanuel Macron will host the visiting leaders at a lunch at the Elysee Palace.

Chirac is to be buried at the Montparnasse cemetery in Paris, in a plot next to his daughter Laurence, who died in 2016.

Over the weekend, thousands queued outside the Hotel des Invalides to pay tribute to Chirac. His coffin was on display, draped in the French flag and in front of a large photograph of a smiling Chirac.

Chirac was “someone who had a different idea of his role, of France’s role in the international community, who showed it in difficult situations,” said Paris resident Remu Issons, who was among the crowd at the lying-in.

Crowds gathered too at Paris town hall, where Chirac served for 18 years as mayor. “My heart is heavy,” said Anne Firmin, who was looking at a display of photographs of Chirac at the height of his political power. “For me, it’s my whole youth.”