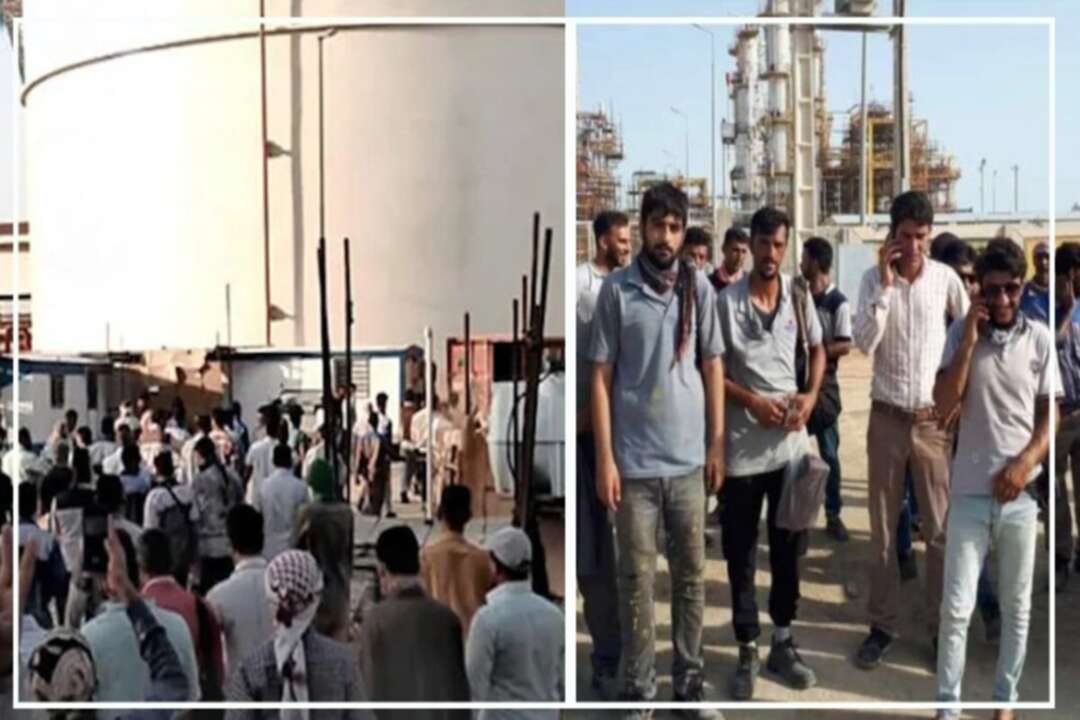 On June 19, the day Khamenei pulled out Raessi as the next president of Iran from ballot box despite the boycott of the election by a majority of the people, the workers of Farab petroleum company based in Beadkhoon in Assaluyeh in reaction to this appointment went on strike.

The strike, of course, happened after several rallies and protests in recent months. The legitimate demands of the workers are to set the minimum wage above the poverty line, better working conditions, payment of wages and benefits without delay, which sometimes paid several months late. When the workers saw that their demands were not being heeded, they did not wait for Ibrahim Raessi to take over the presidency, so that their situation might improve, because they know, there is no difference between him and Hassan Rouhani in addressing the demands of the workers.

Almost all of Iran's workers now live below the poverty line, and their patience with the empty promises of the regime's leaders to improve their situation is running out. With inflation above 50%, their meager wages, which are almost a third of the poverty line limit, leave them with nothing to lose.

Now, after the protests and strikes of truck drivers, teachers, nurses, and retirees, it is the turn of the oil company workers to react to this situation. The strike, however, came after dozens of employees and workers of the Iranian Oil Company in at least five cities and towns in Assaluyeh, Lavan, and Bahregan and an oil rig in the Persian Gulf protested against their working conditions and low income in late May.

Since the oil industry is the most important and influential industry in Iran and any disruption in the production and distribution of petroleum products have crippling effects on all industries and service sectors and society, the strike of oil company workers is totally different from the strike of other guilds. This strike can very well act as a spark in the barrel of gunpowder and make the anger of Iranian society erupt in the current situation and kick start another decisive uprising like the one in November 2019 in a very short time.

Of course, Khamenei and other leaders of the Iranian regime are well aware of this and live in constant fear, but because they cannot resolve any of society’s problems and cannot meet the demands of the workers, they resort to dictatorial methods, which is first they turn to threatening and then arresting and firing the workers. They laid off 700 workers of the Tehran refinery in an act to force other workers to return to work and break their strike.

But despite all the threats by the Iranian regime, the general strike of oil and petrochemical workers have expanded and entered its second week and so far, this strike has affected more than 60 refineries, petrochemical centers, and power plants in Tehran, Arak, Isfahan, Ahvaz, Abadan, Mahshahr, Jask, Assaluyeh, Gachsaran, Damavand, Behbahan, Bushehr., Kangan, Qeshm, Khark, Urmia, Kerman, Bandar Abbas, and Ilam.

Khamenei knows that if he complies with the demands of these workers, he must respond to the demands of other sections of society who want a better living conditions, but because the Iranian regime is drowning in corruption and all its leaders only care for their own interests and their regime’s survival, they have not met people’s legitimate demands. In some cases, in the past, the regime was forced to meet the people’s demand only when they felt the danger of a public uprising.

This time again, the regime was faced with determined workers who have nothing to lose and given that these are the last days of Hassan Rouhani's term, decision-making to resolve these issues have become more difficult.

It is possible that if the regime fails to meet the workers’ demands and these strikes spread further, the whole regime will be in serious danger of collapse and overthrow.