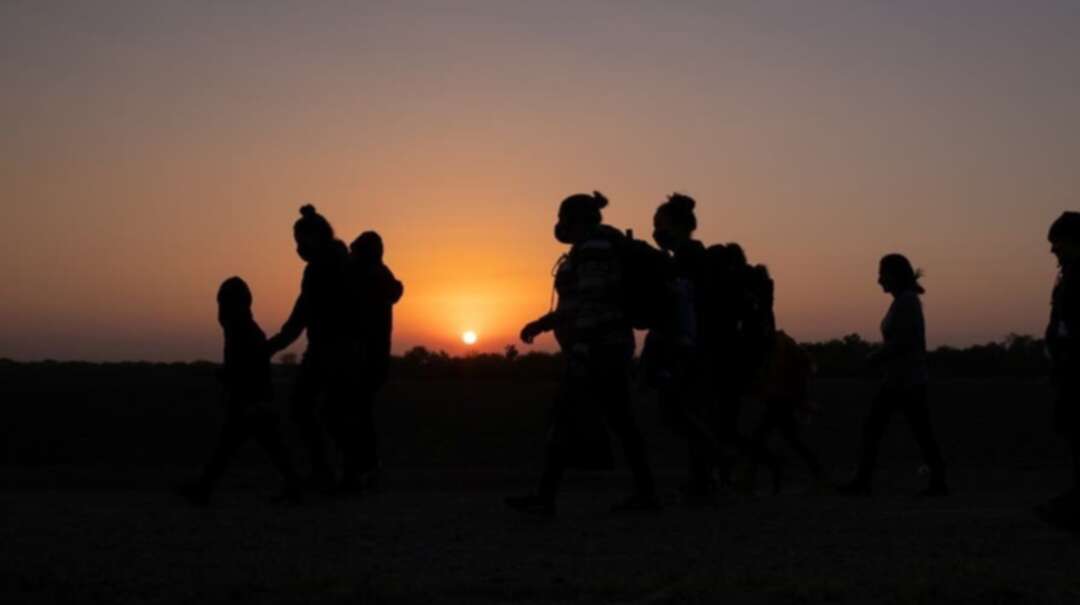 The sun rises as asylum-seeking migrants' families from Honduras and El Salvador walk towards the border wall after crossing the Rio Grande river into the United States from Mexico on a raft, in Penitas, Texas, US, March 26, 2021. (File photo: Reuters)

Migrant families will be held at hotels in the Phoenix area in response to a growing number of people crossing the US-Mexico border, authorities said Friday, another step in the Biden administration’s rush to set up temporary space for them.

US Sen. Kyrsten Sinema was told that US Immigration and Customs Enforcement will occupy “several hotels along the southwest border, including in Chandler and Phoenix,” her office said in a statement. Chandler is a Phoenix suburb that’s more than 150 miles (241 kilometers) north of the border.

ICE declined to identify specific hotels and locations, saying only that its $86.9 million contract announced last month with Endeavors Inc. will provide about 1,200 hotel beds in Texas and Arizona. Migrant families will generally stay less than 72 hours for processing.

The contract says the San Antonio-based provider of veterans care, disaster relief and migrant services already has beds available at hotels in Chandler and the Texas cities of El Paso and Cotulla, southwest of San Antonio. The first families to be housed in hotels under the contract were set to arrive Friday.

Sinema’s office said the Democratic senator spoke with Homeland Security Secretary Alejandro Mayorkas and will hold him “accountable for protecting Arizona communities and ensuring all migrants are treated fairly and humanely.”

The Border Patrol encountered 52,904 families along the Mexican border last month, up from 19,286 in February and 3,455 in March 2020. The Endeavors contract says authorities anticipate the highest number of family arrivals in 20 years during the 12-month period ending Sept. 30.

Only about one in three families encountered last month was quickly expelled from the US under federal pandemic-related powers that deny people a chance to seek asylum. Immigration authorities have been releasing families with children 6 and younger into the country while their cases are decided.

Mexico also has resisted taking back Central American families with young children, especially in Tamaulipas state bordering Texas’ Rio Grande Valley, the busiest corridor for illegal crossings. The US flies some families to other border cities — San Diego and El Paso — to be expelled to Mexico from there.

To save time, the Border Patrol has been releasing migrant families — about 9,600 people as of Tuesday, according to US Rep. Henry Cuellar — without notices to appear in court. Instead, they’re told to report to an ICE office in 60 days.

The contract with Endeavors comes as the administration is scrambling for more space to hold families and unaccompanied children. The Border Patrol picked up nearly 19,000 children traveling alone last month, its highest monthly total on record.

The US Department of Health and Human Services — which places unaccompanied children with “sponsors,” most often parents and close relatives — has found space in convention centers, military bases and other large venues. Los Angeles County officials said Friday that its fairgrounds will be used to temporarily house up to 2,500 unaccompanied children.

Lawyers representing immigrant children in longstanding federal litigation over custody conditions raised concerns on Friday that Health and Human Services isn’t moving quickly enough to release the minors to sponsors. Without doing that, so long as border authorities continue detaining children at this pace, “it is difficult to see how a proliferation of overcrowded, irregular facilities can possibly be avoided,” the attorneys wrote in a court filing.

Government lawyers wrote in court papers that Health and Human Services’ office of refugee resettlement is ramping up efforts at recently-opened sites to quickly reunite these children with their families.

Texas Gov. Greg Abbott, a Republican and frequent Biden critic, asked the administration to close a holding facility for unaccompanied children at the Freeman Coliseum in San Antonio, citing allegations that they aren’t getting enough to eat and boys are unsupervised in showers.

White House press secretary Jen Psaki said Friday that the administration takes the “safety and the well-being of children in our care very seriously” and that authorities would investigate Abbott’s claims, but that, at this point, “we have no basis for his call” to shut down the facility.