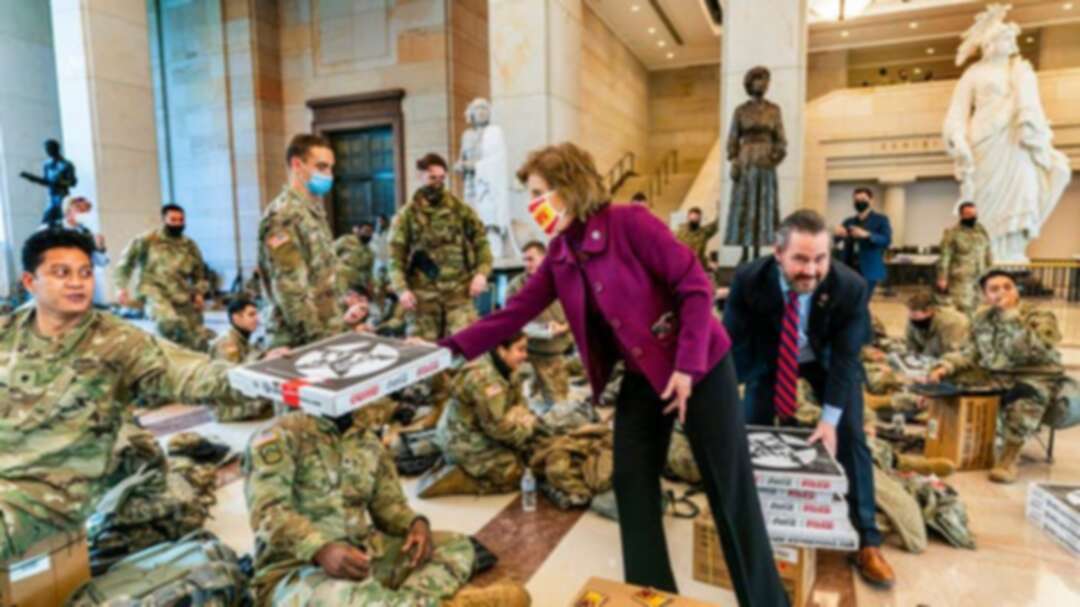 The National Guard were on a 24-hour watch in the US Capitol after last week’s violence, with off-duty members left to catch naps in hallways and below the bust of General George Washington, who led the United States to victory in its battle for independence against Britain more than two centuries ago.

A large presence of guard members dressed in fatigues and carrying rifles guarded the outside of the building on Wednesday, while others lined the corridors of the Capitol. The House of Representatives was meeting to consider impeaching President Donald Trump for his role in the January 6 assault on American democracy, when his supporters stormed the building in a deadly rampage. 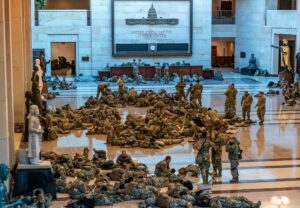 Hundreds of National Guard troops hold inside the Capitol Visitor's Center to reinforce security at the Capitol in Washington, Wednesday, Jan. 13, 2021. The House of Representatives is pursuing an article of impeachment against President Donald Trump. (AP)

National Guard troops have been stationed inside and outside the seat of Congress since at least Friday and the D.C. police have said to expect 20,000 National Guard troops in Washington to secure the city before President-elect Joe Biden’s inauguration on January 20. Riot shields and gas masks are piled in the hallways.

New fencing and other security measures have also gone up around the building that is seen by many as an important global symbol of democracy. A seven-foot (two-meter) high fence has been erected around the Capitol, with metal barriers and National Guard troops protecting the congressional office buildings that surround it.

“The attack on the Capitol was a violent insurrection that resulted in the spilling of American blood,” said US Representative Hakeem Jeffries, a Democrat from New York. “And that’s why extraordinary security measures have been taken.

Federal Aviation Administration chief Steve Dickson on Wednesday signed an order vowing a “zero tolerance approach” to any disruptive air passengers after some Trump supporters disrupted flights after the Capitol violence last week. The order will last through March 30. 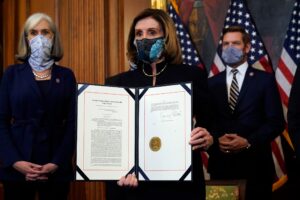 House Speaker Nancy Pelosi of Calif., displays the signed article of impeachment against President Donald Trump in an engrossment ceremony before transmission to the Senate for trial on Capitol Hill, in Washington, Wednesday, Jan. 13, 2021. (AP)

National Guard troops have been frequently used by states in helping law enforcement quell protests over the past year. However, the decision to arm them with guns highlights fears over the threat of further violence in the days leading up to the inauguration.

Officials have said it is important for the troops to be armed for their self defense and that they are still in a support role of law enforcement forces.

“The Capitol has responded in an appropriate way to meet the nature of the severe security threat that is being posed by domestic terrorists and white supremacists,” said Jeffries.

He said the National Guard already had been considered as part of the security bubble for the inauguration but, based on the events of last week, the security had been ratcheted up.

House Democrats and some Republicans approved the impeachment of Trump late Wednesday, formally charging him with inciting an insurrection. Many Republicans questioned whether Congress was moving too fast.

House Minority Leader Kevin McCarthy, the chamber’s top Republican, had opposed impeachment but said: “That doesn’t mean the president is free from fault. The president bears responsibility for Wednesday’s attack on Congress by mob rioters.”