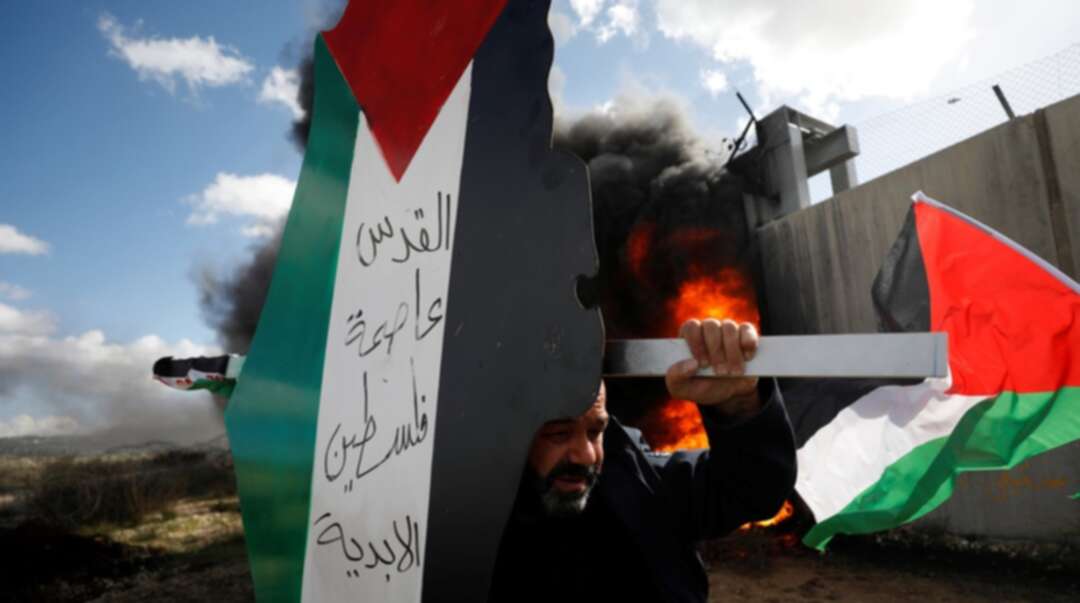 A demonstrator carries a model of a map with the colors of the Palestinian flag reading "Jerusalem is the eternal capital of Palestine" during a protest against the U.S. President Donald Trump's peace plan in the West Bank January 31, 2020.

Earlier this week, as I asked the government an Urgent Question on the violence in Israel and Palestine, I read out the names of some of the children who had died. Four children from the al-Masri family tragically lost their lives, including Yazan. She was just two years old. My mother’s family are from Jerusalem. As I read their names I felt my voice start to break. Just as my heart does for all Palestinians and Israelis caught up in this terror.

Since May 12, the death toll has only risen. At the time of writing, 31 Palestinian children and an Israeli child have tragically been killed. Awful scenes of violence have been shown within Arab-Jewish communities in Israel. And, as the UN Special Envoy Tor Wennesland warned, there is a real danger of the conflict escalating “towards full-scale war”.

First and foremost, there must be de-escalation, now. The international community has an essential role to play in this. Britain has to apply pressure to stop the conflict and the killing of innocent civilians and children – and help facilitate new negotiations. Over a hundred years on from the Balfour Declaration, Britain has to recognise its historic obligation to the people of Palestine and use our influence as a permanent member of the security council to sway the biggest block to a united international front – America. Biden said “diplomacy is back” – well, now he needs to show it.

Important to all this is getting both Hamas and the Israeli government to stand by their commitments under international law. That’s why I was disappointed that after I stood up in parliament, the minister did not take the opportunity to condemn the scale and targeting of the Israeli air strikes – strikes which have killed innocent civilians. Nor did the foreign secretary’s media statement on May 10 night make any acknowledgement of the role of the Israeli government.

Remember it was the evictions in Sheikh Jarrah followed by the gross overaction of the Israeli authorities towards Palestinian protesters and the storming of the al-Aqsa mosque, during the holy month of Ramadan, that have ignited this tinder box. A tinder box that has been years in the making.

The proliferation of evictions, demolition and new settlements in the Occupied Palestinian Territories not only run counter to international humanitarian law, including the Fourth Geneva Convention, but they only serve to make a viable two-state solution ever more distant. If the UK stands on the side of anything, it should be on the side of international law. Therefore, we should welcome, rather than undermine, as Boris Johnson did a few weeks ago, the investigation by the International Criminal Court into possible war crimes committed by the Israeli government.

Equally, the reaction of Hamas must be condemned, and they too has to be held to account. Firing rockets towards innocent Israelis is wrong. Violence only begets violence. Hamas might claim to speak for the Palestinian people, but they do not. They most certainly do not for me. Just as the extremist Israelis who attack Palestinians do not speak for all Israelis. We need to wrestle this tragic situation away from the extremes, who stoke the fire for their own political ends, and back towards hope and peace. After all, without hope, there is no incentive to stop the violence.

As long as the underlying issues are left unaddressed, then the most we can hope for is not peace, but merely a ceasefire, and likely reescalation in a few years time. The difference between today and the last war in 2014 is that there is no longer any negotiating table to go back to. This is why the time is right for Britain to soon play its strongest hand and recognise the state of Palestine. Without Israel and Palestine coming to the table as equal partners, the likelihood of the negotiations failing is almost inevitable.

And finally, above all else hope is what we need now. New hope. I urge all Palestinians, Israelis and anyone who supports peace to not give up. While that two-state solution, promised to families like mine, has never seemed more distant, I choose to believe it is possible in my lifetime. But we must also recognise that to achieve it, we need to fight for it. Not with rockets, but with goodwill, diplomacy and above all, understanding.

Layla Moran is a Liberal Democrat MP and spokesperson for foreign affairs.