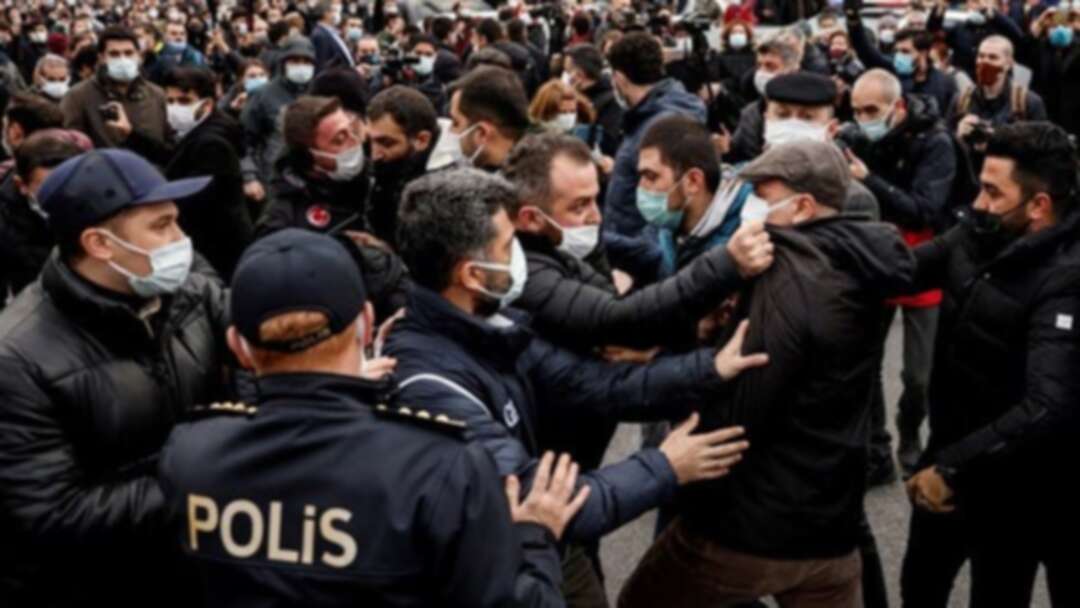 A plainclothes police officer grabs Ahmet Sik, independent member of Turkish Parliament, by the jacket during a gathering in solidarity with Bogazici University students who are protesting against the appointment of Melih Bulu as new rector of the university, in Istanbul, Turkey, on February 2, 2021. (Reuters)

Turkish police detained 65 people late on Thursday over protests which first started last month at a top university, authorities said on Friday, continuing a crackdown on the protesters despite growing international criticism.

Students and teachers at Istanbul’s Bogazici University have protested against President Recap Tayyip Erdogan’s choice of university rector, an appointment they said was undemocratic.

The Istanbul governor’s office said the protesters had violated a ban on public demonstrations, gatherings and marches imposed due to the COVID-19 pandemic. It said that the people detained on Thursday in Istanbul’s Kadikoy district were carrying out illegal acts.

Some 600 people have been detained since January 4 after protests spread in Istanbul and Ankara, authorities have said. Most have been released, despite repeated statements from officials that the protesters are terrorists.

Two people who were detained at an Istanbul protest on Tuesday were arrested overnight, a court spokeswoman said. 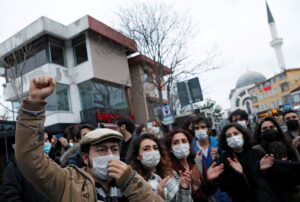 Students shout slogans as they wait in front of the Bogazici University in solidarity with fellow students inside the campus who are protesting against the new rector and the arrest of two students, in Istanbul, Turkey February 1, 2021. (Reuters)

Government response to the protests and condemnation of an art display including a picture blending Islamic and LGBT images has alarmed the US and United Nations, both of which have criticized what they called homophobic rhetoric. Ankara dismissed the criticism as interference in its domestic affairs.

The EU Commission said the detention of students “exercising their legitimate right to freedom of assembly” was deeply worrying, and the COVID pandemic should not be used as a reason to silence critical voices.

“Hate speech displayed by high-level officials against LGBTI students during these events and the closing of a LGBTI association is unacceptable,” the commission said.

Erdogan said on Wednesday his government would not allow the protests to swell into a repeat of widespread demonstrations in 2013, calling protesters terrorists. His interior minister described them as “LGBT deviants.”