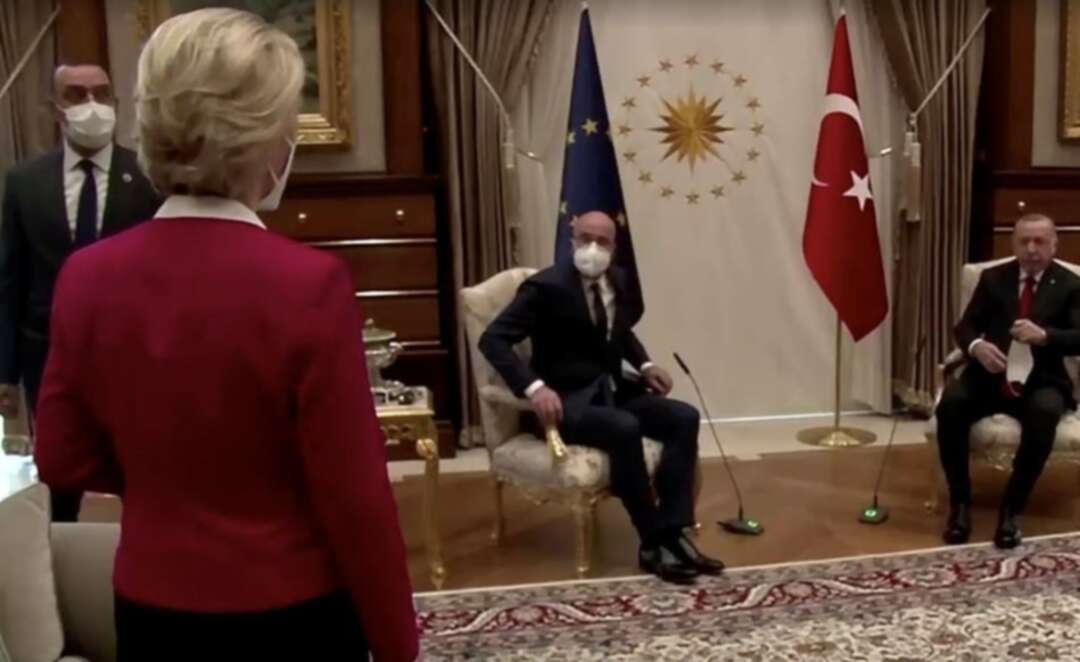 Turkey’s foreign minister responded on Thursday to a diplomatic mishap in which only one of two visiting European Union chiefs were given a chair at a meeting in Ankara, saying the seating was arranged in line with the bloc’s demands.

European Commission President Ursula von der Leyen was taken aback when Charles Michel, head of the European Council, took the only chair available next to President Tayyip Erdogan at his presidential palace on Tuesday.

Video of the incident showed the first female head of the EU executive, and the only woman in the talks, briefly standing and gesturing in surprise at the two men before she sat on a couch adjacent to the main chairs.

It was broadly shared on social media and prompted backlash against Ankara over protocol and against Michel for not defending his fellow EU executive.

Mevlut Cavusoglu, the foreign minister who was seated Tuesday on another couch, said on Thursday the seating arrangement was in line with international protocol and that Turkey was being subject to “unjust accusations”.

“Turkey is a deep-rooted state, it is not the first time it hosts a guest. The protocol followed for meetings in Turkey is within the international protocol framework. The same was done here too,” he told reporters in Ankara.

“The protocol at the presidency met the demands of the EU side. In other words, the seating arrangement was designed to meet their demands and suggestions.”

In the past, three chairs were provided when Erdogan visited Brussels for talks with the heads of the European Commission and the European Council, which collectively represents the EU’s 27 member states.

Ties between Brussels and Ankara have been strained since a failed coup in 2016 prompted a crackdown in Turkey that has led to the arrests of thousands. A maritime row between Turkey and Greece stoked tensions last year and the EU threatened sanctions on Ankara, but they are now testing a cautious rapprochement.

A strategic solution for the Kurdish negotiations which American sponsorship in the eastern north, areas under the control of the Syrian Kurds UNRWA praises new US aid for Palestinians at ‘critical moment’