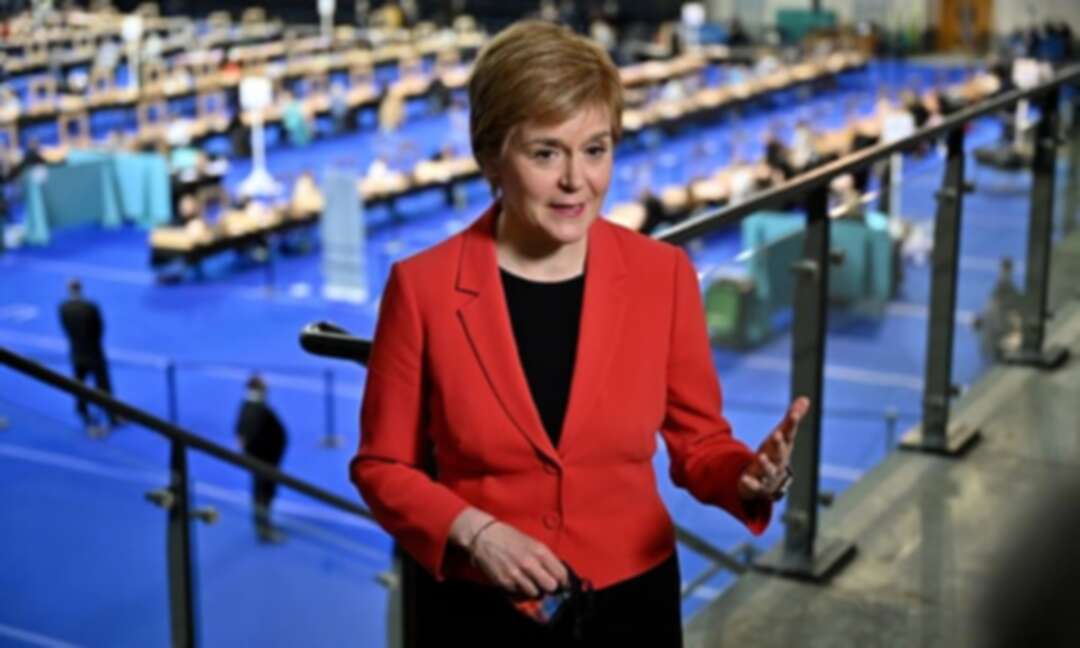 Nicola Sturgeon said the SNP would introduce legislation for a referendum ‘and if Boris Johnson wants to stop that he would have to go to court’.

Boris Johnson has said it would be “irresponsible and reckless” to hold a second independence referendum as the possibility of an outright majority in the Holyrood elections for the Scottish National party remains on a knife-edge on Saturday morning.

With an SNP victory now assured after the first day of counting, the scene is set for a clash with Downing Street as the party’s leader, Nicola Sturgeon, warned Johnson that he would “have to go to court” to stop her new government introducing legislation for another referendum.

But as Sturgeon said she would do so “when the time is right” if a pro-independence majority is achieved once the rest of the results are declared, Johnson told the Daily Telegraph: “I think a referendum in the current context is irresponsible and reckless.”

Referencing the work of the armed services and the furlough scheme, Johnson insisted: “I think there’s been an eloquent testimonial during the pandemic to the power of the union.”

It remains in the balance whether the SNP has secured an outright majority of 65 seats in the Scottish parliament or if there will be a pro-independence majority with Scottish Greens MSPs. After 48 of the 73 constituency results in Scotland were declared on Friday, the SNP had 39 seats, the Liberal Democrats four, the Conservatives three and Labour two.

Speaking on BBC Radio 4’s today programme on Saturday morning, the deputy SNP leader, John Swinney, accepted it would be “very, very challenging” for the party to achieve an outright majority, but rejected the suggestion that only this would serve as sufficient mandate for a referendum.

Swinney said: “I don’t accept that proposition because I think what that question comes down to is what’s the composition of the Scottish parliament, and who tried to get elected to it. And I’m very confident of two things.

“One, that the SNP will be the leading party after the elections. It is very clear that’s going to be the case. And secondly, I’m certain there will be a majority in the Scottish parliament of people who are committed to the holding of an independence referendum on the future of Scotland.”

A final result after Holyrood’s 56 top-up list seats are counted is not expected until late on Saturday. These are expected to show significant gains for the Scottish Greens. But initial results suggested that Alex Salmond’s newly formed Alba party, which was only standing candidates on the list, is unlikely to gain any seats.

On Friday, Sturgeon said: “If it is indeed the outcome of this election I pledge today to get back to work immediately to continue to steer the country through the crisis of Covid and then, when the time is right, to offer this country the choice of a better future.”

Sturgeon also told Channel 4 News that the SNP would introduce the legislation for a referendum “and if Boris Johnson wants to stop that he would have to go to court”.

“If this was in almost any other democracy in the world it would be an absurd discussion,” Sturgeon told Channel 4. “If people in Scotland vote for a pro-independence majority in the Scottish parliament, no politician has got the right to stand in the way of that.”

Late on Friday, the SNP’s hopes of achieving an overall majority were dealt a significant blow after Scottish Labour’s deputy leader, Jackie Baillie, held Dumbarton, a seat which had Scotland’s narrowest majority of 109 votes.

Baillie increased her majority to 1,483 votes, with the help of anti-SNP tactical voting.

Sir John Curtice, the elections expert, said Baillie’s victory made it unlikely Sturgeon would win an overall majority. “Unionist tactical voting seems to have played a key role in denying the SNP their majority in this election,” he told the BBC.