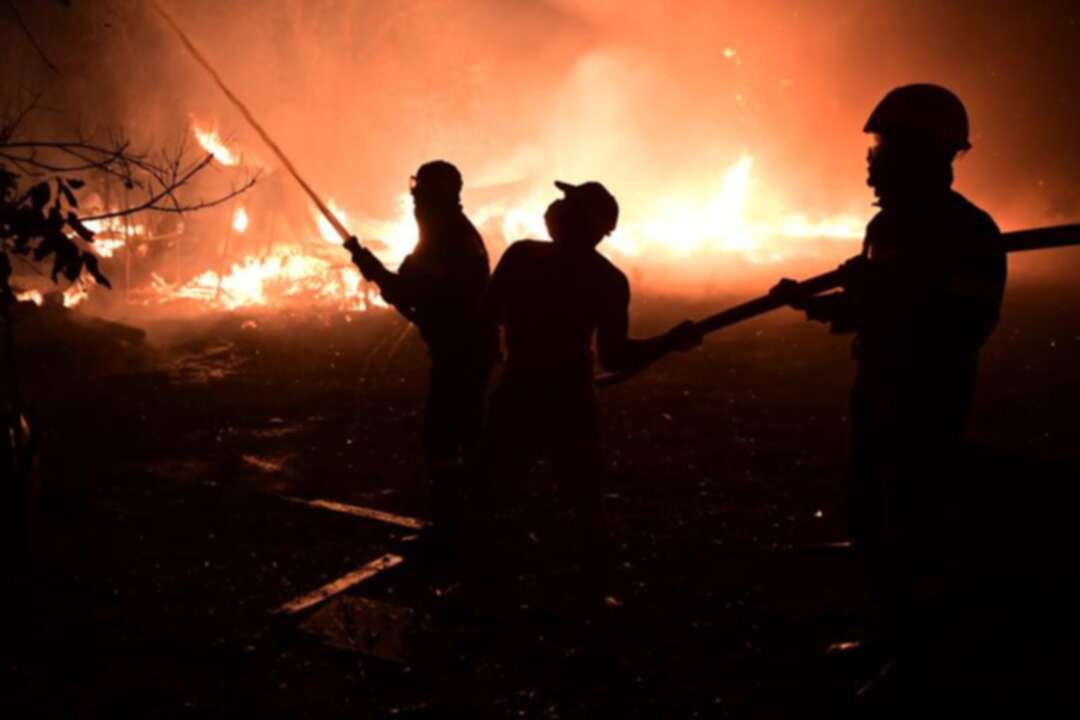 The AP reported that more than 500 firefighters struggled through the night to contain a large forest blaze on the outskirts of Athens, which raced into residential areas Tuesday, forcing thousands to flee. It was the worst of 81 wildfires that broke out in Greece over the past 24 hours, amid one of the country’s most intense heatwaves in decades.

Civil Protection chief Nikos Hardalias said the fire north of Athens was “very dangerous,” and had been exacerbated by strong winds and tinder-dry conditions due to the heat that reached 45 Celsius (113 degrees Fahrenheit) in the area.

No severe injuries were reported, and authorities said several buildings had been damaged but no detailed breakdown was available. The cause of the blaze was unclear.

“We continue to fight hour by hour, with our top priority being to save human lives,” Hardalias said. “We will do so all night.”

“These are crucial hours,” Hardalias said. “Our country is undergoing one of the worst heatwaves of the past 40 years.”

The wind dropped later Tuesday, and the regional governor for greater Athens, Giorgos Patoulis, said this could allow the fire to be tamed after water-dropping aircraft resume operations at first light Wednesday.

“If the winds don’t grow it can be brought under control by the early morning so the planes can provide the final solution,” he told state ERT TV.

The blaze sent a huge cloud of smoke over Athens, prompting multiple evacuations near Tatoi, 20 kilometers (12 1/2 miles) to the north and forcing the partial closure of Greece’s main north-south highway. Residents left their homes in cars and on motorcycles, often clutching pets, heading toward the capital amid a blanket of smoke.

One group stopped to help staff from a riding school push their horses into trucks to escape the flames.

Fire crews went house to house to ensure that evacuation orders were carried out, and 315 people were escorted to safety after calling for help. Authorities said nobody was listed as missing, and Greek media said six people required treatment for light breathing complaints.

As the heat wave scorching the eastern Mediterranean intensified, temperatures reached 42 degrees Celsius (107.6 Fahrenheit) in parts of the Greek capital. The extreme weather has fueled deadly wildfires in Turkey and blazes in Italy, Greece, Albania and across the region.

Wildfires also raged in other parts of Greece, prompting evacuations of villages in Mani and Vassilitsa in the southern Peloponnese region, as well as on the islands of Evia and Kos, authorities said. A total 40 blazes were raging late Tuesday.

The fires prompted Greek basketball star Giannis Antetokounmpo to cancel celebrations planned in Athens for the NBA championship he won recently with the Milwaukee Bucks. 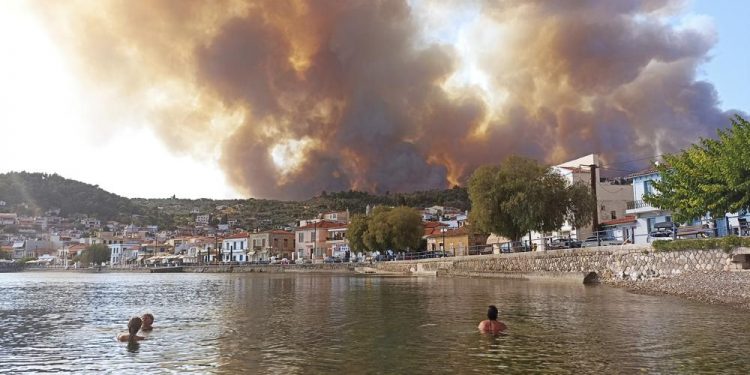 Flames burn on the mountain near Limni village on the island of Evia, about 160 kilometers (100 miles) north of Athens, Greece, Tuesday, Aug. 3, 2021. Greece Tuesday grappled with the worst heatwave in decades that strained the national power supply and fueled wildfires near Athens and elsewhere in southern Greece. As the heat wave scorching the eastern Mediterranean intensified, temperatures reached 42 degrees Celsius (107.6 Fahrenheit) in parts of the Greek capital. (AP Photo/Michael Pappas)


“We hope there are no victims from these fires, and of course we will postpones today’s celebration,” Antetokounmpo wrote in a tweet.

Earlier, authorities closed the Acropolis and other ancient sites during afternoon hours. The site, which is normally open in the summer from 8 a.m. to 8 p.m., will have reduced hours through Friday, closing between midday and 5 p.m.

The extreme heat, described by authorities as the worst in Greece since 1987, has strained the national power supply and fueled the wildfires.

The national grid operator said the power supply to part of the capital was “endangered” after part of the transmission system, damaged and threatened by the fires, was shut down.

Seven water-dropping planes and nine helicopters were involved in the firefighting effort near Athens, including a Beriev Be-200 amphibious aircraft leased from Russia. They ceased operations after dark for safety reasons.

The blaze damaged electricity pylons, adding further strain on the electricity network already under pressure due to the widespread use of air conditioning.

The Greek Fire Service maintained an alert for most of the country for Tuesday and Wednesday, while public and some private services shifted operating hours to allow for afternoon closures.

Hardalias appealed to the public for high vigilance.

“Because the heatwave will continue in coming days, please avoid any activity that could spark a fire,” he said.