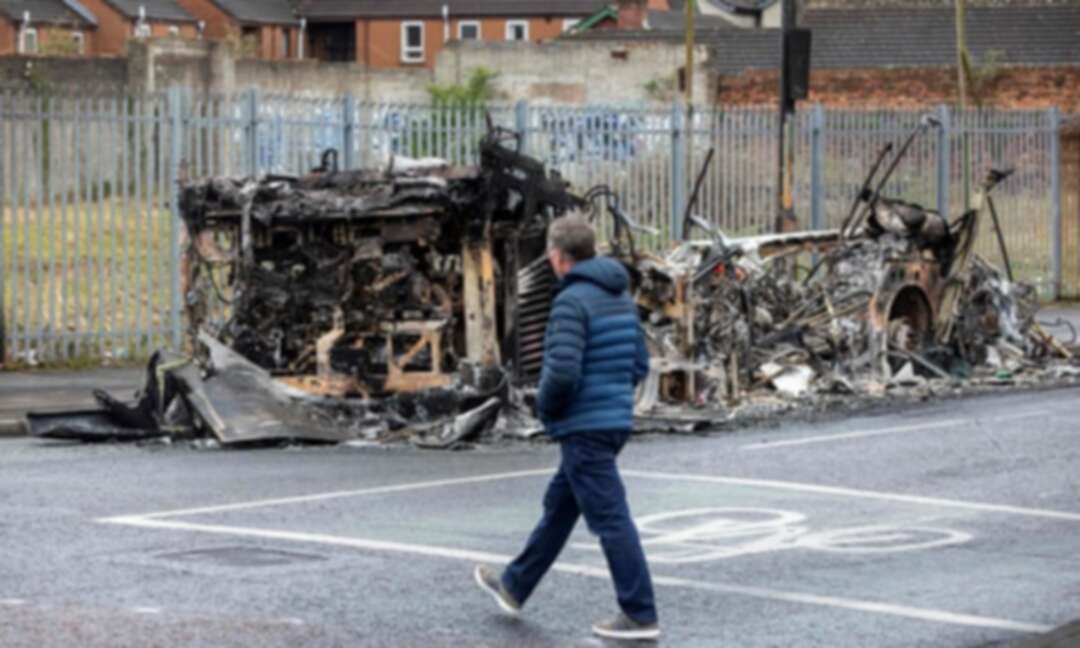 The remains of a burnt-out bus on the loyalist Shankill Road in Belfast on Thursday.

Northern Ireland’s power-sharing executive is holding an emergency meeting in Stormont after another night of riots scarred parts of Belfast and ratcheted up a political crisis.

Simon Byrne, the chief constable of the Police Service of Northern Ireland, briefed party leaders on the security situation on Thursday before a debate at the assembly, which has been recalled from its Easter break.

There were reports that loyalists are planning fresh protests this weekend, a prospect that will alarm the British and Irish governments.

Arlene Foster, the first minister and Democratic Unionist party (DUP) leader, spoke with Byrne, marking a sharp turnaround from her refusal to meet him earlier this week despite escalating violence.

The DUP has demanded the chief constable’s resignation over policing of republican funerals but Foster did not repeat that demand in a tweet after the meeting. She condemned the violence as unjustified and unjustifiable. “Those responsible must be subject to the full rigour of the law,” she said.

Seven officers were injured on Wednesday night when masked youths in the loyalist Shankill Road area hurled petrol bombs and rocks and sent a burning, empty bus careering down the street. Kevin Scott, a Belfast Telegraph photographer, was assaulted and his camera smashed.

Youths on the adjacent nationalist Springfield Road hurled missiles over a “peace wall” on to the loyalist side, triggering a fusillade in response. Mobs skirmished when one of the gates in the wall was prised open and set alight.

“Calm is needed on BOTH sides of the gates before we are looking at a tragedy. These are scenes we hoped had been confined to history,” the Police Federation tweeted.

At least 55 police officers have been wounded during seven consecutive nights of disturbances, with trouble switching between Belfast, Derry, Newtownabbey and Carrickfergus.Loyalist anger at policing, a perception of nationalist ascendance and the consequences of Brexit, along with criminal gang activity, have fuelled the riots. It is among the worst rioting since the 2013 flag protests and comes as Northern Ireland prepares to mark the centenary of its foundation dating from the 1921 partition of Ireland.

Unionist parties have been accused of tacitly encouraging unrest by demanding the resignation of the chief constable over the force’s alleged favouritism to Sinn Féin during the policing of republican funerals, notably that of Bobby Storey, which drew an estimated 2,000 people, including Sinn Féin leaders, last June during lockdown restrictions.

Critics have accused the DUP of stoking the controversy to deflect loyalist anger over the party’s role in the creation of a trade border down the Irish Sea. The justice minister, Naomi Long of the Alliance party, said “dishonesty” over Brexit had fuelled resentment.

Youths interviewed during protests in Newtownabbey and the Shankill Road on Thursday cited the sea border, alleged police bias and a sense that Protestants had become second-class citizens as the reasons they were carrying rocks and bottles. In some cases older men appeared to be directing them but it is unclear if major paramilitary groups were involved.

The Irish and British governments expressed grave concern at the attacks on police, the bus driver and the photographer. “The way to resolve differences is through dialogue, not violence or criminality,” Boris Johnson tweeted.

Some in Westminster urged the prime minister to visit Northern Ireland. Louise Haigh, the shadow Northern Ireland secretary, said Johnson needed to step up to protect a “fragile” peace process.

“This moment demands leadership. The prime minister must convene cross-party talks in Northern Ireland, and engage with the joint custodians to the Belfast/Good Friday agreement, the Irish government to find solutions and address tensions.”

“This needs to stop before somebody is killed or seriously injured,” he told RTE. “These are scenes we haven’t seen in Northern Ireland for a very long time, they are scenes that many people thought were consigned to history and I think there needs to be a collective effort to try to defuse tension.”