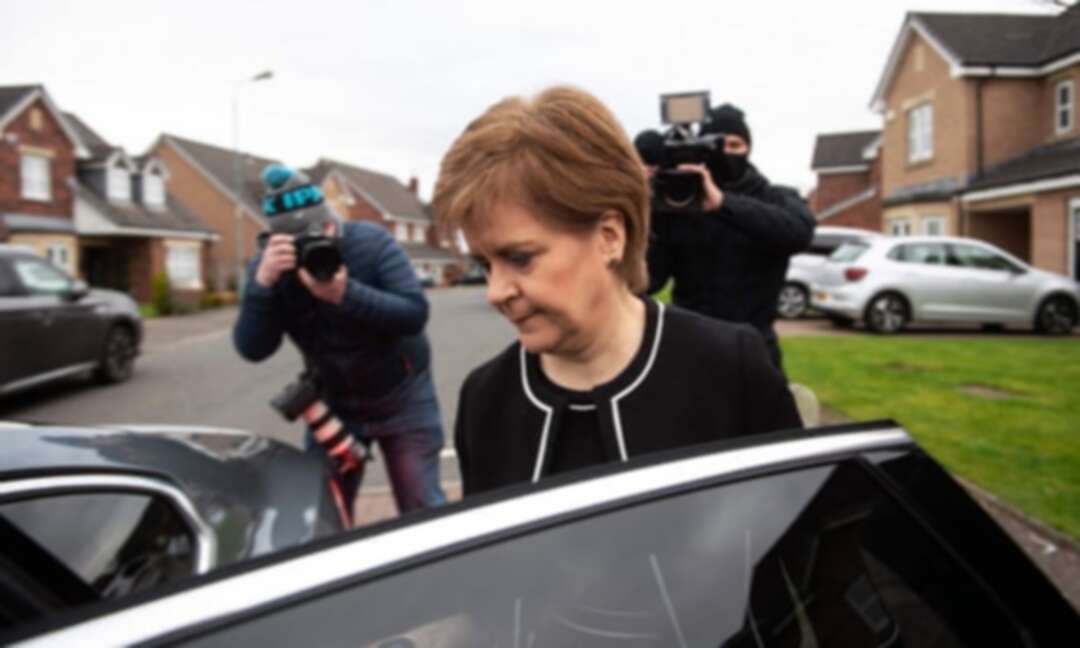 Nicola Sturgeon has been accused of misleading the Scottish parliament over her dealings with Alex Salmond, but not knowingly, in a highly critical report by MSPs.

A specially convened Holyrood committee voted by a 5-4 margin to find the first minister had misled parliament over her accounts of a meeting with Salmond, her former mentor, in April 2018.

Their report, small excerpts of which were controversially leaked last week, said there was clear evidence she breached the ministerial code by offering to intervene in a Scottish government harassment inquiry on Salmond’s behalf.

A majority of MSPs on the committee were dubious about Sturgeon’s testimony that she did not know of any prior concerns about Salmond’s behaviour, and said there was clear evidence she did breach the ministerial code.

“The committee notes that there is a fundamental contradiction in the evidence in relation to whether, at the meeting on 2 April 2018, the first minister did or did not agree to intervene. Taking account of the competing versions of events, the committee believes that she did in fact leave Mr Salmond with the impression that she would, if necessary, intervene.

“This was confirmed by Duncan Hamilton

That finding has stopped short of ruling Sturgeon misled parliament “knowingly”. Knowingly misleading parliament would be a clear breach of the ministerial code and a resignation matter.

That ruling, which caused a deep split in the committee, contradicts the findings on Monday of an independent inquiry into Sturgeon’s conduct, which exonerated her of several charges of breaching the ministerial code.

James Hamilton, Ireland’s former director of public prosecutions, said on Monday that while Sturgeon had had “regrettable” lapses of memory about her initial dealings with Salmond, he accepted her explanations of why she met the former first minister.

Despite Hamilton’s decision to clear her of breaching the code, Sturgeon still faces a vote of no-confidence motion tabled by the Scottish Conservatives in Holyrood later on Tuesday.

No other opposition party is expected to back it, given the Hamilton findings, but opposition leaders are likely to criticise Sturgeon’s conduct and the actions of her government.

The committee accused Leslie Evans, the permanent secretary and the Scottish government’s chief civil servant, of an “individual failing as significant” as the government’s corporate failures over the mishandling of the judicial review.

It stopped short of calling for Evans to quit but said “that those responsible should be held accountable”.The committee has, for the first time, published testimony from Ms A and Ms B, the two women officials whose accusations against Salmond triggered the Scottish government inquiry in January 2018, which in turn led to police launching a criminal investigation in autumn 2018.

Salmond comprehensively won his legal challenge against the internal inquiry in procedural grounds. A judge ruled the government’s decision to appoint a civil servant who had had prior contact with Ms A and Ms B as the investigating officer rendered the inquiry unlawful and gave “the appearance of bias”.

Salmond was later acquitted of 14 charges of sexual assault, including one of attempted rape, after a high court trial in March 2020.

However, Ms A and Ms B told the committee last week they believed there was a poor organisational culture within the government when Salmond was first minister. There was “complicity across a number of fronts” in terms of people not challenging any allegedly inappropriate behaviour by Salmond.

In a joint statement appended to the committee’s report, the women said: “There were not clear boundaries for what was appropriate behaviour, or leadership in the organisation to challenge behaviours.”

Describing the possibility of making a complaint, one of the women commented that “making complaints was simply not the done thing”. They both said there was no promotion or encouragement to use the Scottish government’s harassment policy.

In a detailed 192-page report, the committee accused Sturgeon, her deputy, John Swinney, and government officials of “significantly” impeding their inquiry by delaying the release of documents, including legal papers, which damaged public confidence.

They were “dismayed” Evans did not grasp how problematic it was to appoint an investigating officer, Judith Mackinnon, who had had significant prior contact with the complainers. That “significant failure” cost the taxpayer money.

“Our inquiry was a chance to reflect on what went wrong with the Scottish government processes and ensure that the failings these women experienced never happen again.

“There are undoubtedly some extremely serious findings in our report and it was clear to the committee that there were serious flaws made in the government’s application of its own process. The government must address these to ensure anyone who experiences sexual harassment has the confidence to come forward.”