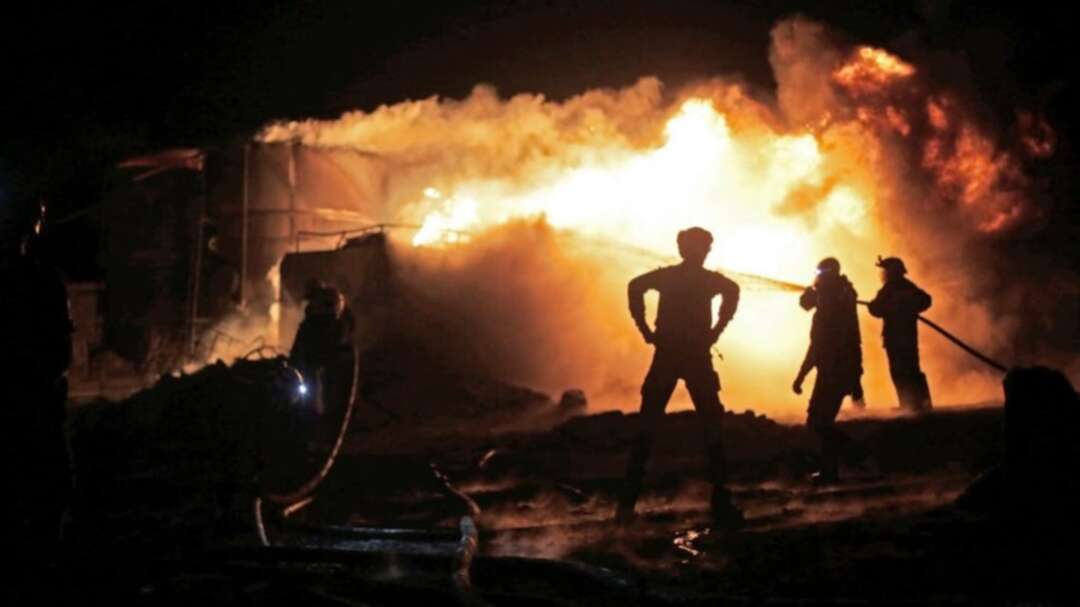 Members of the Syrian Civil Defense (White Helmets) extinguish a fire which reportedly erupted after a bombardment from unknown sources of makeshift oil refining installations in the Tarhin area, near the Turkish-controlled city of al-Bab in the north of Aleppo province, on March 5, 2021. (AFP)

The Syrian Observatory for Human Rights said a series of strikes launched from Russian warships and by allied Syrian government forces hit the makeshift refineries in Aleppo province on Friday night, causing a massive blaze in the area controlled by Turkey and its Syrian rebel proxies.

The Britain-based monitor “documented the deaths of four people, while 24 others sustained various injuries and burns” in the attacks near the town of Jarablus.

At least one Syrian rebel was among the dead, said Observatory head Rami Abdul Rahman.

Rescue workers spent hours trying to extinguish the fire which spread to about 30 oil tankers, according to the war monitor.

Oil installations in Turkey-controlled parts of Aleppo have come under repeated attack in recent months although Moscow and the Syrian regime have not claimed responsibility.

In January, unidentified drones also hit oil refineries in Turkish-held areas of Aleppo, causing a large fire, according to the Observatory.

Syria’s war has killed more than 387,000 people and displaced millions since starting in 2011 with a brutal repression of anti-government protests.

It later evolved into a complex conflict involving extremists and foreign powers.

Northern neighbor Turkey has seized control of several regions inside Syria in military campaigns against ISIS and Kurdish fighters since 2016.