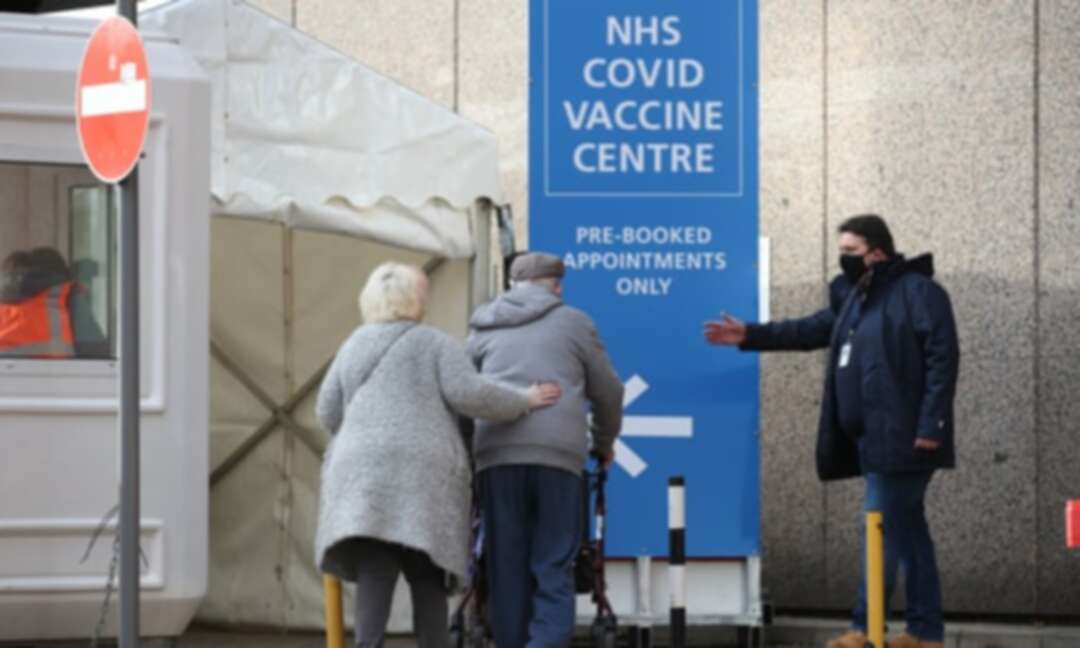 Members of the public arrive to receive their Covid-19 vaccinations at the Olympic Office Centre, Wembley, north London.

The first 24-hour vaccination centres will be piloted in London before the end of January, the UK’s vaccines minister has said.

Nadhim Zahawi said that by the beginning of February the scheme would be under way in hospitals in the capital and also pledged that 50 large vaccination centres would be open. He said that at present about 140 people a minute were being vaccinated against Covid-19.

Zahawi, who later said he had a “big worry” about vaccination rates among BAME communities, said that from Monday “in some areas where they’ve done the majority of over-80s, letters are going out to the over-70s and those who are clinically extremely vulnerable”.

But he argued that for the most vulnerable cohort of over-80s, 24-hour centres were not the most important component of the government’s programme.

Due to limited supply, the vaccine “needs to get into the arms of the most vulnerable” first, Zahawi said.

Describing the vaccination programme as a “race against death”, Zahawi said supply “remains challenging” and is the limiting factor in the rollout of coronavirus jabs.

“We now have built a deployment infrastructure that can deploy as much vaccine as it comes through. And so it’s the vaccine supply – which remains lumpy, it remains challenging, you may have read over the weekend probably some of the challenges around Pfizer and of course Oxford/AstraZeneca – but I’m confident we can meet our target mid-Feb,

He later told the BBC Radio 4’s Today programme that on Monday the proportion of care home residents vaccinated so far would go past 50%.

Asked if people should be allowed to work in care homes without having been vaccinated, he said: “We’re not the sort of country that forces people to take vaccines, we want to do it by persuasion.”

He said he disagreed with the owner of a plumbing company who said he would not employ anyone who had not had a vaccine, calling it a “discriminatory” approach.

He added that he was concerned about whether minority groups would be vaccinated at high enough rates.

As well as being disproportionately likely to die of the virus, polls have found that black, Asian and minority ethnic people are less likely to want the vaccine. Fifty seven per cent of BAME respondents to a Royal Society for Public Health survey in December said they were likely to accept a vaccine, against 79% of white respondents.

“My big worry is if 85% of the adult population gets vaccinated, if the 15% skews heavily to the BAME community the virus will very quickly infect that community,” Zahawi told BBC Radio 4’s Today programme. “People have some hesitancy … we are there to answer their questions.”

Zahawi’s update on progress with the government’s coronavirus vaccination programme comes as letters offering appointments to about 4.6 million people over 70 and 1 million extremely vulnerable people are sent out this week.

He repeated the government’s target, made on Sunday by the foreign secretary, Dominic Raab, of offering all adults a first dose by September.He said that once the most vulnerable cohorts had been vaccinated in phase one, in phase two his “very strong instinct” was to prioritise other groups likely to come into contact with the virus more often than others.

“Those who their work, through their profession, may come into contact with the virus – police men and women, shop workers, teachers, incredibly important because we want to make sure schools reopen fully … should be prioritised,” he said.

Meanwhile, the national medical director for the NHS in England, Prof Stephen Powis, said he was confident that everyone who had had their first dose of the Pfizer vaccine would get their second.

He told ITV’s Good Morning Britain: “We’ve been planning this, this change, this extension in the time of the second dose

He said the UK had the guaranteed supplies of both the Pfizer and the AstraZeneca vaccines to fulfil that pledge.

The Welsh first minister, Mark Drakeford, told Today that Wales’s supply of the Pfizer vaccine had to last until February and therefore was not being used all at once.

“There will be no point, and certainly it will be logistically very damaging to try to use all of that in the first week and then to have all our vaccinators standing around with nothing to do for another month,” said Drakeford, whose stance has been heavily criticised for meaning that some vaccinations will be deliberately delayed.

He said: “We will vaccinate all four priority groups by the middle of February, alongside everywhere else in the UK.”

EHRC undermined by pressure to support No 10 agenda, says ex-chair New No 10 team take on Cummings' legacy of chaos and acrimony