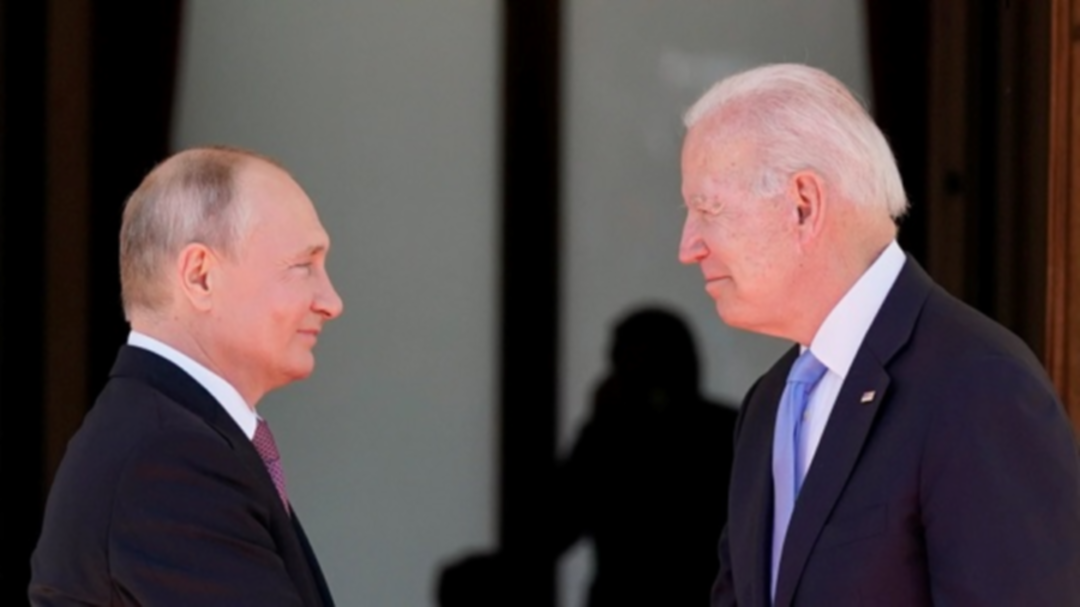 The Arab News reported, citing media outlets, US President Joe Biden met with G7 allies Thursday to hammer out a raft of new sanctions against Russia after it invaded Ukraine, and will later speak to the American people on a crisis that he warns will cause “catastrophic loss of life.”

The official said: “President Biden and leaders are discussing their joint response to President Putin’s unprovoked and unjustified attack on Ukraine."

Before the G7 gathering, Biden first huddled with his National Security Council in the Situation Room, the White House said. His speech to the nation was scheduled for 12:30 p.m. (1730 GMT).

For weeks, as Russia built up tens of thousands of troops and heavy weapons on Ukraine’s border, Biden has led NATO and other European allies in trying to craft a package of what Washington says are “unprecedented” sanctions as a deterrent.

Now that the deterrent has failed, the effort is likely to see rapid escalation to inflict real pain on Russia’s already shaky economy.

President Zelenskyy reached out to me tonight and we just finished speaking. I condemned this unprovoked and unjustified attack by Russian military forces. I briefed him on the steps we are taking to rally international condemnation, including tonight at the UN Security Council.

“The United States and its allies and partners will respond in a united and decisive way. The world will hold Russia accountable,” Biden said in his first comments late Wednesday in Washington, after Russian missiles began to rain down on Ukraine.

Biden also held a phone call with his Ukrainian counterpart Volodymyr Zelensky, saying afterwards that he had promised to “provide support and assistance to Ukraine and the Ukrainian people.”

The US president noted that Zelensky had requested him to “call on the leaders of the world to speak out clearly” against Putin’s “flagrant aggression.”

On Tuesday, after Putin first announced he would send troops as “peacekeepers” to two small areas already controlled by Moscow-backed separatists, Western countries swung into action with a first round of sanctions.

And on Wednesday, as the Russian invasion force became clearly primed to attack, Biden announced he was imposing sanctions on the Nord Stream 2 natural gas pipeline from Russia to Germany — one of energy-rich Moscow’s highest-profile geopolitical projects.

Germany had earlier announced it would block the pipeline from opening for deliveries.

NATO, set to hold an emergency summit on Friday, on Thursday said it was bolstering its troop presence on its eastern flank and putting hundreds of warplanes and ships on alert.

NATO chief Jens Stoltenberg said: “Make no mistake: We will defend every ally against any attack on every inch of NATO territory."

European Commission President Ursula von der Leyen and Stoltenberg both called the invasion a “barbaric” attack on an independent nation that threatened “the stability in Europe and the whole of the international peace order.” The EU scheduled an emergency summit in Brussels.

But no one promised to move in militarily and defend Ukraine at the risk of touching off a bigger European war. Ukraine is not a NATO member, and the US and its Western allies have said for weeks that they would not send troops into the country.

Now, US officials are teeing up tougher new sanctions that could include targeting bigger banks, more oligarchs close to Putin and, crucially, a ban on exports to Russia of high-tech equipment and components. It was not clear how many of these measures would be announced Thursday.

Germany’s vice chancellor, Robert Habeck, signalled Thursday there’d be a “strong sanctions package” that will “cut off the Russian economy from industrial progress, will attack and freeze assets and financial holdings, and will dramatically limit access to the European and American markets.”

Meanwhile, Prime Minister Boris Johnson said Britain and its allies would unleash a massive package of economic sanctions to hobble the Russian economy.

Johnson said in a televised address to the nation: “Today, in concert with our allies, we will agree a massive package of economic sanctions designed in time to hobble the Russian economy."

Joe Biden sanctions Russia for 'beginning' an invasion of Ukraine

He said the West must end its reliance on Russian oil and gas which had given Putin a grip over Western politics.
“Our mission is clear: diplomatically, politically, economically, and eventually military, this hideous and barbaric venture of Vladimir Putin must end in failure.”

He told Russians he did not believe the invasion was being carried out in their name, while he vowed to support Ukraine until the flame of freedom “burns bright again.”

He said: “I don’t believe that the Russian dictator will ever subdue the national feeling of the Ukrainians and their passionate belief that their country should be free."

“I say to the British people, and all who have heard the threats from Putin against those who stand with Ukraine: We will of course, do everything to keep our country safe.”

In earlier comments on Twitter, the British leader called the invasion a “catastrophe” for Europe, and said he would talk to other G7 group of rich nations.

He said: “I will also speak to fellow G7 leaders and I am calling for an urgent meeting of all NATO leaders as soon as possible."