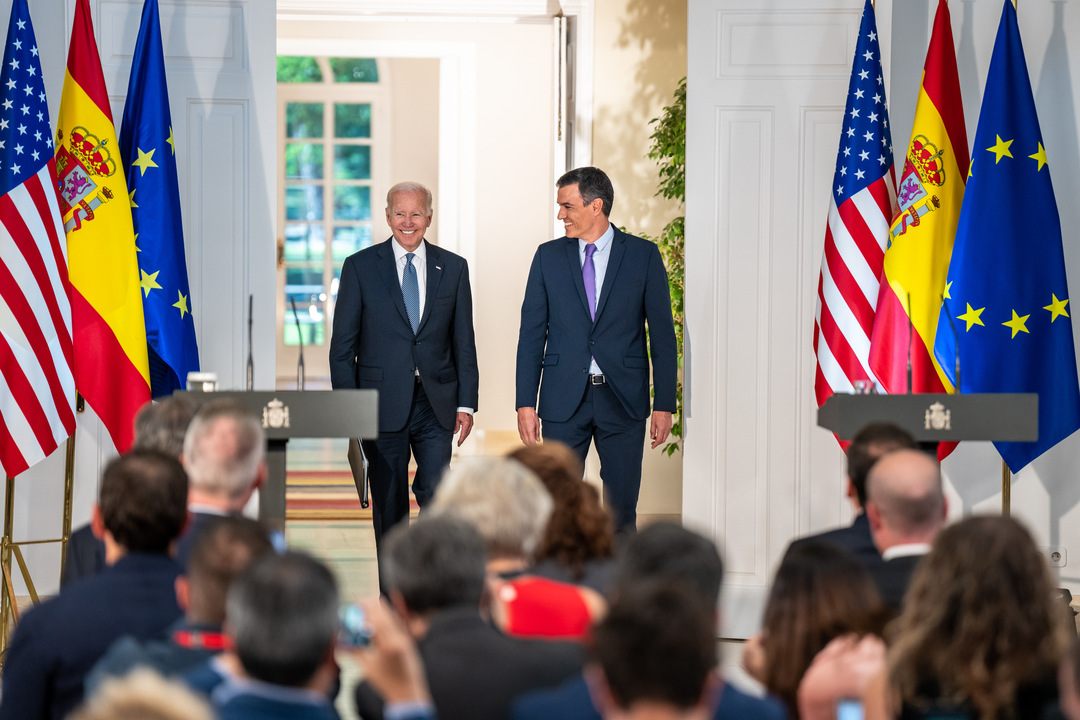 This morning I met with President Sanchez castejon and thanked him for hosting the NATO Summit and for Spain’s 40 years of contributions to Transatlantic security - Pic. President Biden's official Twitter account

The Anews reported, citing the AFP, President Joe Biden on Wednesday (June 29) announced US reinforcements of NATO forces in Europe, saying the alliance is needed more today "than it ever has been."

He told a summit of the transatlantic alliance being held in Madrid that NATO will be "strengthened in all directions across every domain -- land, air and sea."

- Boosting the fleet of US naval destroyers from four to six in Rota, Spain.

- A permanent headquarters in Poland of the 5th Army Corps.

- An "additional rotational brigade" in Romania, consisting of "3,000 fighters and another 2,000-personnel combat team."

- Two additional squadrons of the F-35 stealth plane to Britain.

- "Additional air defence and other capabilities in Germany and in Italy."

Biden said: "Together with our allies we're going to make sure that NATO is ready to meet the threats from all directions across every domain.”

He said: "In a moment where (Russian President Vladimir) Putin has shattered peace in Europe and attacked the very, very tenets of rule-based order, the United States and our allies, we're going to step up.”

Referring to NATO unity on accepting the applications of previously neutral Finland and Sweden to join the alliance, Biden said Putin's strategy in invading Ukraine had backfired.

Biden said: "That's exactly what he didn't want but exactly what needs to be done to guarantee security for Europe.”

Stoltenberg commented that the expansion of NATO was "the opposite" of what Putin hoped for.

A White House statement detailing the reinforcements said that in the Baltics, "we will maintain persistent, heel-to-toe presence in the region and will intensify training."

This will include "armoured, aviation, air defence, and special operations forces, building further interoperability and intensified training with these allies, and enhancing our ability to quickly reinforce and provide combat-credible defences."

The additions to the US presence are part of a much wider expansion of NATO capabilities being announced in Madrid, as well as a new strategic blueprint which will highlight the threat from Russia but for the first time also name China as a challenge.

White House spokesman John Kirby told reporters that the US military expansion in Europe comes on top of reinforcements already sent in the wake of Russia's Ukraine invasion.

Kirby said: "Since the invasion itself, (Biden) ordered the deployment or extension of over 20,000 additional forces to Europe in response to the crisis, all across the domains... which brought our total to over 100,000 service members across Europe.”