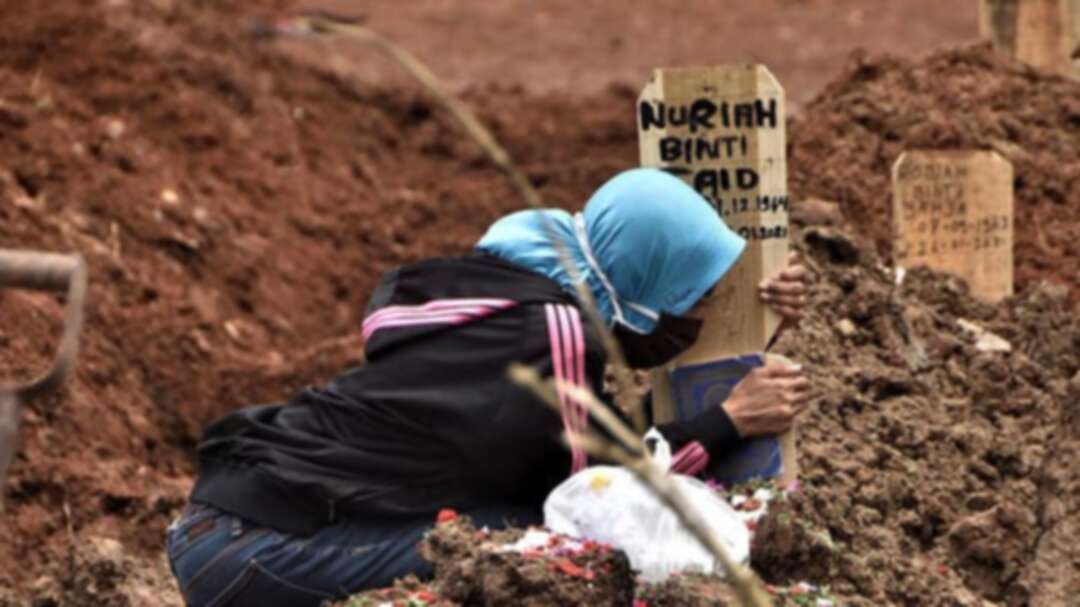 A woman grieves over the grave of a loved one who died of the COVID-19 coronavirus at a cemetery in Bekasi on January 28, 2021, after Indonesia passed more than one million coronavirus cases on January 26. (AFP)

Meanwhile, infections and deaths are rising faster than ever. Even if the vaccination program goes smoothly, it will be months before the general population starts to be inoculated, health experts say.

“Disaster,” said Pandu Riono, a University of Indonesia epidemiologist when asked what he expects of the coming months.

“Healthcare will have already collapsed. Already there are many stories about people dying on arrival, in emergency and on the way because they are searching for a hospital. Even the graveyards are running out of space.”

Budi Gunadi Sadikin, the new health minister, told health ministry officials of his concerns about the vaccination rollout soon after his appointment in late December, a source familiar with the program said. 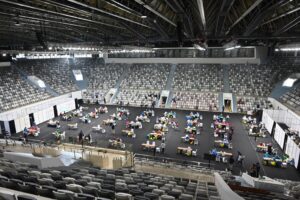 Health workers conduct a mass vaccination for the Covid-19 coronavirus at Istora Senayan stadium in Jakarta on February 4, 2021. (AP)

The health ministry declined to comment on the report.

Asked about claims the pandemic is spreading faster than vaccines can be administered, COVID-19 task force spokesman Wiku Adisasmito said the government was doing its best with available resources, and rather than focus on “negative predictions” it was working hard to implement “comprehensive health protocols, vaccines and clinical care at the same time”.

In its first phase, Indonesia plans to vaccinate around 1.5 million healthcare workers by February 21, a goal the health ministry says is on track.

Jokowi, as the president is known, has said he hopes 181 million people will be vaccinated in the next 12 months, or about 1 million per day for a two-dose vaccine.

Indonesia is currently vaccinating about 50,000 people per day, according to the health ministry.

The logistics and cold chain requirements in the sprawling archipelago of 270 million people, strung across more than 17,000 tropical islands, uniquely complicate the rollout.

From the capital Jakarta, vaccines will be sent out to more than 10,000 health centres across the country, some in remote areas with limited resources, meaning even keeping the vaccines cool will prove a challenge. 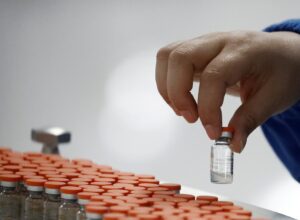 “Just imagine you have a fridge full of vaccines and the power goes out,” said Ines Atmosukarto, a molecular biologist who works on vaccine development. “All those doses will have to go in the bin.”

In places such as Bengkulu, on Sumatra island, some health centers do not have any cold storage or stable electricity, said Herwan Antoni, head of the local health agency.

Senior health ministry official Siti Nadia Tarmizi denied shortfalls in the country’s cold chain, saying it met WHO requirements after securing medical fridges, some of which were solar powered.

The ministry, she added, has also enlisted Unilever Indonesia, which is providing more than 200 ice cream refrigerators for vaccines.

The first phase was always going to be the easiest, say health experts, given there is good data of healthcare workers and most are willing recipients.

But there are early signs that mistrust could be a stumbling bloc.

In Gowa, in South Sulawesi province, up to 200 medical workers delayed their shots, some believing it had dangerous side effects or was haram - forbidden for Muslims, or becausethey had co-morbidities, said Gaffar, a senior official there who uses one name.

In Papua, some medical workers rejected vaccines in fear of a “global antichrist conspiracy”, said Ni Nyoman Sri Antari, the head of the health office in the provincial capital Jayapura. 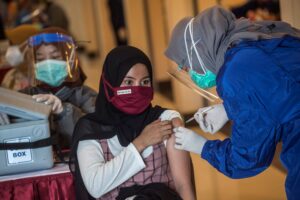 A health worker administers a vaccine for the COVID-19 coronavirus in Surabaya on January 31, 2021. (AFP)

The health ministry said these figures were inaccurate and most healthcare workers had re-registered.

But a December 2019 survey by Indonesian pollster Saiful Mujani Research and Consulting showed only 37 percent of 1,202 respondents were willing to be vaccinated, 40 percent undecided and 17 percent would refuse.

Public health experts say the glitches are even more reason to double down on the basics of testing, tracing and isolating.

“They need to go back to good old-fashioned public health measures,” said Ines, the molecular biologist. “It is not as sexy...we like to think there is a magic solution in the form of a pill or a jab.”

Even as the inoculations begin, the pandemic is worsening.

Cases have surpassed one million with the rate of people tested found to be COVID-19 positive hitting 35 percent recently - one of the world’s highest and an indicator that infections are much more widespread.

Epidemiologists say there may be over 3 million, with a death toll well above the 31,000 recorded.

Indonesia has secured nearly 330 million vaccine doses from China’s Sinovac, AstraZeneca and Novavax, but currently has only around 3 million ready to use doses of Sinovac’s CoronaVac.

Dicky Budiman, a pandemic researcher at Australia’s Griffith University, said it would take two, possibly three years, to complete the program, rather than the ambitious January 2022 target.