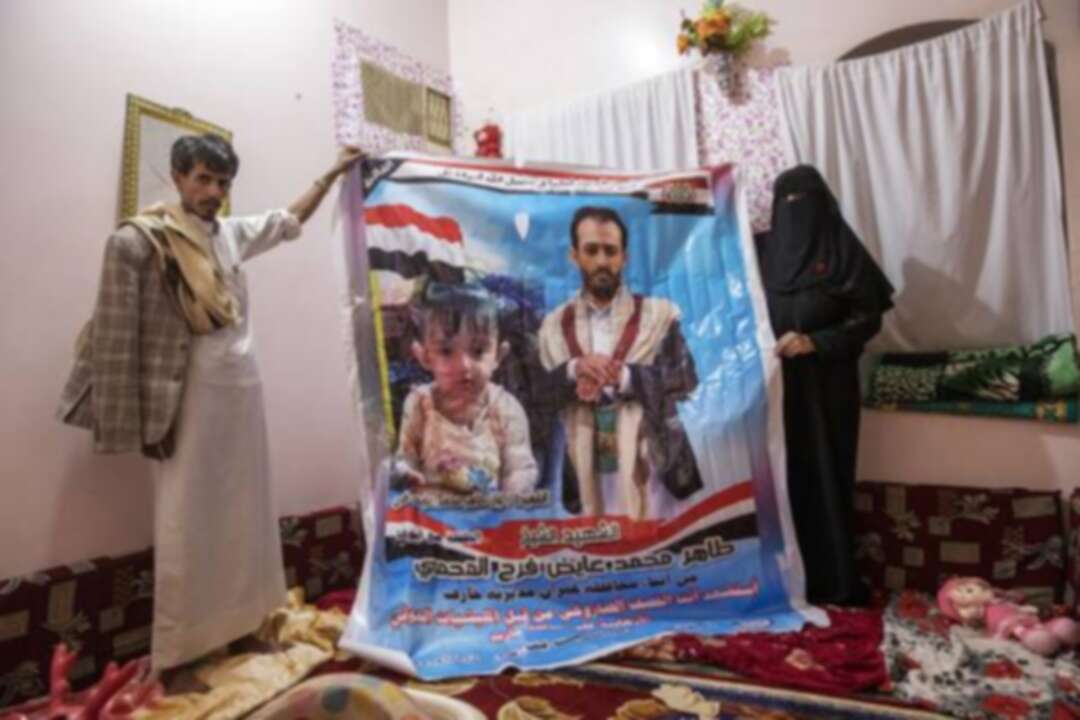 A ather and a daughter killed by al-Houthi

AP reported a full story on the growing numbers of graves that mark the cost of Yemen's war. It starts with a grave that has one tombstone stands out with two “martyrs” listed — a father and his young daughter. Yemen's war

Taher Farag and his 2-year-old Liyan were inseparable, their family say. So earlier this month, when Farag drove to the market to buy food for his wife to make lunch, he took Liyan with him.

Along the way, he stopped at a gas station in Marib’s Rawdah neighborhood to fill his tank. It was then, as they waited in line, that the ballistic missile fired by Yemen’s Houthi rebels hit the station, followed by the blast of an explosives-laden drone. The gas station went up in a ball of flame, incinerating vehicles in line.

At least 21 people were killed, including Farag and his daughter, in the June 5 attack, according to Liz Throssell, a spokeswoman for the U.N. High Commissioner for Human Rights.

It was the deadliest single attack in the monthslong grind of an offensive launched by Houthi rebels trying to capture Marib, the last stronghold of the Yemeni government in the country’s north. Since February, the rebels have been waging their assault, making only slow progress as Saudi-backed government fighters dig in to defend the city and Saudi airstrikes inflict casualties on the rebels. Yemen's war

The Houthis have fired ballistic missiles and sent drones into Marib as well, often hitting civilian areas and camps for displaced people. More than 120 civilians have been killed, including 15 children, and more than 220 wounded in the past six months, according to the government.

At home, Farag’s wife Gamila Saleh Ali heard the explosion. She didn’t think her husband and daughter were in danger — there are plenty of explosions in Marib. Still, she called his phone to be safe. There was no answer. She called again and again, each time no answer.

Then came the scream of her husband’s mother, who lives in the same building. She went out and found her family weeping. “I realized that Liyan and her father were martyred,” the 27-year-old said. “I returned to my room and prayed to God.”

The 32-year-old Farag was once a farmer in his hometown of Kharif in northwestern Yemen, before fleeing with his family after the Iran-backed Houthis overran most of the country’s north in 2014, including the capital, Sanaa.

The damaged car belonging to 32-year-old Taher Farag and his two-year-old daughter Liyan Taher, who were both killed on June 5, 2021 from a ballistic missile and an explosive-laden drone fired by Yemen's Houthi rebels hitting a fuel station in the Rawdha neighborhood of the central city of Marib, Yemen, Sunday, June 20, 2021. (AP Photo/Nariman El-Mofty)

Like many driven from their homes, he settled in Marib, a seemingly safe refuge outside Houthi territory. He was able to find work driving a taxi. The area is now home to some 2.2 million displaced people, many of them crowded into camps on the city’s outskirts, according to official statistics.

They find themselves caught in one of the last active fronts in a war that has dragged on for nearly seven years, between the Houthis and the government, which controls much of the south and is backed by a Saudi-led coalition. The war has been largely stalemated for years but continues to wreak destruction, killing more than 130,000 people and spawning the world’s worst humanitarian crisis.

The same day as the strike on the gas station, an Omani delegation landed in Sanaa for talks with rebel leaders, including the group’s religious and military leader, Abdel-Malek al-Houthi. Pressure is mounting on the Houthis to stop their Marib offensive and agree on a nationwide cease-fire, paving the way for peace talks.

In the meantime, Marib’s residents endure the frequent blasts of missile and drone attacks.

Mohammed Ali al-Houthi, the head of the rebels’ Supreme Revolutionary Committee, said the missile strike targeted a military position and called for an independent investigation. He did not provide evidence.

The gas station is located several hundred meters (yards) from the perimeter fence of a military camp.

“The blast was strong, so strong. It sent me flying far,” said one worker at the station being treated at Marib’s main hospital. His right leg was broken, and he was burned over much of his body. He spoke on condition he not be named for the safety of family living in Houthi-held territory.

“We found shrapnel and remains of burned bodies. There were screams,” said Eissa Mohammed, who lives across the street.

Farag and Liyan’s bodies, charred beyond recognition, were found inside his burned-out taxi, hugging each other, officials and family said.

“So we buried them in the same grave,” said Farag’s younger brother, Ayed. Yemen's war