Magawa the rat, who in a five-year career, sniffed out 71 landmines and dozens more unexploded items in Cambodia, and was awarded a gold medal for his heroism, is retiring from his job detecting landmines. rat

the seven-year-old African giant pouched rat is "slowing down" as he reaches old age, said his handler Malen. She wants to "respect his needs".

"Magawa's performance has been unbeaten, and I have been proud to work side-by-side with him," Malen added.

"He is small but he has helped save many lives allowing us to return much-needed safe land back to our people as quickly and cost-effectively as possible." 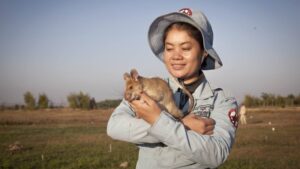 Magawa, who weighs 1.2kg (2.6lb) and is 70cm (28in) long, was trained by the Belgium-registered charity Apopo, which is based in Tanzania and has been raising the animals to detect landmines. He used to search a field the size of a tennis court in just 20 minutes - something Apopo says would take a person with a metal detector between one and four days.

Last week, Apopo said a new batch of young rats had been assessed by the Cambodian Mine Action Centre (CMAC) and passed "with flying colours".

Magawa, the group said, would stay in post for a few more weeks to "mentor" the new recruits and help them settle in.

Last September, Magawa was awarded the PDSA Gold Medal - sometimes described as the George Cross for animals - for his "life-saving devotion to duty". He was the first rat to be given the medal in the charity's 77-year history. rat

The sales of Meghan Markle’s book could be impacted due to a dispute Sanctions should be lifted before nuclear deal, Khamenei said in a televised speech