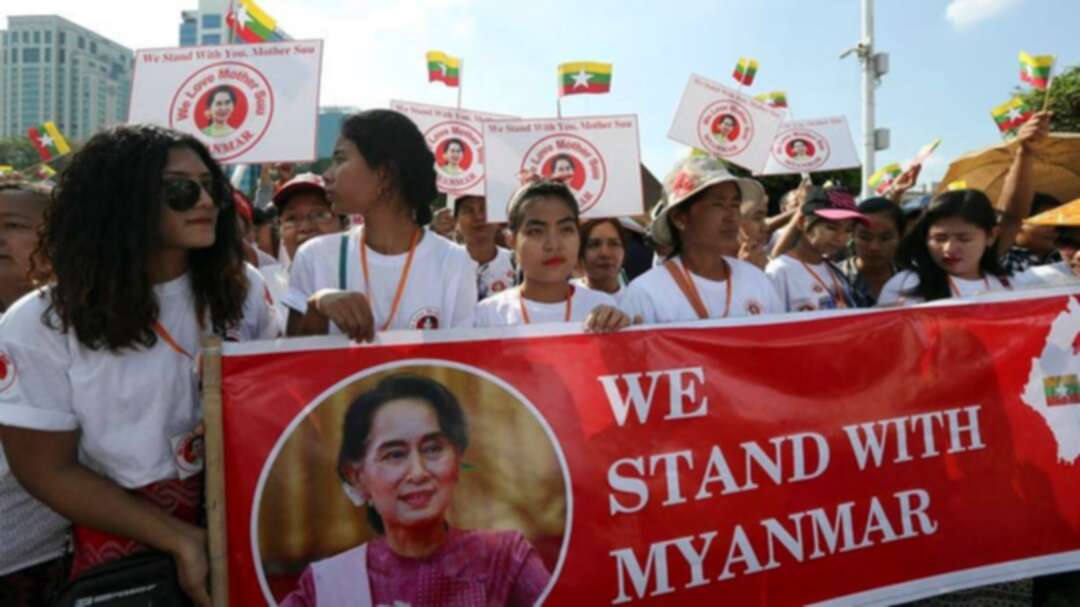 About 700 people rallied on December 1, 2019, in Yangon to show support for Myanmar’s leader, Aung San Suu Kyi, as she prepares to defend the country against charges of genocide at the UN’s highest court. (AP)

About 700 people rallied Sunday to show support for Myanmar’s leader, Aung San Suu Kyi, as she prepares to defend the country against charges of genocide at the UN’s highest court.

Members of Suu Kyi’s National League for Democracy party swelled the ranks in front of the colonial-era City Hall in Yangon, Myanmar’s largest city, as the crowd waved national flags and listened to music and poetry. A popular local singer told them “Mother Suu is the bravest human being in the world - her weapon is love.”

Many carried banners saying, “We stand with you, Mother Suu.”

The case before the International Court of Justice in The Hague relates to a harsh counterinsurgency campaign waged by Myanmar’s military against members of the country’s Muslim Rohingya community in August 2017 in response to an insurgent attack.

More than 700,000 Rohingya fled to neighboring Bangladesh to escape what has been called an ethnic cleansing campaign involving mass rapes, killings and the torching of homes.

The head of a UN fact-finding mission on Myanmar warned recently that “there is a serious risk of genocide recurring.”

Gambia filed the case at the ICJ, also known as the world court, on behalf of the Organization of Islamic Cooperation.

The case alleges that Myanmar’s actions against the Rohingya are “genocidal in character because they are intended to destroy the Rohingya group in whole or in part.”

Myanmar has strongly denied the charges but says it stands ready to take action against wrong-doers if there is sufficient evidence.

A statement on the website of the Ministry of the Interior said recently that the renewed international pressure on the country was due to a lack of understanding of “the complexities of the issue and the narratives of the people of Myanmar.”

Suu Kyi, who was awarded the 1991 Nobel Peace Prize for championing democracy and human rights under Myanmar’s then-ruling junta, will lead the delegation to The Hague in her capacity as a foreign minister.

Hearings are due to start on December 10. The case is expected to last several years.