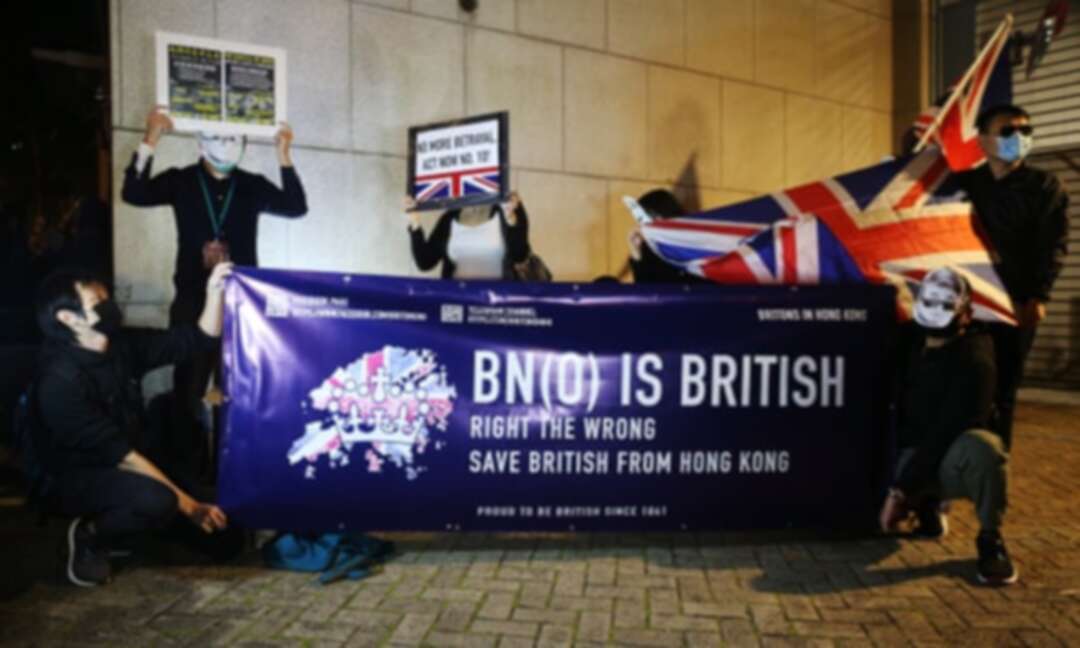 Hongkongers holding British national overseas passports can apply for UK visas from Sunday. The visas could eventually lead to citizenship.

China has announced it will no longer recognise the passports of British national overseas citizens just hours after the UK launched its scheme to give passport holders a path to residency as political freedoms decline in Hong Kong.

“From 31 January, China will no longer recognise the so-called BNO passport as a travel document and ID document, and reserves the right to take further actions,” the foreign ministry spokesperson, Zhao Lijian, told reporters, according to AFP.

It was still unclear whether or not the decision would affect the possibly tens of thousands of people who had been planning to leave Hong Kong since the scheme was announced last summer in response to national security legislation.

Hong Kong citizens and foreign residents are not required to show a passport when they depart Hong Kong international airport, instead using a smartcard ID.

Hong Kong’s web of nationalities may further complicate the matter as not all Hong Kong citizens hold Chinese passports, although all Hongkongers with historic familial ties to the mainland are considered Chinese citizens by Beijing.

Hundreds of thousands of people, chief among them 300,000 Canadians and 100,000 Australians, are also dual citizens in addition to the city’s nearly 3 million BNO citizens.

This weekend, the BNO citizens will be able to begin applying to take their families to the UK when an immigration scheme goes online on Sunday in Hong Kong, followed by a smartphone app on 23 February.

On Friday, the British prime minister hailed the scheme, which offers a route to British citizenship, saying it honoured the UK’s commitment to its former citizens.

“I am immensely proud that we have brought in this new route for Hong Kong BNOs to live, work and make their home in our country,” Boris Johnson said.

“In doing so we have honoured our profound ties of history and friendship with the people of Hong Kong, and we have stood up for freedom and autonomy – values both the UK and Hong Kong hold dear.”

Under the scheme, the UK estimates nearly 3 million Hongkongers and their dependents will be eligible to move to Britain for five years and apply for full citizenship.

It was soon followed by a wave of arrests of dozens of pro-democracy activists and politicians, including well-known names such as Joshua Wong, Agnes Chow and the media tycoon Jimmy Lai, who has been charged under the new security law.

China says the path to citizenship is a violation of international law and interferes with its internal affairs.

The Hong Kong dissident Lam Wing-kee, who moved to Taiwan in 2019 and reopened his bookstore Causeway Bay Books last year, told the Guardian he thought the scheme would be of great use to young people, including those who had already moved to Taiwan.

“Taiwan is still influenced by China. They worry whether Taiwan is safe. So people in their 20s, many want a life, and they want work, my thinking is they would rather go to the UK than Taiwan,” he said.

Between January and November 2020, the number of Hong Kong residents in Taiwan grew by 85% according to Taiwan’s mainland affairs council, from about 5,000 to 9,500.

While Taiwan is a democracy, Beijing’s Communist party considers the island part of its sovereignty territory and operates covert influence campaigns there.

The UK has said it was unclear how many BNO holders would make use of the scheme due to Covid-19. Applications for the visas open on Sunday followed by a digital version via smartphone app on 23 February.

Michael Mo, a district councillor in the Tuen Mun area of Hong Kong, was concerned that Hongkongers faced potential risks applying in person at the UK’s two visa application centres, one of which is in the pro-Beijing North Point district on Hong Kong Island, and the other nearby in Quarry Bay.

“Consider the visa centre has no diplomatic immunity and the

With restrictions on public gatherings limited due to Covid regulations, he said Hongkongers may have difficulty queueing outside the office and might prefer to wait until the app was ready in February.

Since 2014’s “umbrella revolution”, thousands of ordinary Hongkongers have faced prosecution for their political activities, with a sharp increase following 2019’s wave of democracy protests.

In the most recent case this week a 74-year-old activist, Koo Sze-yiu, received a four-month prison sentence on Thursday for desecrating the Hong Kong flag, according to the public broadcaster RTHK.

The agreement laid out the terms for Hong Kong’s return to Chinese sovereignty in 1997 after 150 years of colonial rule.

Under an arrangement known as “one country, two systems” Hong Kong was promised semi-autonomy until 2047 and a level of political freedom not known on the mainland, but many believe that arrangement is largely over as Beijing continues to tighten the screws.

In addition to a crackdown on political dissent, more hardline mainland officials have recently arrived in Hong Kong, signalling more changes in the near future.

Arrivals include a new anti-corruption chief, Shi Kehui, announced this week, and Xia Baolong, the new head of the Hong Kong and Macau affairs office installed last February, who is best known for demolishing underground churches elsewhere in China.