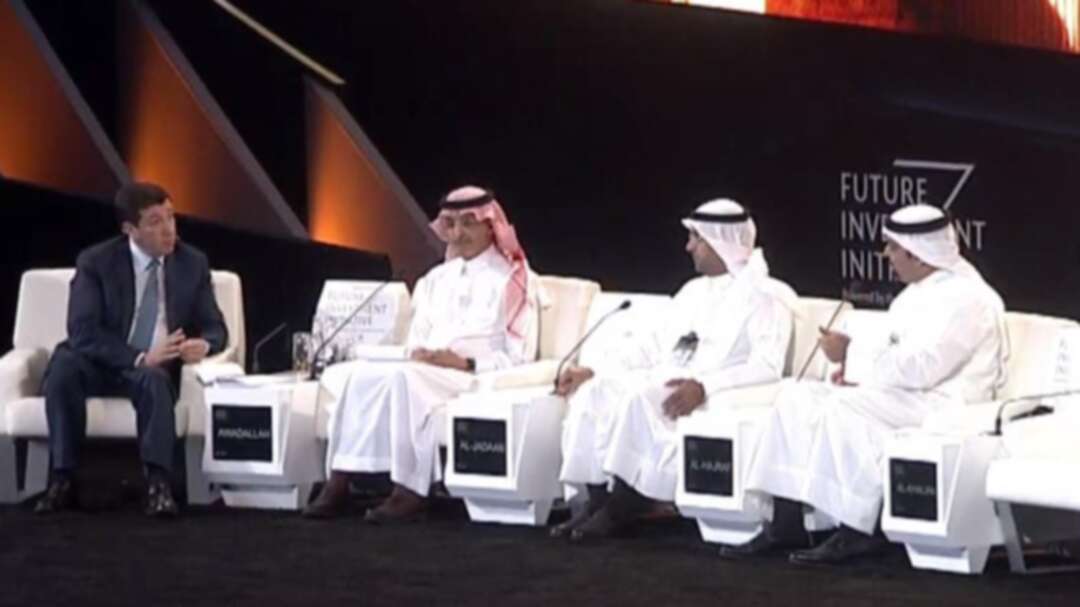 Kuwait's Minister of Finance highlighted that the GCC's economic agenda should be seperate from political differences. (File photo AFP)

The minister added that incoming foreign direct investments are a result of the ongoing economic reforms, particularly in the Kingdom of Saudi Arabia.

“Actual FDI is growing 10 percent. Also, local investment is coming in Saudi Arabia, as private investment has grown around 3 percent,” he added.

Al-Jadaan made the comments on a panel alongside his Kuwaiti and Bahraini counterparts, Naif Falah al-Hajraf and Sheikh Salman bin Khalifa Al Khalifa, respectively. The ministers discussed key factors that have made the region attractive for investment, and what was required to move forward.

“I think the reality is that decisions are being made every year to enhance the economic integration,” al-Jadaan added.

Most recently, Saudi Arabia jumped 30 places in the World Bank’s Ease of Doing Business 2020 Index, taking the 62nd position, making the Kingdom the world’s top improver. The results indicate that widespread social and economic reforms carried out by the country are bearing fruit.

However, this improvement comes amid a global economic slowdown. The International Monetary Fund (IMF) in its October 2019 World Economic Outlook cut its global growth forecast to 3 percent for 2019, its lowest level since 2008-2009. Geopolitical and trade tensions have also curbed growth prospects, hitting business confidence, investment activity, and global trade.

“When we talk about the process of reform that has been taking place … it is important to note that is not enough to create a portal, create a one-stop shop in front of a 30 year-old process; it is critical to take every step of the approval process and reengineer it,” said Bahrain’s finance minister Shaikh Salman bin Khalifa Al Khalifa.

During the same panel, Kuwaiti Minister of Finance al-Hajraf pointed out that oil indicators in the region are a “distorting factor”, and that there are other economic indicators to monitor.

Saudi Arabia’s oil GDP fell 3 percent this year, al-Jadaan said in the panel on Thrusday, while adding that non-oil GDP growth was flat at 2.9 percent.

The pace of reforms

Under the umbrella of Vision 2030, Saudi Arabia has been developing the National Transformation Program (NTP) over the last four years. The NTP is dedicated to engaging stakeholders in identifying challenges and creating solutions for the reforms program’s initiatives.

“I think the country

Reeve, however, said that additional transparency and regulatory reforms are needed in order to encourage more foreign investments in the region overall.

“It is vital that foreign investors feel that they have a level playing field with domestic firms, and that there is a transparent and predictable regulatory environment in place. The lack of such an environment is the main reason why the MENA region has historically found it difficult to attract FDI outside of energy and related sectors,” he added.

Earlier this year, Kuwait announced that its oil sector grew at 1.3 percent for Q1 2019 and non-oil sector expanded at 4.1 percent.

The International Monetary Fund (IMF) announced in March that it expects Bahrain’s economy to grow around 1.8 percent in 2019.

Al-Hajraf stressed that private firms must also play their role in transforming how the region does business.

“The time has come for the government to zoom from the operation and leave the room for the private sectors to lead the economy and this is what we are emphasizing on,” he said.

Al-Hajraf later added that the economic agenda of the Gulf Cooperation Council (GCC) should not be impacted by political differences.

“What has been achieved under the GCC umbrella is too good to let go,” he said, adding: “We have our differences, we have to address the differences and work it out in a very functional way.”

The main topics discussed at FII in Riyadh this year were climate change, technology, entertainment, and emerging economies. Since the launch of Vision 2030 in 2016, Saudi Arabia’s social reforms have opened up untapped sectors for the Kingdom, such as entertainment and tourism.

However, analysts told Al Arabiya English that the policymakers in Saudi Arabia and the region should continue to push ahead with additional economic diversification reforms in order to attract investments – particularly to support small and medium enterprises (SMEs).

“The need to invest and set up a functional SME sector is still not fully understood. In the global economy, SMEs are main driver for a sustainable economy and provider of jobs,” said Cyril Widdershoven, MENA analyst and director of Netherlands-based consultancy Verocy.

“Currently, the main risk is that there is still an approach to address and invest only in flashy high-profile projects or high-tech,” Widdershoven, who was also a participant at FII 2019, told Al Arabiya English.

He added that there needs to be an emphasis on sectors other than technology or entertainment in Saudi Arabia and the Arabian Gulf, such as ports, airports, mining, and education.

The three-day conference discussed themes ranging from sustainibility, to sport, African investment, and the Aramco initial public offering (IPO). Sources at the conference told Al Arabiya that the much-anticipated Saudi Aramco IPO will be listed on the Tadawul on December 11, 2019.

The issue of radicalisation only keeps on growing in Europe Roads still blocked, anti-government protests continue in Lebanon