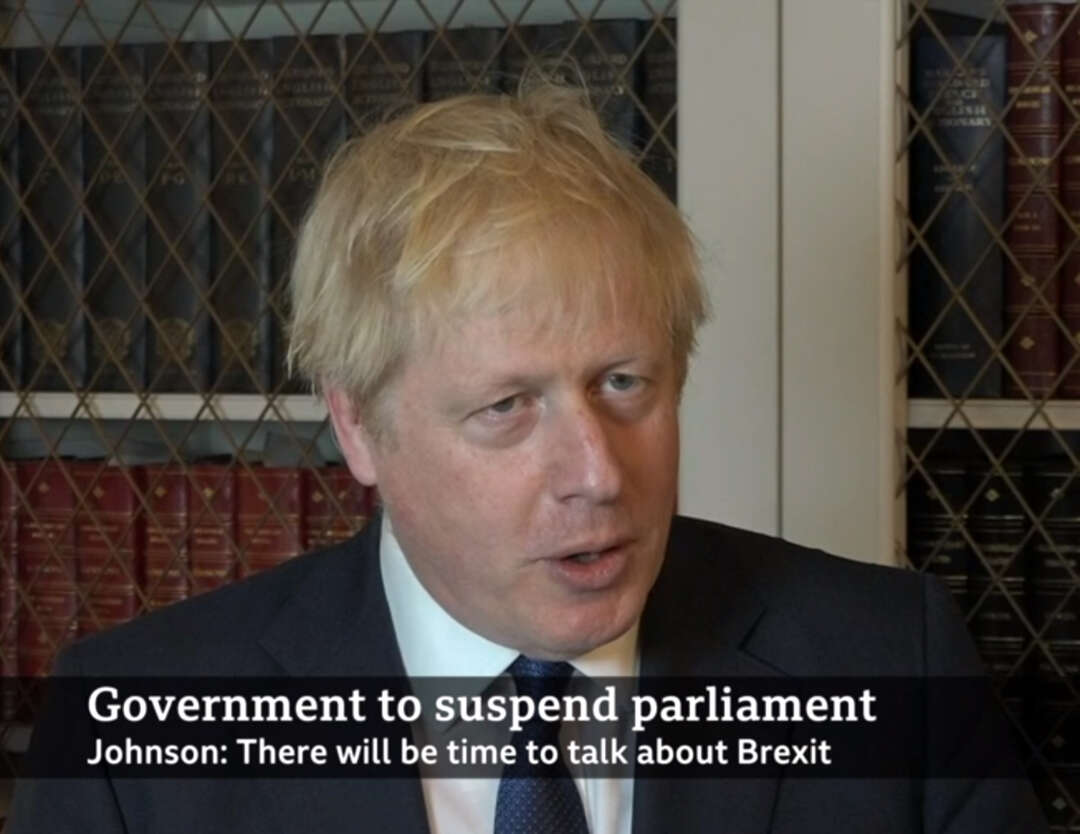 The government has asked the Queen to suspend Parliament just days after MPs return to work in September - and only a few weeks before the Brexit deadline.

Boris Johnson said a Queen's Speech would take place after the suspension, on 14 October, to outline his "very exciting agenda".

But it means MPs are unlikely to have time to pass laws to stop a no-deal Brexit on 31 October.

He warned it could lead to a vote of no confidence in Mr Johnson, adding: "This government will come down."

But the prime minister said it was "completely untrue" to suggest the suspension was motivated by a desire to force through no deal.

He said he did not want to wait until after Brexit "before getting on with our plans to take this country forward", and insisted there would still be "ample time" for MPs to debate the UK's departure.

"We need new legislation. We've got to be bringing forward new and important bills and that's why we are going to have a Queen's Speech," he added.

The idea of shutting down Parliament - known as prorogation - has caused controversy, with critics saying it would stop MPs being able to play their democratic part in the Brexit process.

A number of high profile figures, including former Prime Minister John Major, have threatened to go to the courts to stop it, and a legal challenge led by the SNP's justice spokeswoman, Joanna Cherry, is already working its way through the Scottish courts.

BBC royal correspondent Jonny Dymond said the precedent was for Parliament to be suspended before a Queen's Speech, and it would be "impossible" for the Queen to reject the government's request to do so now.

He said that convention lifted the pressure off the Queen and to some degree, in some people's eyes, depoliticises it.

Laura Kuenssberg said only a small number of government ministers knew about the plan in advance, but the government would argue it was "a bog standard Queen's Speech process", despite all of the surrounding noise. 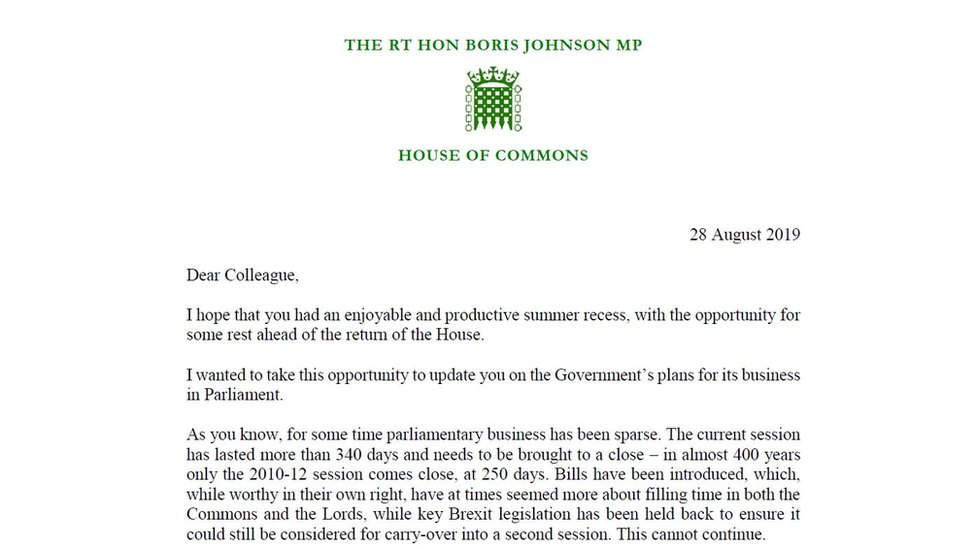 The PM has written to MPs to outline his plan

The PM says he wants to leave the EU on 31 October with a deal, but it is "do or die" and he is willing to leave without one rather than miss the deadline.

That position has prompted a number of opposition MPs to come together to try to block a possible no deal, and on Tuesday they announced that they intended to use parliamentary process to do so.

Although they remained tight lipped about the exact plan, it was thought Labour leader Jeremy Corbyn would call for an emergency debate in the Commons next week, giving MPs a chance to lay down legislation designed to ultimately stop a no-deal exit.

But if Parliament is suspended on 10 September, as is suggested, it will only give opponents a few days next week to push for their changes.

Scotland's First Minister Nicola Sturgeon said MPs must come together to stop the plan next week, or "today will go down in history as a dark one indeed for UK democracy".

Mr Johnson has written to MPs to outline his plan, adding: "There will be a significant Brexit legislative programme to get through but that should be no excuse for a lack of ambition!"

He also called on Parliament to show "unity and resolve" in the run up to the 31 October so the government "stands a chance of securing a new deal" with the EU.

"In the meantime, the government will take the responsible approach of continuing its preparations for leaving the EU, with or without a deal."

Mr Grieve - a former attorney general - told BBC Radio 5 Live: "If the prime minister persists with this and doesn't back off, then I think the chances are that his administration will collapse.

"There is plenty of time to do that if necessary

Labour deputy leader Tom Watson tweeted that the move was an "utterly scandalous affront to our democracy".

The leader of the Liberal Democrats, Jo Swinson, said it was a "dangerous and unacceptable course of action".

"Shutting down Parliament would be an act of cowardice from Boris Johnson," she said. "He knows the people would not choose a no deal and that elected representatives wouldn't allow it. He is trying to stifle their voices."

But Conservative Party Chairman James Cleverly defended the plan as what "all new governments do".