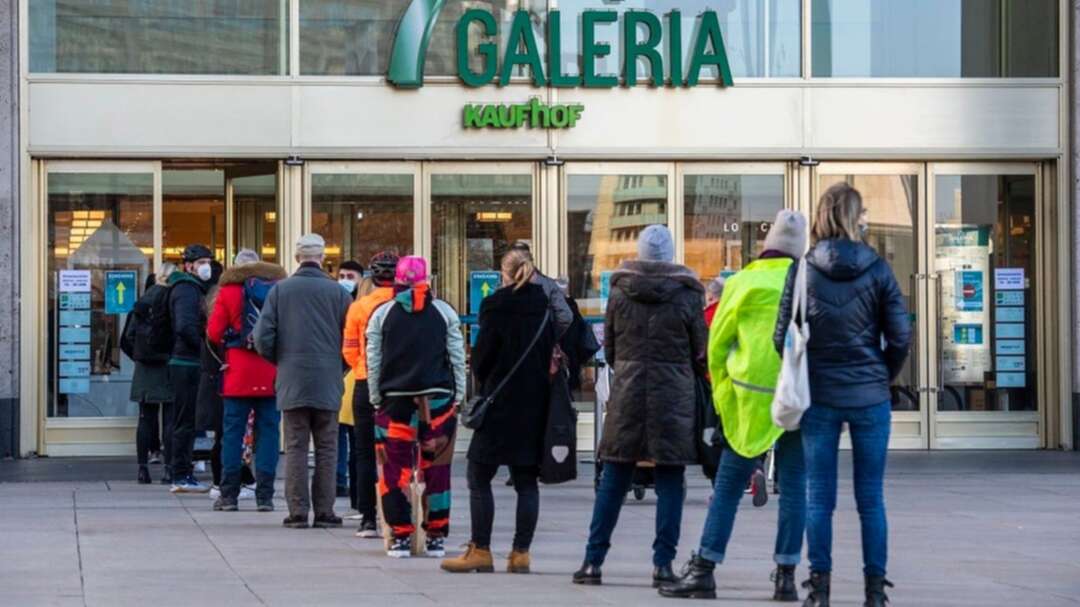 People queue up in front of a department store in Berlin’s Alexanderplatz shopping district on March 10, 2021, after some shops were allowed to open following a partial easing of lockdown restrictions, amid a coronavirus pandemic. (AFP)

Germany on Thursday recorded a sharp rise in coronavirus infections, as disease control agency chief Robert Wieler warned that a third wave of the pandemic has begun in Europe’s biggest economy.

New infections over the last 24 hours shot up to 14,356, a level not seen since February 4, latest data from disease control agency Robert Koch Institute showed.“In Europe, we should be worried,” Wieler told the journalists’ association ACANU in Geneva on Wednesday.

“If I reflect on Germany, we are at the beginning of the third wave,” said Wieler, underlining the importance for the population to keep to rules like mask wearing or social distancing.

The relaxations came as a relief for a population weary of shutdowns that started in November with the closure of leisure, cultural and sporting facilities. Schools and most shops had followed in mid-December.

But epidemiologists, pointing to more contagious virus variants as well as surging infection rates in Germany’s neighboring countries like the Czech Republic or Poland, have repeatedly warned against easing the partial lockdown too early.

At the same time, Wieler said there are encouraging signs that a vaccination campaign was already starting to show effect.

“We see effects already in those who are over 80. The incidence (rate of infection) is on the decline, tremendously,” he said.

Germany focused on vaccinating the oldest within its population when it began its inoculation campaign late December, but criticism has grown over the pace of the rollout as the country lags Britain or the United States.

Wieler however voiced confidence that there was light at the end of the tunnel.

If “everything doesn’t run completely out of control... we will have control in Germany this autumn. I am absolutely convinced,” he said.