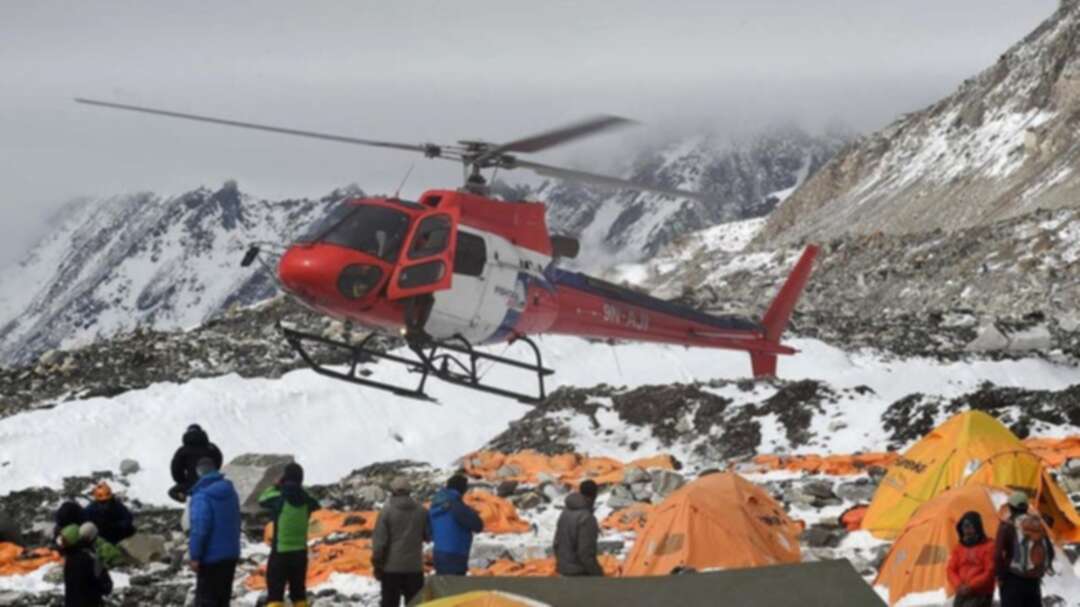 A file photo showing a rescue helicopter preparing to land and airlift injured trekkers from Everest Base Camp on April 26, 2015. (File photo AFP)

The area where the avalanche struck the group, which also included three local guides, is estimated to be about 150 km (93.21 miles) northwest of Nepali capital Kathmandu, according to the officials. The avalanche was triggered by heavy rain and snowfall, they said.

“Four of our Korean clients, who were trekking in the Annapurna region are not in contact and are missing since an avalanche struck them on Friday,” Sandesh Pandey, who runs the tour company which organized the hike, told Reuters.

Mount Annapurna, in northwest Nepal, is the world’s tenth highest mountain at 8,091 meters (26,545 feet) and its base camp

is popular with thousands of trekkers who visit annually.

Four helicopters have been deployed for the search and rescue mission with police and local volunteers also looking for the trekkers, Acharya said, adding, however, that rough weather conditions were making the operation difficult.

The incident comes as the annual trekking season in Nepal, home to eight of the world’s 14 highest mountain peaks including Mount Everest, is drawing to a close.

It could potentially dampen the mood for the Himalayan nation’s tourism industry, yet to recover from a devastating earthquake that killed nearly 9,000 people in 2015 including 18 climbers and their guides at the base camp of Mount Everest.

Cash-strapped Nepal earns 4 percent of GDP through income from tourists.

About 8 percent of the nearly 1.1 million tourists who visited the country in 2019 went hiking or mountain climbing, according to official estimates.

Separately, four rescue helicopters on Saturday evacuated nearly 200 trekkers in the Annapurna region - about 140 of them

foreigners - to safer locations, police said. Their nationalities are not yet known.