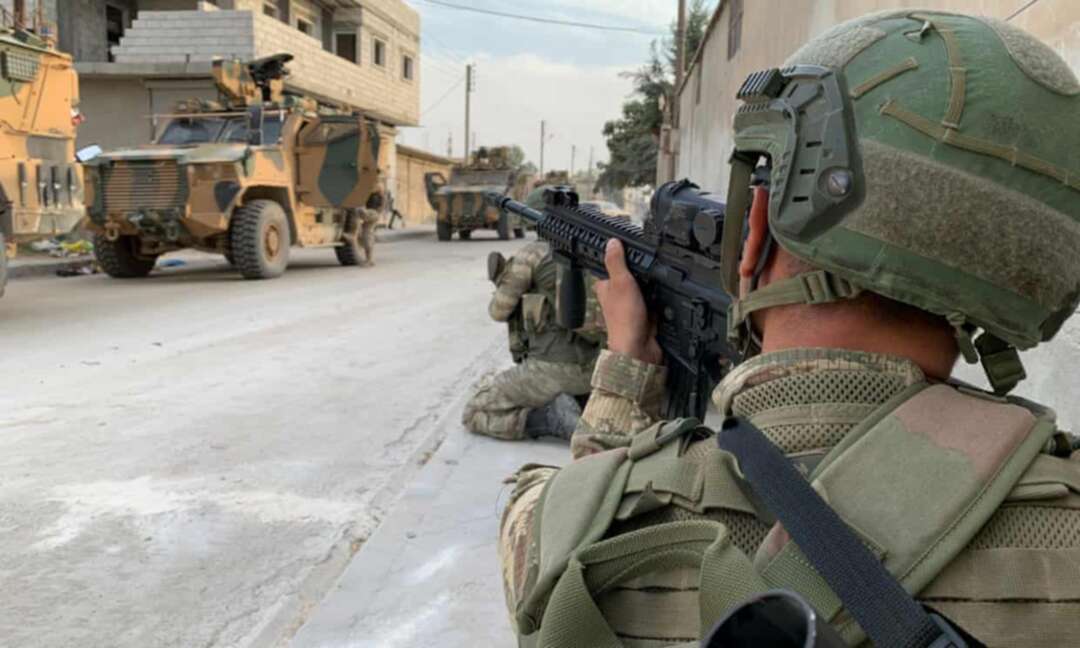 Turkish soldiers in the Syrian border town of Tal Abyad.

Fighting is continuing on the border between Syria and Turkey, according to witnesses, despite an announcement from the US vice-president, Mike Pence, that Ankara had agreed to a five-day ceasefire to allow the US supervision of the withdrawal of Kurdish forces from the area.

Intermittent artillery fire and ground clashes continued in the border town of Ras al-Ayn on Friday morning, one of the two main targets of the nine-day-old Turkish offensive, as the Turkish military and Syrian rebel proxies struggled to wrest control of the town from the Kurdish-led Syrian Democratic Forces (SDF).

Pence and the US secretary of state, Mike Pompeo, met with the Turkish president, Recep Tayyip Erdoğan, in Ankara for hours of talks on Thursday afternoon, announcing afterwards that Turkey had agreed to suspend its operation in north-east Syria for 120 hours to allow the SDF to withdraw, potentially halting the latest bloodshed in Syria’s long war.

However, while the SDF commander, Mazloum Kobane, acknowledged the ceasefire, he said his fighters were ready to abide by it only in the border strip between Ras al-Ayn and Tal Abyad, the other town under Turkish attack.

The Syrian regime and its Russian allies, who have also moved troops into the contested border zone at the invite of the SDF, and are not bound by the terms of the US-Turkish agreement, had no immediate comment.

Turkey launched Operation Peace Storm aimed at clearing the SDF from its border on 9 October, triggered by Donald Trump’s announcement that US troops would withdraw from the region, which effectively removed the buffer that has stopped Turkey attacking the Kurdish-led force.

Ankara maintains the SDF is indistinguishable from Turkey’s outlawed militant Kurdistan Workers’ party (PKK) and has long been angered by US support for the group during the five-year-long campaign to defeat Islamic State.

The offensive has been widely condemned for triggering a humanitarian crisis and risking the re-emergence of Isis amid the chaos. At least 300,000 people have fled their homes in the fighting and at least 71 people have been killed in north-east Syria, according to the UN and a human rights monitor. Over the border in Turkey, 20 civilians have been killed in counterattacks.

The Organisation for the Prohibition of Chemical Weapons said on Friday it was collecting information with regard to possible use of chemical weapons in the fighting.

A statement released by Washington and Ankara following the ceasefire talks did not define any changes to the size and scope of Turkey’s proposed safe zone, which Turkish officials have previously said should be 20 miles (32km) deep and stretch 270 miles from the contested town of Manbij to the Iraqi border.

The statement also reiterated the US understanding of Turkey’s need for a safe zone, which will be “primarily enforced by the Turkish armed forces” after the Kurdish withdrawal, implying that Ankara still intends to occupy the entire area.

Kurdish military leaders and politicians have repeatedly rejected the Turkish plan, which would encompass major Kurdish towns and parts of the main highway.

“Our people did not want this war. We welcome the ceasefire, but we will defend ourselves in the event of any attack … Ceasefire is one thing and surrender is another thing, and we are ready to defend ourselves. We will not accept the occupation of northern Syria,” the Kurdish political leader Saleh Muslim told local television.

Erdoğan is due to meet his Russian counterpart, Vladimir Putin, in Sochi on Tuesday, where it is expected further concrete talks on the size of Turkey’s planned buffer zone will take place.