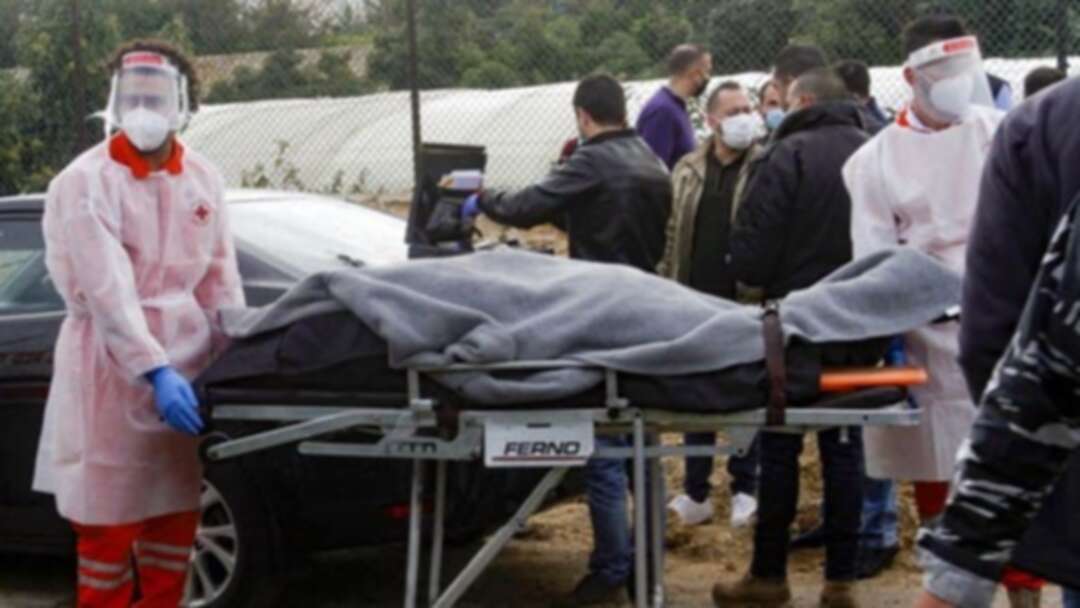 Medics evacuate the body of prominent Lebanese activist and intellectual Lokman Slim from the spot where he was found dead in his car near southern Lebanese city of Saida, on February 4, 2021. (AFP)

The family of prominent Lebanese publisher and vocal critic of the Shia militant Hezbollah group Lokman Slim who was found shot dead in his car on Thursday morning, hinted that the group was behind the killing.

The body of 58-year-old Slim, a longtime Shia political activist and researcher, was slumped over on the passenger seat with multiple wounds from gunshots fired at close range, security and forensic officials said.

He had been missing for hours since late Wednesday and his family posted social media messages looking for him.

To his friends, Slim was a fearless critic of Lebanon's powerful politicians, Hezbollah and its allies Iran and Syria, and a major resource on the history of Lebanon's civil war. His killing raised fears that Lebanon’s political tensions could turn into a new wave of assassinations.

Critics, however, accused Slim of sowing sedition, undermining national unity and being a Zionist because of his criticisms of Hezbollah.

“He was carrying the weight of this country on his shoulder,” his sister Rasha al-Ameer told reporters at their home after the news of the killing broke. She said she has no faith in local investigations and that the family would carry out its own private forensic probe.

“Up until today in the history of Lebanon, all investigations have led to a dead end,” she told reporters. His wife, Monika Borgmann, standing next to al-Ameer, called for an international probe. “This killer has to be punished,” Borgmann said.

Al-Ameer hinted that Hezbollah was behind the killing, without naming the group, adding that it is known who controls the area where her brother was found dead. “Killing for them is a habit," she said. Hezbollah and its allies dominate the area in southern Lebanon.

Hezbollah condemned Slim's killing, calling for a swift investigation. It also urged security agencies to combat crimes it said have spread around Lebanon and which have been “exploited politically and by the media at the expense of security and domestic stability" — a jab at their critics.

Slim was born in Beirut's southern suburbs, a Hezbollah stronghold, where he lived all his life. He returned from abroad to the house, when most people were leaving, during the 2006 war with Israel, when the suburbs were being bombed.

He founded Umam, a research and film production house with a library documenting Lebanon's and Shia history. His family owns a publishing house and Slim hosted public debates and political forums and art shows, including exhibitions documenting the civil war's missing. He and his wife worked on a film documenting the atrocities of Syria's notorious Tadmor prison.

In 2009, he and his wife organized a private viewing at their center for an Oscar-nominated anti-war Israeli cartoon about Israel’s 1982 invasion of Lebanon and the rise of the then-President Bachir Gemayel, in defiance of Hezbollah and Lebanese authorities, which banned it.

“It is a big tragedy,” said Makram Rabah, a close friend and history lecturer. “Anyone who knows Lokman they know who his enemies are.”

Rabah said he and Slim were strong opponents of Hezbollah's grip on power and called for sovereignty and diversity in Lebanon. They were both attacked by a group of young men during a public debate at the height of anti-government protests in 2019. Slim at the time accused Hezbollah supporters of being behind the attack.

Slim also accused Hezbollah supporters days before that attack of threatening him at his home, holding rallies and hanging posters on its walls accusing him of treason.