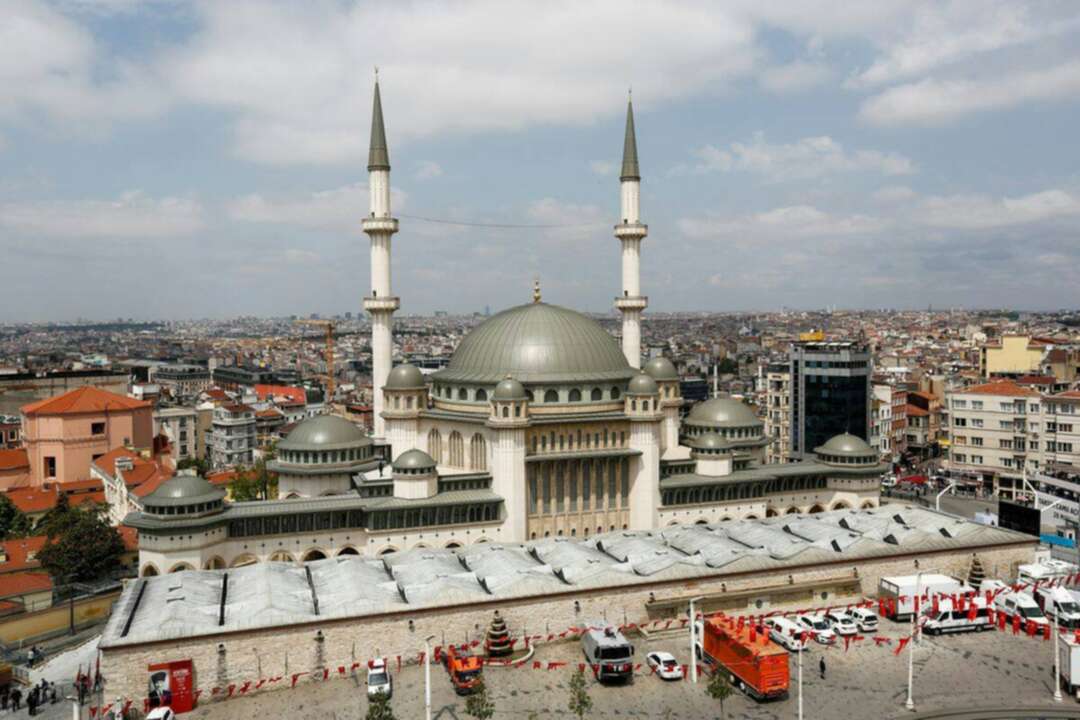 Newly built Taksim Mosque is seen at Taksim Square shortly before its inaguration in central Istanbul, Turkey May 28, 2021. REUTERS/Dilara Senkaya

President Tayyip Erdogan inaugurated an imposing new mosque in Istanbul on Friday, fulfilling a decades-old goal and stamping a religious identity on the landmark Taksim Square in the heart of Turkey's largest city.

The Taksim mosque and its 30-metre high dome loom symbolically over a monument to the foundation of the Turkish republic by Mustafa Kemal Ataturk, whose staunchly secular legacy has been eroded by nearly two decades of Erdogan's rule.

After performing Friday prayers with thousands of worshippers, Erdogan said completion of the mosque marked the culmination of a dream for Turks, and that the call to prayer would be heard there "until the end of time".

Erdogan told crowds outside the mosque that before building work started four years ago there was not even a prayer room at the site. "Worshippers were trying to pray here on top of newspapers, literally like a hen-house," he said.

Construction of the mosque began in February 2017 in a project championed by Erdogan, a devout Muslim, and his Islamist-rooted AK Party, but which was beset for decades by court battles and public debate.

Officials on Friday shared on Twitter a video showing Erdogan in 1994, the year he became Istanbul mayor, pointing from the top of a building towards the area where he said he would build the mosque, the exact spot where it now stands.

It is one of many construction projects with which Erdogan has left his mark on Turkey, including a huge hilltop mosque overlooking the Asian side of Istanbul. Last year he reconverted into a mosque the city's Haghia Sophia, for centuries the world's largest church before being turned into a mosque and museum in turn.

Supporters of the Taksim project argued there were not enough Muslim places of worship close to one of the city’s busiest hubs. Opponents saw it as a bid to impose a religious tone on the square, featuring a cultural centre dedicated to Ataturk which was demolished and is being rebuilt.

The mosque complex, with two towering minarets, will be able to host as many as 4,000 worshippers and includes an exhibition hall, a library, car park and soup kitchen, state-owned Anadolu news agency said.

Pro-government newspapers hailed the new mosque. Aksam's headline mocked critics who fear creeping religiosity: "It looks great. A mosque was built in Taksim and neither has sharia law come, nor has the republic collapsed," it said.

The inauguration also coincides with the date when protests began just 100 metres away in Gezi Park, before growing into massive protests against Erdogan's government which spread across Turkey in June 2013.

The Gezi protests began on May 28, 2013 after demolition work began in one corner of the park the previous evening, knocking down a wall and some trees, drawing a small group of protesters who camped out at the site.

The anniversary of the protests is generally marked on May 31, when the protests escalated. In June of that year, hundreds of thousands of people took to the streets in demonstrations against a plan to build a replica Ottoman barracks on Gezi Park.