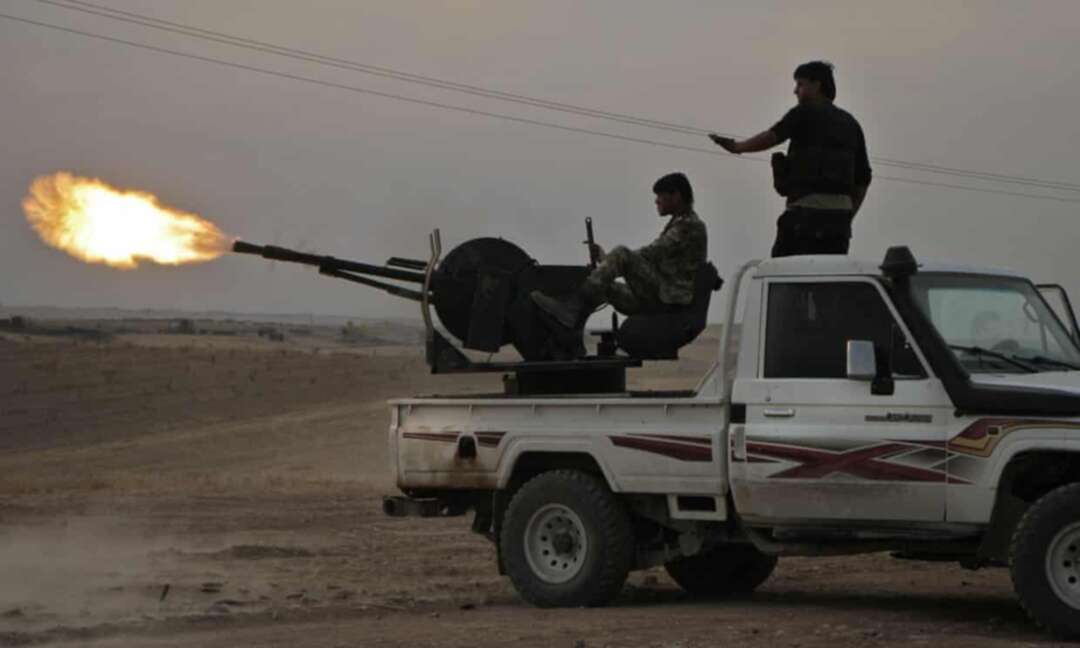 Donald Trump spoke directly to the Turkish president, Recep Tayyip Erdoğan, on Monday to demand an immediate ceasefire in Syria while announcing a series of punishments for Ankara that critics saw as an attempt to save face.

The US president’s conversation with Erdoğan was revealed by the vice-president, Mike Pence, who said he would soon be travelling to the Middle East. “The United States of America did not give a green light for Turkey to invade Syria,” Pence insisted to reporters at the White House.

But Trump’s announcement just over a week ago that he was withdrawing US troops, who had served as an effective buffer against Turkish invasion, has been widely viewed as a historic foreign policy blunder and provoked an extraordinary backlash even from Republicans.

As the situation in northern Syria spiralled out of control, and the White House scrambled to catch up, the president said he had issued an executive order to impose sanctions on current and former Turkish officials and was immediately freezing negotiations on a $100bn US-Turkey trade deal.Trump said he was also reimposing tariffs of 50% on Turkish steel – one of a series of measures taken last year to win the release of the American pastor Andrew Brunson from detention, which triggered a record-breaking 30% slide in the Turkish lira, sending inflation soaring and damaging living standards. In May, Trump scaled tariffs back to 25%.

“I am fully prepared to swiftly destroy Turkey’s economy if Turkish leaders continue down this dangerous and destructive path,” the president said on Monday.

Erdoğan was quoted as dismissing such threats as “quips” on Sunday, while the country’s ambassador to the United Nations in Geneva called a possible European Union arms embargo “a joke.”

The Turkish lira slid 0.8% to its weakest position since May on Monday, but many traders and investors said in effect they would believe it when they see it, especially after US threats earlier this year to sanction Turkey over buying Russian S-400 missile defences failed to materialise.

Trump’s statement also confirmed that all 1,000 US troops in north-eastern Syria are pulling out entirely, although they will “redeploy and remain in the region”. It added that a “small footprint” of US forces are staying in At Tanf Garrison in southern Syria “to continue to disrupt remnants” of the Islamic State.

The Kurdish-led Syrian Democratic Forces were in the forefront of the campaign to defeat Islamic State extremists, but Erdoğan links them to separatist militants within Turkey. The Kurds have turned to a deal with Russian-backed Syrian president Bashar Assad to help fend off Turkey’s invasion, creating a potential tinderbox.

Along with Pence’s upcoming trip, defense secretary Mark Esper said he would next week travel to Brussels to request that Nato allies punish Turkey over the invasion, which he said had “resulted in the release of many dangerous ISIS detainees”.

The White House appears to have shifted to a strategy of claiming that the Turkish invasion was inevitable and it is merely moving US forces out of harm’s way.

On a Monday evening conference call, a senior administration official said: “This was something that was caused by an action of President Erdoğan who, after repeated warnings that this was a bad idea, he shouldn’t do it and the United States in no way endorsed this activity, took a very, very rash ill-calculated action that has had what, for him, were unintended consequences.”

Another official added: “The forces that the

Trump has also maintained his argument that he made a campaign promise to stop endless, faraway wars and bring troops home. Shortly before his statement announcing sanctions, the president tweeted: “Anyone who wants to assist Syria in protecting the Kurds is good with me, whether it is Russia, China, or Napoleon Bonaparte. I hope they all do great, we are 7,000 miles away!”

The new sanctions may not be enough to satisfy Congress, which returns to session on Tuesday. Trump has faced a rare rebellion from congressional Republicans, who have habitually backed him to the hilt, and are currently defending him against an impeachment inquiry.

Mitch McConnell, the Senate majority leader in the Senate, said the pullout of US troops from Syria threatens a “strategic calamity” and “catastrophic outcome” for American interests in the region, although he did not mention Trump by name.

Three top Democratic senators called the sanctions “good and justified” but also insufficient and warned that they would ask Republicans to join them in passing a resolution calling on Trump to reverse the pullout of US forces, viewed as unravelling five years of diplomatic graft.

“President Trump should use this moment to step up, do the right thing, and correct course,” the top Senate Democrat, Chuck Schumer, wrote in a joint statement along with Bob Menendez and Jack Reed, the senior Democrats on the Senate foreign relations and armed services committees.

House Speaker Nancy Pelosi earlier said she was forging ahead on a Turkey sanctions bill with Republican senator Lindsey Graham, who has been fiercely critical of the withdrawal.

Graham said on Monday that he “strongly support” Trump’s executive order sanctions and had joined the president and his team on phone calls with leaders in the conflict. “President Trump gave Turkey the ability to undo the strategic damage they have already caused in a win-win fashion,” he said. “I hope they will accept his outreach.”

Jeremy Hunt, the former UK foreign secretary, said Trump had made a “profound strategic mistake” and that he would be sympathetic to a UK arms sales embargo on Turkey. Unlike a host of other EU countries including France, Germany and Italy, the UK has not yet imposed an arms sale ban.

Trump again warned Turkey it was responsible for the safety of civilians and minorities, and eventually the detention of Islamic State extremists held by Kurdish fighters. “I have been perfectly clear with President Erdoğan: Turkey’s action is precipitating a humanitarian crisis and setting conditions for possible war crimes,” Trump said.