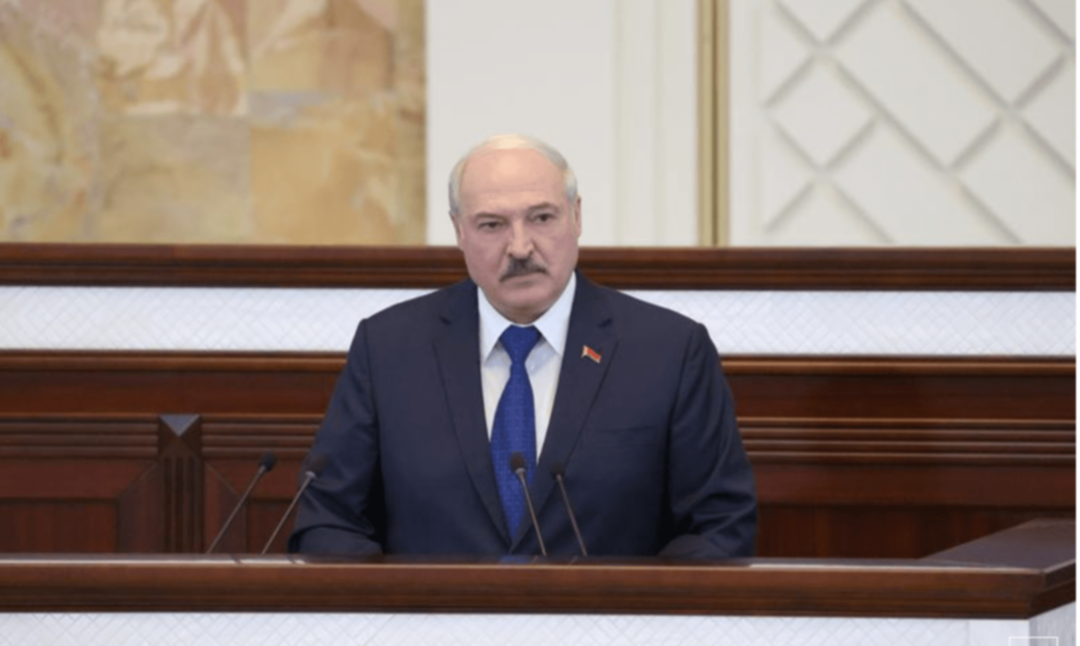 Belarusian President Alexander Lukashenko delivers a speech during a meeting with parliamentarians, members of the Constitutional Commission and representatives of public administration bodies, in Minsk, Belarus May 26, 2021. Maxim Guchek/BelTA/Handout via REUTERS

Belarusian President Alexander Lukashenko said on Wednesday a journalist pulled off a plane that was forced to land in Minsk had been plotting a rebellion, and he accused the West of waging a hybrid war against him.

In his first public remarks since a Belarusian warplane intercepted a Ryanair flight on Sunday between European Union members Greece and Lithuania, he showed no hint of backing down from confrontation with countries that accuse him of air piracy.

"They have crossed many red lines and have abandoned common sense and human morals," he said, referring to a "hybrid war" without giving any details.

Belarus has been subject to EU and U.S. sanctions since Lukashenko cracked down on pro-democracy protests after a disputed election last year. But his decision to intercept an international airliner in Belarusian airspace and arrest a 26-year-old dissident journalist has brought vows of much more serious action.

In his speech to parliament, Lukashenko gave no details of the "bloody rebellion" he accused journalist Roman Protasevich of planning.

Protasevich, whose social media feed from exile had been one of the last remaining independent sources of news about Belarus, was shown on state TV on Monday confessing to organising demonstrations.

But Belarus opposition figures dismissed the confession, seeing the video as evidence Protasevich had been tortured, an allegation repeated by his mother, Natalia.

"I simply plead with all the international community... please, world, stand up and help, I beg you so much because they will kill him," she told Polish broadcaster TVN.

Germany led condemnation of Belarus over the videotapes, which Lukashenko's opponents said were recorded under coercion.

"We condemn in the strongest possible terms the Belarusian rulers' practice of parading their prisoners in public with so-called 'confessions," German government spokesman Steffen Seibert said.

Belarus denies it mistreats detainees. Rights groups have documented what they say are hundreds of cases of abuse and forced confessions since last year.

Europe's aviation regulator issued a bulletin on Wednesday urging all airlines to avoid Belarus airspace for safety reasons, saying the forced diversion of the Ryanair flight had put in question its ability to provide safe skies.

Western governments have told their airlines to re-route flights to avoid Belarus's airspace and have announced plans to ban Belarusian planes. The European Union says other unspecified sanctions are also in the works.

Lukashenko said he would respond harshly to any sanctions. His prime minister said the country could ban some imports and restrict transit in response, without giving details.

Landlocked Belarus is located between its ally Russia and the EU, and some Russian oil and gas flows through it. Last year, it retaliated for sanctions by limiting some oil export traffic through a port in Lithuania.

In his remarks to parliament, Lukashenko, 66, said street protests were no longer possible in Belarus. Most known opposition figures are now in jail or exile.

In power since 1994, Lukashenko faced weeks of mass protests after he was declared the winner of a presidential election that his opponents said was rigged. The protests lost momentum after thousands of arrests in a police crackdown.

"There's nothing more to wait for - we have to stop the terror once and for all," she said.

Western powers are seeking ways to increase the isolation of Lukashenko, who has previously shrugged off Western sanctions, which mostly consisted of placing officials on black lists. The West is wary of upsetting Moscow, which regards Belarus as a strategically important buffer.

U.S. President Joe Biden will discuss the incident with Russian President Vladimir Putin at a summit next month but the White House said it does not believe Moscow played any role in the incident.

Belarusian authorities on Tuesday released a transcript of a conversation between the Ryanair plane and an air traffic controller. In it, the controller tells the pilot of a bomb threat and advises him to land in Minsk. The pilot repeatedly questions the source of the information before agreeing to divert the plane.

The transcript, which Reuters could not independently verify, differed from excerpts released by Belarus state TV, which reported that the pilot had asked to land in Minsk, rather than that the controller advised him to do so.

The Ryanair plane remains in the Lithuanian capital's airport, where it flew after Minsk, while data is collected form it, the Lithuanian prosecutor's office said.

Cummings said It is insane that Johnson became Prime Minister Cummings says that his trip to N.Ireland was disaster for the government's COVID-19 policy