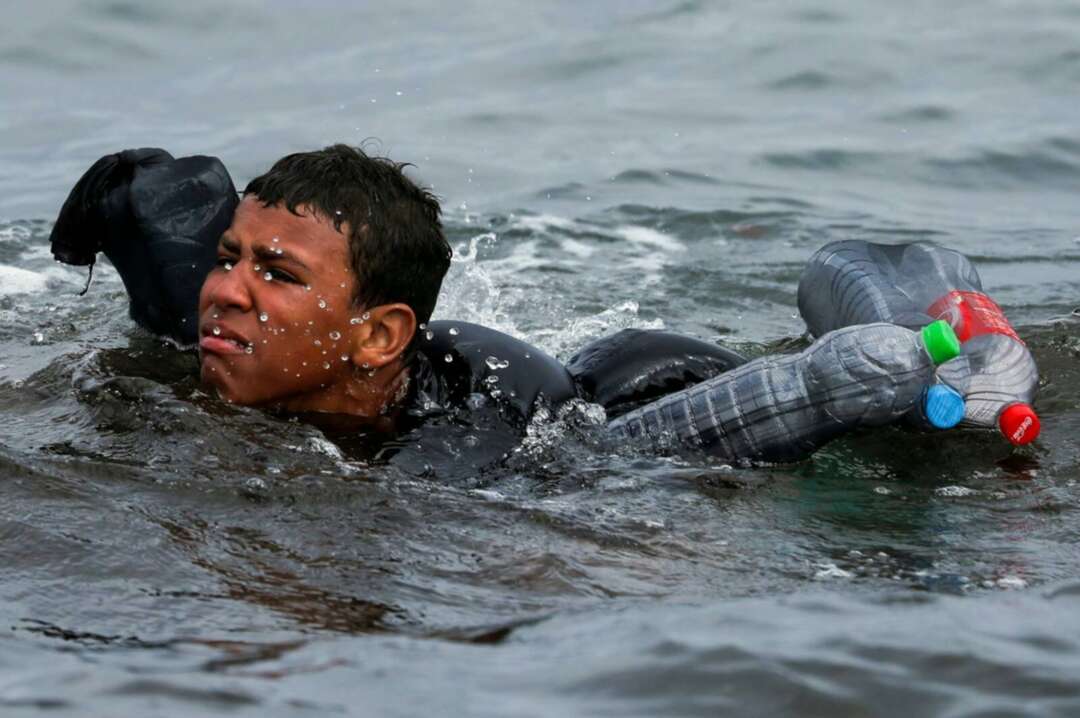 FILE PHOTO: A Moroccan boy swims using bottles as a float, near the fence between the Spanish-Moroccan border, after thousands of migrants swam across the border, in Ceuta, Spain, May 19, 2021. Picture taken May 19, 2021.

Prosecutors in Spain's north African enclave of Ceuta are investigating accusations that Spanish soldiers broke the law by deporting children who had crossed the border from Morocco during a surge in attempted migration last week.

Ceuta's prosecutor for children, Jose Luis Puerta, said on Friday he had opened the inquiry after two non-governmental organisations filed a complaint citing Reuters TV footage of soldiers apparently escorting a young boy, who had swum to Ceuta using empty bottles as floats, back to the border fence.

The boy was one of around 8,000 people who swam into Ceuta or climbed over the fence early last week after Moroccan authorities appeared to loosen controls, prompting Spain to deploy troops and extra police.

"For now, the investigation is focused on this specific case of the Reuters video," Puerta said. The prosecutors' office has requested the full, unedited footage from Reuters as well as video from police cameras on the border fence, Puerta said.

A Reuters spokesperson said: "We have published the full, unedited video, which is now available in the public domain."

Spain's civil guard and national police forces in Ceuta declined to comment on the probe as did the Spanish government's delegation in the enclave, which handles border policy, and the Interior Ministry in Madrid. The Defence Ministry, in charge of the military presence in Ceuta, did not respond to a request for comment.

Footage of the boy, who swam with empty bottles attached to himself and stuffed in his clothes, drew international media attention. On arrival in Ceuta, the boy is seen in the Reuters footage being led away by soldiers towards the security zone between the two countries.

A military command spokesman in Ceuta said he had no information about what happened to the boy.

So-called "express deportations" of adults are permitted between Spain and Morocco under a bilateral agreement, but Spanish authorities are obliged by Spanish law to harbour unaccompanied minors who are not claimed by their parents.

Most of the 8,000 people who crossed the border have been returned to Morocco but hundreds of unaccompanied minors remain, the Ceuta regional government said earlier this week.

Puerta said he had asked Ceuta's military command to identify the soldiers who appear in the video and provide details on what orders were given to troops and police on the ground.

The two NGOs that filed the complaint, Coordinadora de Barrios and Fundacion Raices, did not respond to a request for comment.