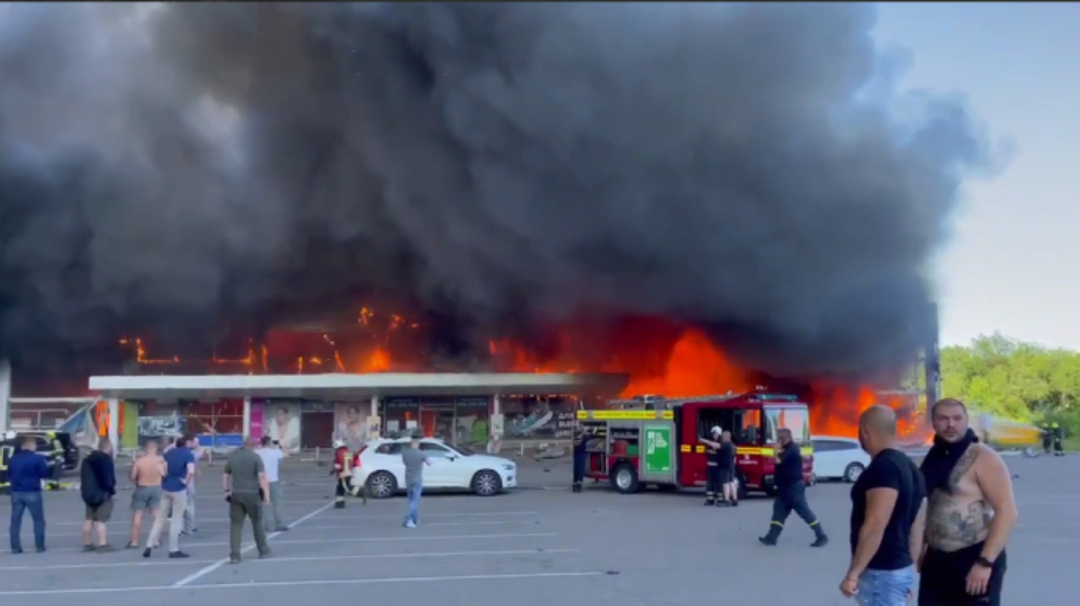 The fire that broke out after Russia bombed the Amstor Shopping Centre in Kremenchuk in the middle of the day on 27 June (screenshot from a video, posted by Ukrainska Pravda)

The death toll from a Russian missile strike on a shopping centre in Ukraine has risen to 18, citing the DPA, the Anews reported.

Dmytro Lunin, the governor of Poltava Oblast, announced the update on Tuesday morning (June 28) on Telegram after rescue and clean-up operations in the city of Kremenchuk continued overnight.

Around 60 people were reported injured in the attack on Monday (June 27). Ukraine's prosecutor's office also said more than 40 people were missing.

Ukrainian President Volodymyr Zelenskyy said in a Telegram post that the number of victims was "unimaginable," citing reports that more than 1,000 civilians were inside at the time of the attack. he also shared a video showing dark plumes of smoke rising from a burning building.

Russians fired missiles at a shopping mall in Kremenchuk More than 1,000 civilians could have been at the time in the Amstor shopping mall. "The number of victims is hard to imagine," said President Zelenskyy. There were no military objects nearby. For now, the firefighters found 3 dead and 40 injured civilians in the mall. 115 rescuers and 20 units of equipment are working at the scene, the fire spread over 10,300 m². Update: As of 19:30, there are 10 dead and more than 40 injured in the Russian attack on Kremenchuk's shopping mall, Poltava Oblast Head Dmytro Lunin reported. Ukraine's Air Force Command reported that Russians hit the shopping and entertainment center in Kremenchuk using X-22 missiles fired from Tu-22 M3 long-range bombers flying over Russia's Kursk Oblast, the planes took off from Shaykovka airfield (Kaluga Oblast).

Zelenskyy stressed that the target presented "no threat to the Russian army" and had "no strategic value." He accused of Russia of sabotaging "people's attempts to live a normal life, which make the occupiers so angry."

Zelenskyy said: "Russia continues to take out its impotence on ordinary civilians. It is useless to hope for decency and humanity on its part."

Local authorities said that the fire was extinguished on Monday evening.

It should be noted that Ukraine blamed Russia for the attack, saying that X-22 air-to-surface missiles fired from Tu-22 long-range bombers had been used.