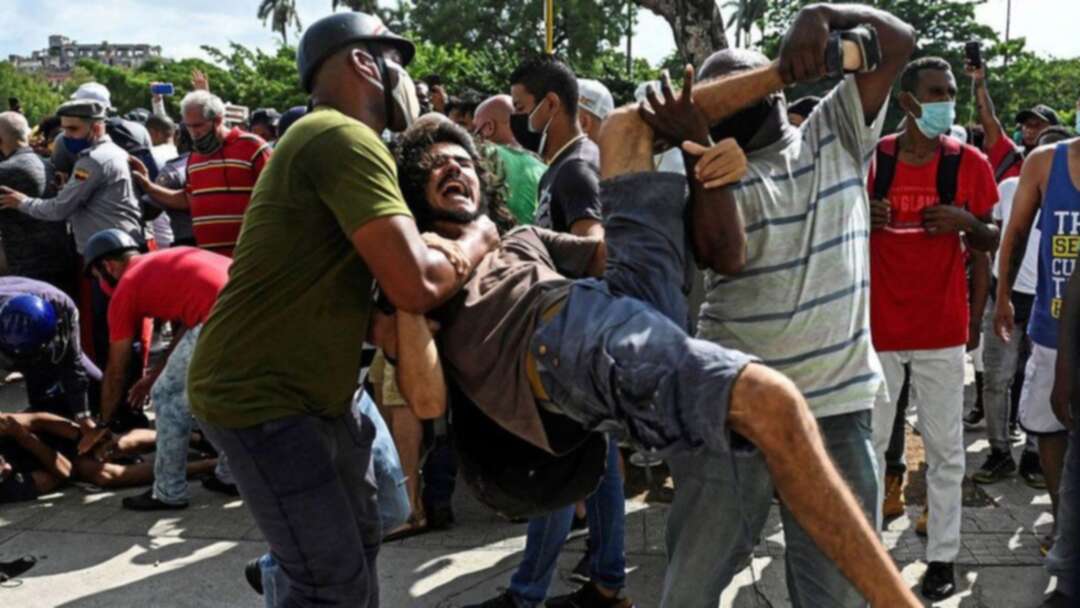 The BBC reported that media and opposition sources say dozens of people have been arrested in Cuba after thousands joined the biggest protests for decades against the island's Communist government.

Cubans have been angered by the collapse of the economy, food and medicine shortages, price hikes and the government's handling of Covid-19.

The protests are significant as critics face harsh punishment for dissent.

However, the island's president called for his supporters to "fight" the protesters.

The BBC Mundo reported that one of those at Sunday's protests, named only as Alejandro said "There is no food, no medicine, there is no freedom. They do not let us live."

Protesters shouted "freedom" and "down with the dictatorship" in demonstrations across Cuba, including the capital Havana.

According to the BBC, unnamed protester in San Antonio told the news agency that "We are not afraid. We want change, we do not want any more dictatorship."

The BBC reported, citing Reuters as saying that anti-government protesters were arrested by security forces who were assisted by plain clothes officers. Images on social media showed what appeared to be security forces detaining, beating and pepper-spraying some of the protesters.

There were reports of internet blackouts across the island and a photographer with Associated Press was injured after a confrontation with security forces.

In response to the rare unrest, President Miguel Díaz-Canel addressed the nation in a TV broadcast and blamed the US for the turmoil. He called its tight sanctions on Cuba - which have been in place in various forms since 1962 - a "policy of economic suffocation".

Mr Díaz-Canel said the protesters were mercenaries hired by the US to destabilise the country, and called for his supporters to go out and defend the revolution - referring to the 1959 uprising which ushered in Communist rule.

He announced "the order to fight has been given - into the street, revolutionaries!"

The top US diplomat for Latin America, Julie Chung, tweeted: "We are deeply concerned by 'calls to combat' in Cuba."

The US - which has a decades-old history of hostilities with Cuba - has said it stands with Cubans, and called on those in government to refrain from violence and listen to its people.

"The Cuban people are bravely asserting fundamental and universal rights," US President Joe Biden said in a statement.

But Venezuelan President Nicolás Maduro pledged "all support" to the Cuban president and the island's "revolutionary government". Mr Maduro's government is a close ally of Cuba's.

And Mexico and Russia both said no other country should interfere in Cuba's internal affairs.