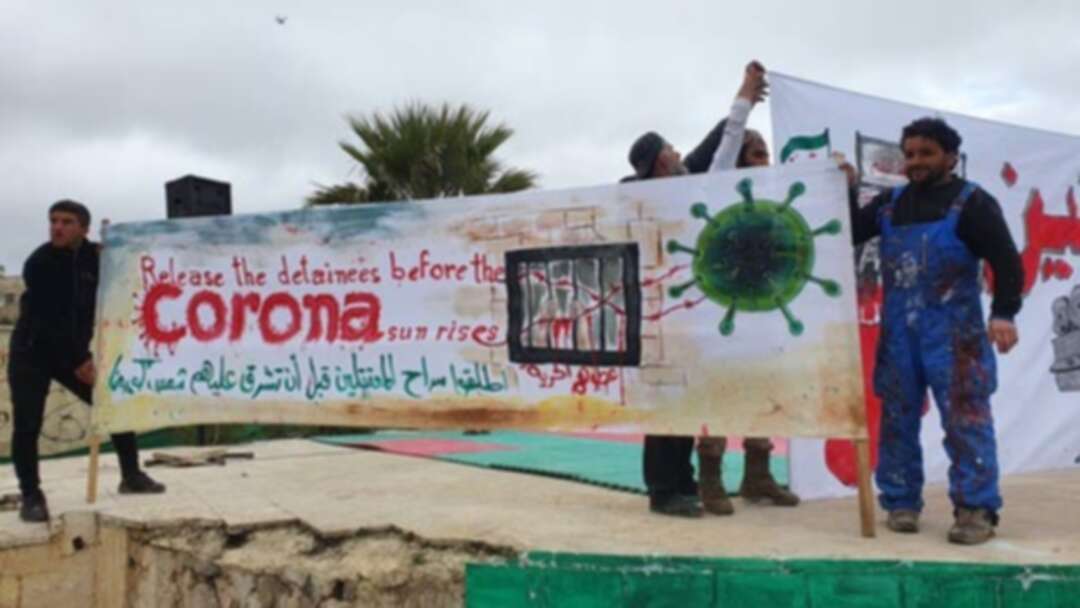 The Syrian artist Aziz Asmar helds up a painted banner asking for the release of detainees in Syria amid the threat of coronavirus. (Mohammed Jamalo)

As fears grow of an impending coronavirus outbreak in Syria, an artist in the war-torn city of Idlib is painting murals to raise public awareness about the virus – and to remind the world of the Syrian regime’s ongoing attacks against civilians. Syrian artist paints

Just weeks ago, opposition-held towns in Idlib province in northern Syria were bombed heavily by the Syrian regime, backed by Russian aircraft. The military campaign lasted over three months and displaced 1.2 million people, most of them civilians.

Now, as Idlib’s citizens emerge from the rubble to face an outbreak of the deadly coronavirus, Syrian artist Aziz Asmar is working to help keep people safe. 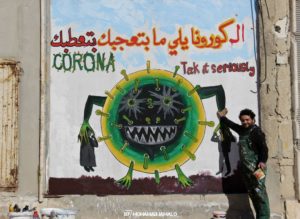 “We’re reminding people to stay at home, not to gather in groups, and to wash their hands more often,” explained Asmar, 48, who lives in Binnish, a northern district of Idlib.

A mural he painted outside a popular market reveals a cartoon of a vicious-looking green and yellow virus. Next to it, a message in Arabic reads: “Syria isn’t safe.”

“I started as the virus was breaking out in Europe and the Middle East. Every time a new country locked down, I painted a mural,” said Asmar. 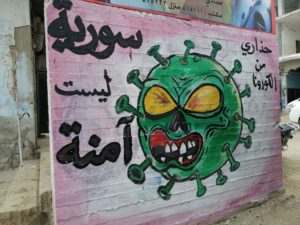 An immense challenge for the embattled province

Idlib is preparing for an outbreak, although there are currently no confirmed cases in the province. “In Binnish, schools have shut and tomorrow’s market has been canceled,” said Asmar.

But the province of 3.5 million people faces tremendous challenges. Medical supplies are severely limited, and over 70 hospitals have been targeted by government-backed offensives since April 2019.

According to the Idlib Health Directorate, there are 30 adult ventilators and 105 Intensive Care Unit (ICU) beds available to treat severe cases, 95 percent of which are currently in use for other treatments. Its director Dr. Munzer al-Khalil told Al Arabiya English that he estimates that 110,000 hospital beds, including 2,000 ICU beds, will be required during the pandemic.

Extreme poverty and displacement from the ongoing conflict are weakening the measures taken to contain the virus’ spread. “Our awareness campaigns are not working. People view the coronavirus as one of many serious threats, including bombs and chemical weapons. They have lost hope,” said al-Khalil.

“We asked people to wash their hands and they told us they don’t have clean water to drink,” he added.

Asmar agreed: “Some people have laughed at my murals. They say recent bombings in Idlib are deadlier than the virus.”

But he is certain his work is making an impact. “Slowly with the paintings, people are beginning to understand the risks of the virus,” he said. 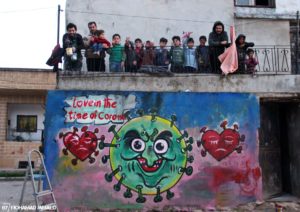 Syrian artist Aziz Asmar with children in Idlib above one of his coronavirus murals. (Mohamad Jamal)

Painting hope in the city, and messages to the world

Asmar teaches art to schoolchildren and believes the murals can give people hope in the war-torn city. “When I work on my murals people often come and watch, and children take part in the painting,” he said, “They see a shelled building being revived, and it reminds them of what home used to be.”

But Asmar’s messages are also political, and he is adamant that Syrian government attacks on civilians shouldn’t be forgotten in the outbreak.

Last week, the UN called for a ceasefire in Syria to help prevent the spread of COVID-19. The UAE offered to help Syria battle the pandemic during a phone call to President Bashar al-Assad, and some Western politicians have called for a lifting of sanctions on Syrian officials.

This time, the green corona cell appears in front of a Syrian flag, with a bomb painted on each side, and the following message in English: “The Al-Assad Corona is more dangerous to the world.” levant 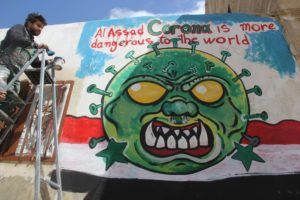