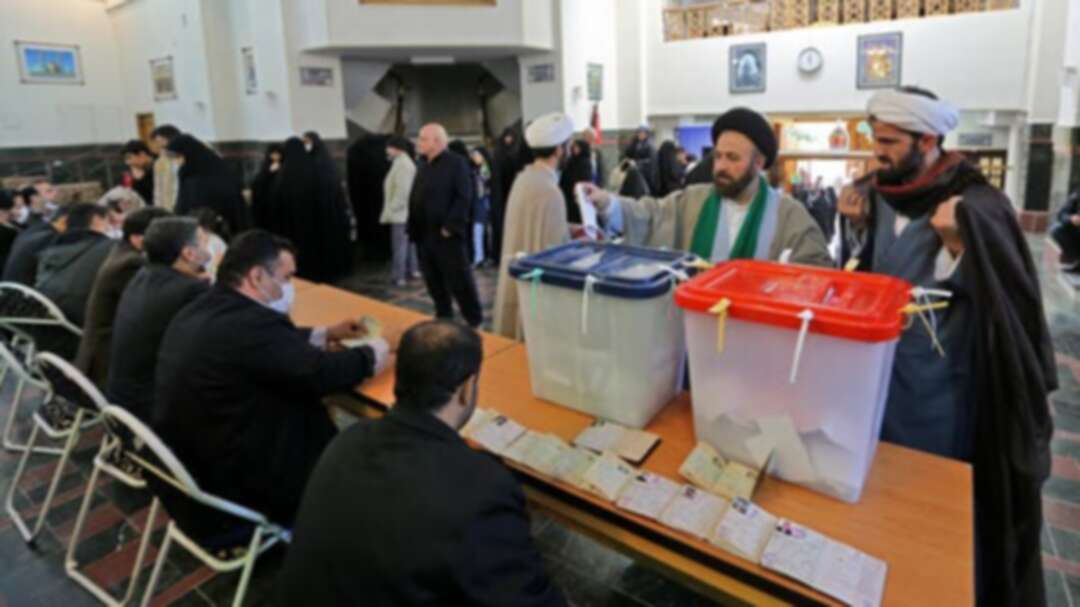 Iranian election officials wear masks as they wait for voters during parliamentary elections at the Shah Abdul Azim shrine on the southern outskirts of Tehran on February 21, 2020. (Reuters)

Lawmaker Bahram Parsaei said Iran’s ministry of interior rejected a proposal to postpone the parliamentary election in the early days of the coronavirus outbreak in the country. ministry

The Islamic Republic officially announced the spread of coronavirus to the country on February 19 by reporting two deaths due to the virus in the Shia holy city of Qom.

The country held its eleventh parliamentary election two days later on February 21, which registered the lowest turnout in the history of the Islamic Republic.

“We were asked to postpone the election because of coronavirus, or at least postpone it in Qom, but we resisted and did not accept these proposals,” Interior Minister Abdolreza Rahmani Fazli said in a meeting the day after the election, according to a member of parliament Parsaei.

Parsaei criticized the government’s handling of the coronavirus crisis, saying that Qom, the epicenter of the outbreak, should have been quarantined to avoid the spread of the virus to the rest of the country.

The Iranian regime has been accused of mishandling its response to the coronavirus outbreak in the country, including deliberately covering up details of the outbreak to maximize turnout in parliamentary elections.

Documents obtained by an Iranian exile-run news site show that a senior Iranian official instructed authorities to only implement public health measures after the elections on February 21. In contrast, the regime has insisted it acted as soon as it became aware of the problem.

According to the Associated Press, the days in which the regime denied the presence of the virus allowed it to spread, as the regime prioritized the legitimacy it sought from elections over public health. ministry

“The medical staff today pay the biggest price in the fight against coronavirus,” Parsaei told the semi-official ILNA news agency on Friday.

The number of doctors and nurses who have died of coronavirus in Iran is “high,” he said.

“This figure is smaller compared with other countries that had an outbreak at the same time or before Iran,” he said.

Parsaei also criticized authorities for expelling a team of doctors from international humanitarian group Medecins Sans Frontieres (Doctors Without Borders) who came to the country on March 23 to treat coronavirus patients in Isfahan, one of the country’s worst-hit provinces.

He called the decision to expel the MSF team “very questionable,” adding: “This behavior was not in line with Iranian customs and culture. MSF is active all over the world and is not affiliated with any institution.” ministry

As of Friday, 2,517 in Iran have died from coronavirus, and there are 53,183 confirmed cases. levant