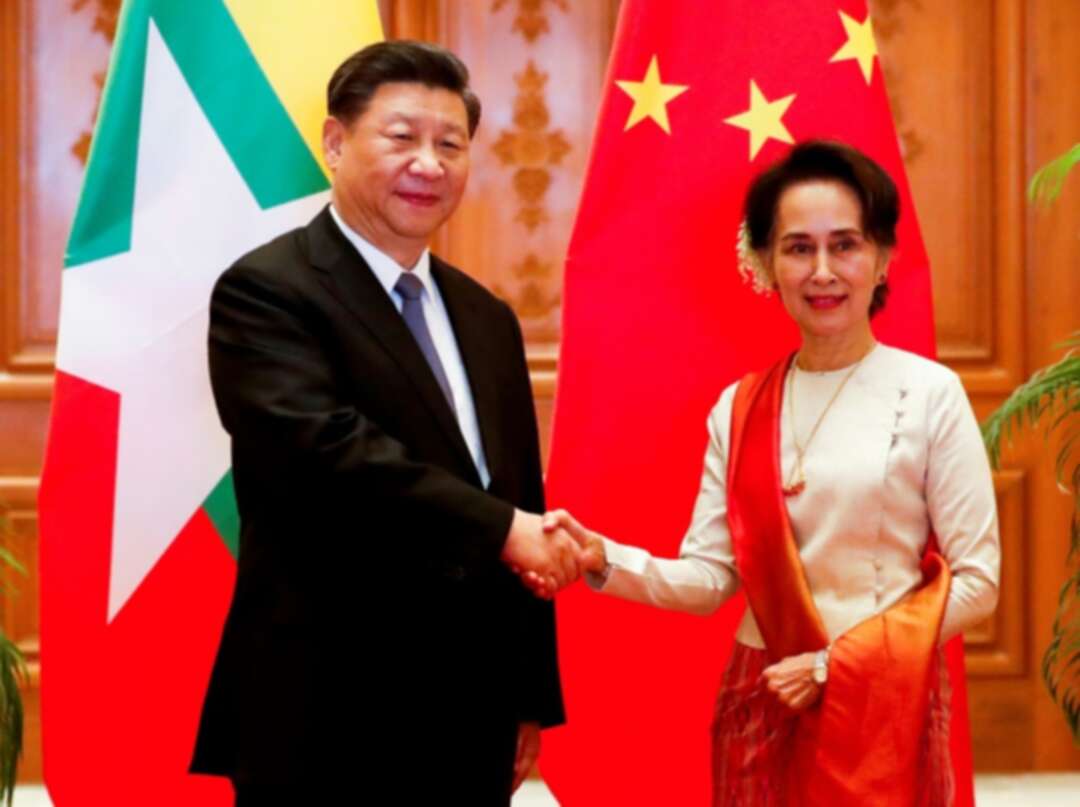 China's Xi Jinping doubled down on his support for fallen rights icon Aung San Suu Kyi on Saturday, signing dozens of infrastructure and trade deals and meeting with the Myanmar army chief accused of overseeing a genocide against Rohingya Muslims.

The Chinese president's state visit to Myanmar's purpose-built capital came as Western investors give a wide berth to the country due to the Rohingya crisis.

A 2017 military crackdown on the minority, which UN investigators called genocide, forced around 740,000 people from western Rakhine state over the border into Bangladesh.

Beijing has stood by the increasingly isolated nation and reaffirmed its position in a joint statement in Chinese state media as Xi's plane left the capital after two days, escorted by fighter jets.

China "firmly supports Myanmar's efforts to safeguard its legitimate rights and interests and national dignity in the international arena" and for it to advance "peace, stability, and development in Rakhine State".

The Asian giant is now Myanmar's largest investor even as distrust of its ambitions lingers among the public.

More than 30 agreements were signed Saturday on Xi's final day of his visit -- with Suu Kyi and Xi seated across from each other on long tables alongside related ministers.

Details were scant but among the 33 deals was a concession and shareholders agreement on the $1.3 billion Kyaukhphyu deep-sea port and economic zone, located in a part of Rakhine state left largely unscathed by the 2017 violence.

There was also a letter of intent for "new urban development" in Myanmar's biggest city Yangon and feasibility studies for rail links.

The aim is to carve out a so-called "China-Myanmar Economic Corridor" -- a path of infrastructure from China's landlocked south to Myanmar's western Rakhine state which would serve as Beijing's long-awaited gateway to the Indian Ocean.

The signing ceremony came between sit-down meetings with Suu Kyi and powerful army chief Min Aung Hlaing, who was put under sanctions by the US after being accused of masterminding the Rohingya crackdown.

Myanmar says it was defending itself against attacks by militants.

After his arrival, Friday Xi called the visit a "historic moment" for China-Myanmar relations, according to the state-run newspaper the Global New Light of Myanmar.

He also touched on the "unfairness and inequality in international relations" in what could be seen as a slight against the United States.

Myanmar leader Suu Kyi -- whose reputation lies in tatters in the West's eyes due to her defense of the army over the Rohingya crisis -- said the country would always be at China's side.

"A neighboring country has no other choice, but to stand together till the end of the world," she said during a celebration late Friday.

China remains an indispensable ally for its Southeast Asian neighbor, wielding a protective veto vote at the UN Security Council.

The stakes are heightening as the UN's top court prepares to rule next week on whether "emergency measures" should be taken against Myanmar as part of a genocide complaint in The Hague.

But widespread suspicion of Beijing's influence in the country persists among those who are skeptical the economic benefits will trickle down to the masses and of ties to rebel groups fighting the state in border areas.

"They believe that China has been taking advantage," said Thu Wai, leader of the Democratic Party, one of the 17 political parties who came to Naypyidaw as part of the visit.

The lack of transparency surrounding the 33 deals signed Saturday will lead to a "backlash" as mistrust grows, said political analyst Khin Zaw Win.

That anger was on display in Yangon, where dozens of protesters rallied against any reinstatement of a controversial Chinese-backed mega-dam.

They held signs calling for "termination" of the $3.6 billion Myitsone projects, which was not mentioned in the signed deals.

"The Chinese president comes with his interest in Myanmar -- but it is not for our sake," said organizer Aung Soe.

The 6,000-megawatt dam project was suspended in 2011 in the face of nationwide condemnation.

It is believed to have been a personal affront to Xi, who signed the deal with Myanmar's then-military junta as vice president in 2009.