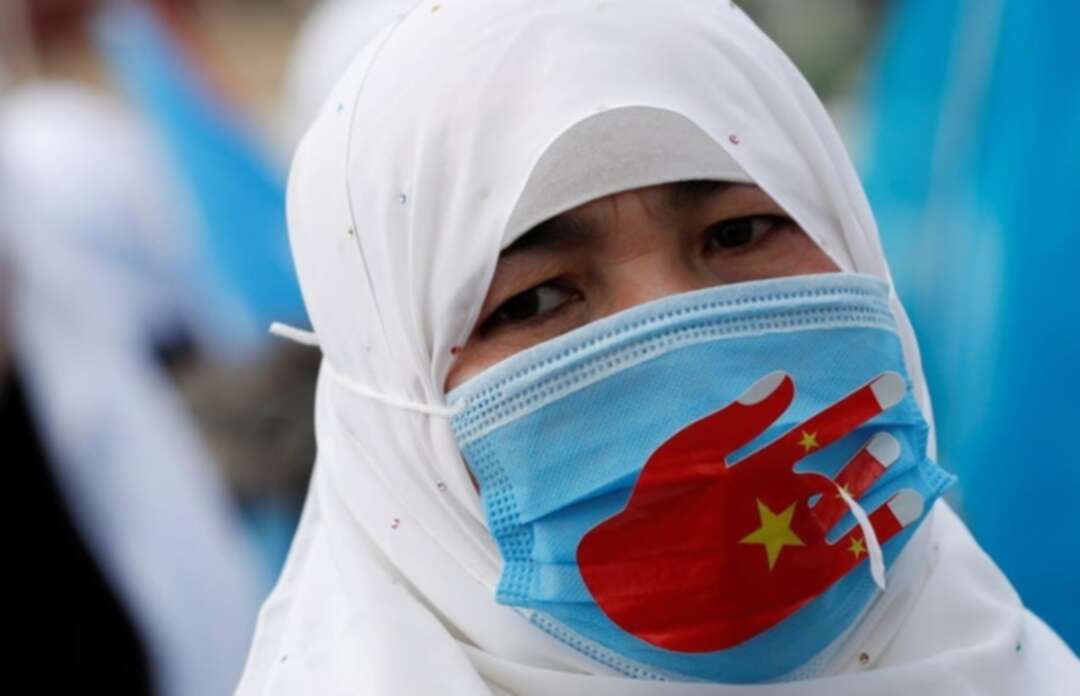 An Ethnic Uighur demonstrator wearing a protective face mask to prevent the spread of the coronavirus disease (COVID-19), takes part in a gathering on the occasion of International Women's Day to protest China's treatment of Uighurs, in Istanbul, Turkey March 8, 2021. (File photo: Reuters)

Beijing accused the EU of “hypocrisy” on Wednesday after the two sides summoned each other’s envoys in an escalating row over the treatment of China’s Muslim Uighurs.

France, Germany and other EU nations called in Chinese ambassadors to protest against sanctions imposed by Beijing targeting their citizens, including five members of the European Parliament as well as two EU bodies and two think-tanks.

The sanctions were a tit-for-tat response after the EU, Britain and Canada blacklisted four former and current officials in China’s Xinjiang region.

China called in the EU and British envoys in Beijing over the coordinated move.

Rights groups say at least one million Uighurs and other mostly Muslim minorities have been incarcerated in camps in Xinjiang, where authorities are also accused of forcibly sterilizing women and imposing forced labor.

China has strongly denied the allegations, saying training programs, work schemes and better education have helped stamp out extremism in the northwest region and raise income.

“The EU only allows itself to arbitrarily smear and attack others, and even arbitrarily imposes sanctions based on false information and lies, but does not allow the Chinese to talk back or fight back,” said foreign ministry spokeswoman Hua Chunying.

“This in itself is double standards, a manifestation of bullying and hypocrisy.”

Washington, which had already imposed sanctions on two of the Chinese officials in July 2020, extended them to two others.

It is leading a drive to form a united front against China on issues from rights abuses in Xinjiang and Hong Kong to Beijing’s claims over the South China Sea.

China had until recently enjoyed relatively cordial relations with the EU, which has been muted over alleged rights abuses as it hunts a trade pact with the world’s second largest economy.

The tensions come as the EU seeks to formulate a strategy on China at a time when tensions between Beijing and Washington are emerging as the world’s number one geopolitical issue.

Hua said China did “not accept the unreasonable practice of some European countries in summoning Chinese ambassadors.”

Coupons, cash and free doughnuts: Global perks for getting the COVID-19 vaccine China plans to invite Palestinians and Israelis for talks: FM