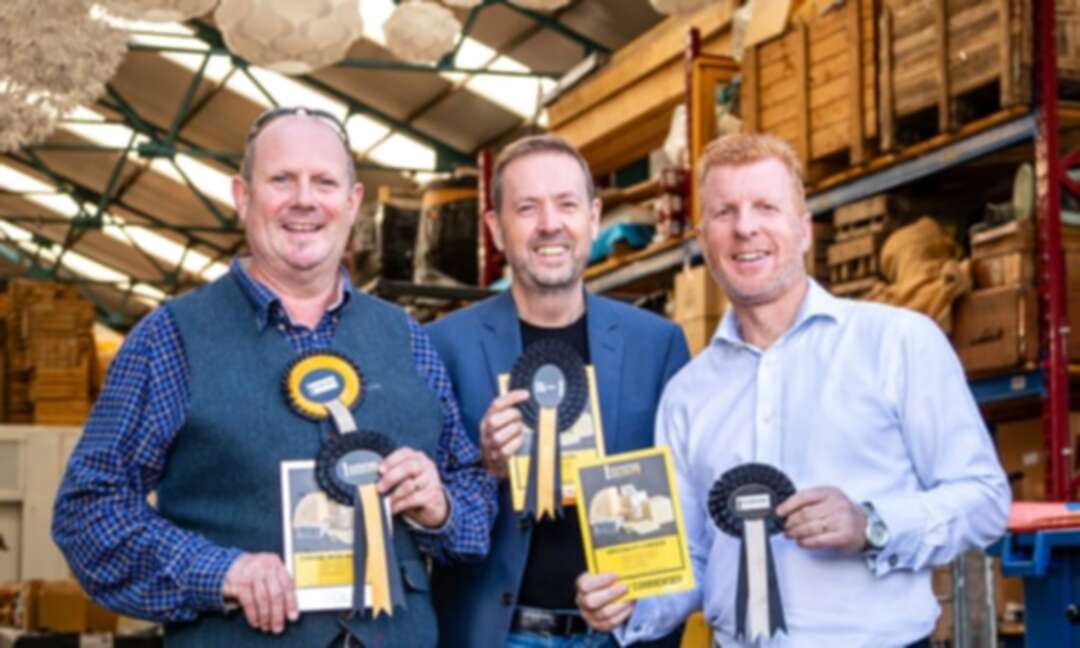 Simon Spurrell (centre) said the loss in sales came after discovering he needed to provide a £180 health certificate on retail orders to consumers in the EU.

A commercial cheesemaker in Cheshire has been left with a £250,000 Brexit hole in his business as a direct result of the UK’s departure from the EU on 1 January.

Simon Spurrell said he has lost 20% of his sales overnight after discovering he needed to provide a £180 health certificate on retail orders to consumers in the EU, including those buying personal gift packs of his award-winning wax-wrapped cheese worth £25 or £30.

He says he had hoped to take part in the “sunny uplands” promised by the government post-Brexit but has instead seen the viability of his online retail come to a “dead stop”.

“Our business had high hopes of continued growth in the EU market, after seeing the avoidance of the no-deal and announcement of a free trade deal.

To save his business he will now have to switch a £1m investment he was planning to make in a new distribution centre in Macclesfield to the EU, with the loss of 20 jobs and tax revenue to the UK.

“It is a real shame because that means I’m now going to invest in France, provide French employment, and then contribute to the EU tax system, which was pretty much going against the whole reason that we were meant to be leaving.”

As small businesses up and down the country come to terms with the new and complex export red tape, Spurrell explained that he thought he was fully prepared for Brexit and had consulted with the Department for Environment, Food and Rural Affairs (Defra) and the National Farmers’ Union along the way.

He knew he would need customs declarations and health certificates signed off by vets to get his cheese into the EU after 1 January, and has successfully been getting pallets of the product across the Channel to wholesale customers.

But what he had not anticipated was the requirement for health certificates to accompany online orders from private customers.

“It’s as if someone forgot to negotiate this part of the deal, they forgot that there needed to be an exemption or allowance for the direct consumer sales.

“We ship to the USA, Canada, Norway, etc, all non-EU countries; we have never had a problem with at all. It is an oversight in the agreement that does not affect EU producers at all, but is a dead stop for all UK producers selling into the EU via online sales,” he added.

In an indication that neither the EU or the UK had time to translate the trade deal into practical guidance for business, Defra said it was continuing to “engage with the European commission and the EU member states to ensure that we share a common understanding of the EU’s export rules and how they should apply”.

Defra said it had worked hard to ensure UK businesses were not disadvantaged by the deal and that the farming and food minister Victoria Prentis would now be in contact with Spurrell and Defra officials to discuss further.

It also revealed that the number of vets or food-competent certifying officers now trained to issue the European health certificates had risen “from 600 to 1,500 and this number continues to grow”.

Sabine Weyand, the director general of trade at the European commission and Michel Barnier’s former deputy in the withdrawal agreement negotiations, posted a tweet in English saying “help us to help you”, with a link to a page on the EU’s Access2Markets website explaining “how to report a trade barrier”.

Spurrell’s Cheshire cheese company in Macclesfield and Hartington Creamery in Derbyshire turn over more than £4.3m a year and employ 25 people, and he planned to double staff numbers with a new fulfilment centre in March.

“I would be looking to employ another 20 people on top of the 25 we have now,” he said. “So, a substantial investment which we now have to review. I am still shell shocked by what has happened.”

Spurrell said he voted remain but had come to accept Brexit. “I am a positive person and always make the best of a bad situation and we thought, ‘Right, well let’s get used to this, let’s go with it. Let’s take on Europe from the UK,’ and that’s what we tried to do until 4 January when it was just every parcel was coming back,” he said.

His experience is being repeated right across the country with courier companies refusing to take small packages of animal or food originated products.

John Arbon Textiles in Devon was told by its courier company that its knitting wool, spun from local sheep fibres, would no longer be accepted with hauliers now trying to mitigate the risk of one package in their van or lorry causing their entire load to be delayed because they are missing a health certificate.

A government spokesperson said “there is extensive advice available to support businesses as they adjust to the new arrangements” and it was “vital” that traders ensured they had the correct paperwork for exports.