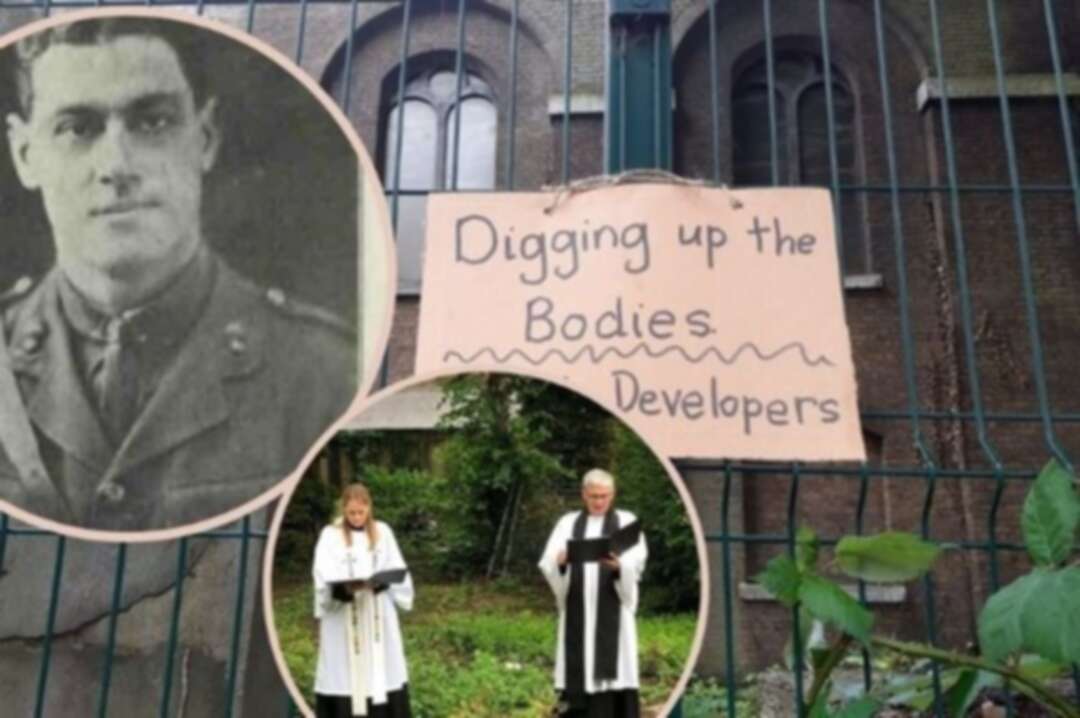 Graves are being exhumed at St Lawrence's Church

According to MyLondon, neighbours in Brentford are furious the bones of buried war heroes they say should be left to rest are being dug up to make way for a housing development. war heroes

The centre of Brentford is currently buzzing with building work, penned in by hoardings and overshadowed by cranes. It's all part of a huge transformation of the town centre known as the Brentford Project led by developers Ballymore.

But in a leafy corner of Brentford High Street, the beautiful listed building of St Lawrence's Church is currently having its churchyard dug up.

MyLondon reported that Campaign group Brentford Voice which is working to protect the town's heritage said that it understands some 850 graves are to be exhumed and re-interred in a cemetery in Woking.

The graves include two Commonwealth war graves of First World War heroes, numerous victims of the 1642 Civil War Battle of Brentford and many workers who came to Brentford from the Black Country to help build the Grand Union Canal in the 19th century.

Many are furious such history is being disturbed and the group's representative Jim Storrar said people are fuming they weren't given a chance to pay their respects. war heroes

Mylondon reported, citing Storrar as saying "It's the oldest building in Brentford and it's a massive part of our heritage. We were given absolutely no notification. It's really outrageous."

"There's been numerous letters and comments from the local community, we're really proud of our heritage and it's caused a big stink."

No-one knows what happened to the headstones, but it's well known a local soldier named Gunner Albert Ellen and another First World War hero, Lieutenant Merrick Prismall are buried there.

Jim says people are pleased Ballymore has agreed to protect the church and use it for a community space and keep part of the church yard as a garden, but he says people want a proper memorial for the dead.

Asked if other parts of Brentford's heritage are being protected amid the massive development, he says: "There's really not much of it left now, so much of it has disappeared but I think there is a commitment to protect what is left.

"Brentford has been a building site for years and the high street had become very run down. It desperately needed redeveloping but Ballymore have been particularly poor at engaging with the local community."

Historic pubs like the Magpie and Crown just down the road from the church have been left standing where old terraces have been knocked down but they look like remnants of a different age at the moment, stuck in between the developer's hoardings.

When MyLondon visited the site, no one was around and it was impossible to get behind the construction hoardings to view the exhumations.

But two women at the cafe across the road who did not wish to be named said they thought digging up the graves was wrong.

"The church should be protected, there's no way the graves should dug up," said one.

"They should leave them in peace to haunt the churchyard. They ought to keep it as it's a listed building and maybe turn it into a library."

Asked if enough is being done to protect Brentford's heritage, she said: "They do make some efforts to protect it but only when people make an issue of it. They protected the pub down the road when a whole 1970s terrace was knocked down and they've done some things around the canal, but it's not enough. There's just so many flats going up."

It's going to be seven years more until the Brentford Project is complete. Jim and his neighbours hope something of the old Brentford will remain once the hoardings come down.

Ballymore issued a statement saying: "We have undertaken a significant notification process ahead of beginning these works. The exhumations are necessary to bring forward the approved planning permission, the legislation stipulates that all bodies within the new graveyard are to be moved as part of the process.

"Those families who have come forward and requested their ancestors are reburied elsewhere are being accommodated. All remaining bodies will be moved and re-interred at Brookwood Cemetery in Surrey.

"As part of the wider transformation of Brentford’s town centre and high street, the de-consecrated St Lawrence’s Church will be sensitively restored, with plans for it to become a community hub and space to host pop-ups, events and shows. The gardens of the church will also be reimagined as a new landscaped space for residents and locals."

Commonwealth War Graves Commission added: "Since 2014 we have been in discussions with stakeholders about the redevelopment of land at St Lawrence Church, Brentford.

"Among those buried there are two war graves under our care, those of Gunner Albert Ellen and Lt Merrick Prismall.

"Since the 1960s we have been unable to commemorate both these men at their grave sites, and after careful consideration we have agreed for their graves to be moved to a more suitable site.

"Our policy on exhumations remains that it should only be undertaken as a last resort, which was the case here.

"We will continue to uphold our responsibility of commemorating these two men, who will be buried at Brookwood Cemetery, adjoining the largest CWGC cemetery in the UK." war heroes