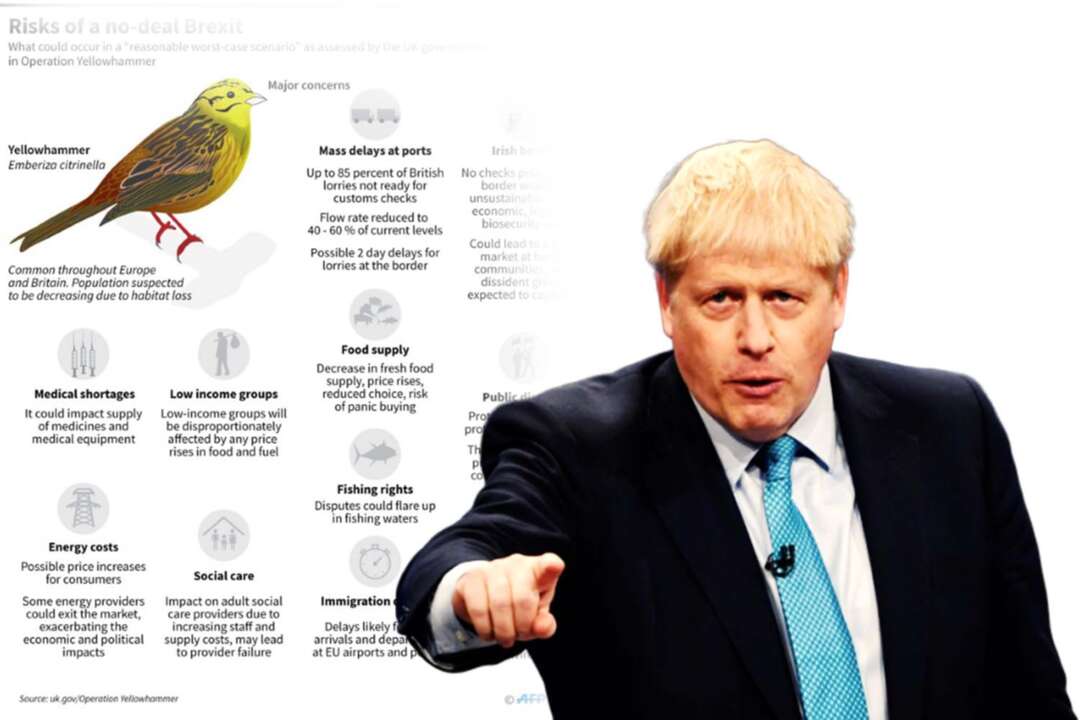 Britain and the EU on Thursday traded claims about who would be responsible for the failure of a new Brexit deal unveiled by London as the country faces a messy exit from the bloc at the end of October.

British Prime Minister Boris Johnson warned the bloc's failure to listen to his new proposal would result in it sharing the blame for a likely chaotic divorce.

Johnson has until October 31 to try to muster support for a fresh approach, which focuses on complicated proposals for preserving a free-flowing border between British-run Northern Ireland and the Republic of Ireland after Brexit.

But he is facing headwinds across European capitals and his own parliament.

Failure to get both the 27 EU leaders and UK lawmakers to back his plan will result in either a crash exit for Britain or a third Brexit delay this year.

Johnson reaffirmed on Thursday he had no intention of seeking an extension despite parliament's instruction to do so should he fail to secure a new agreement over the next two weeks.

"We have shown great flexibility without our European friends," Johnson told parliament one day after publishing the details of his long-awaited plan.

"If our European neighbours choose not to show a corresponding willingness to reach a deal, then we shall have to leave on October 31 without an agreement -- and we are ready to do so.

"But that outcome would be a failure of statecraft for which all parties will be held responsible."

Yet European Commission spokeswoman Natasha Bertaud insisted it was up to Britain to come up with a plan that worked for everyone.

"There are problematic points in the United Kingdom's proposal and further work is needed. But that work needs to be done by the United Kingdom and not the other way around," she told reporters in Brussels on Thursday.

UK Brexit minister Steve Barclay has said all real talks had to start by this weekend to stand any chance of securing a deal before EU leaders meets in Brussels on October 17-18.

"We need to move forward at pace, intensively," he told BBC radio. "All sides recognise that the alternative, no-deal, is disruptive."

But Johnson was reminded of the challenges ahead when opposition lined up to denounce his proposals.

"Secure an extension or resign," he demanded.

Businesses across Europe fear a "no-deal" Brexit could plug up long-established trade routes and unsettle financial markets for weeks and possibly months.

Johnson appeared to have won vital backing from some members of parliament who had repeatedly rejected the deal his predecessor Theresa May struck with the EU in 2017.

These included at least four more moderate Labour members and some of the most ardent eurosceptics among Johnson's own Conservatives.

"It's got a very good chance of getting through," Johnson's no-deal Brexit preparations point man Michael Gove told ITV television on Wednesday night.

"It seems to be a pretty solid majority, and it's one that the EU can take reassurance from as well because one of the concerns that the EU had in the past (was that) look, if we make a concession, will it get through parliament?"

However, Irish Prime Minister Leo Varadkar warned British proposals "do not fully meet the agreed objectives" for keeping the frontier invisible -- a key part of the 1998 Good Friday agreement that ended decades of sectarian violence between republicans and unionists.

Johnson's strategy tackles the Irish border issue by taking Northern Ireland out of the EU customs union but keeping it aligned with Ireland's rules and regulations for goods.

This would effectively create two temporary economic borders -- including one in the Irish Sea between mainland Britain and Northern Ireland.

One of the most contentious points of the deal gives the devolved Northern Ireland assembly the right to end its alignment with Ireland by 2025.

A time-limited border solution has been a deal-breaker for Brussels in the past.

EU leaders are keen to preserve the economic bloc's territorial integrity and fear counterfeit goods and other contraband flowing in unchecked.

But Johnson needed to insert the provision to secure the backing of his allies from Northern Ireland's small but influential Democratic Unionist Party.