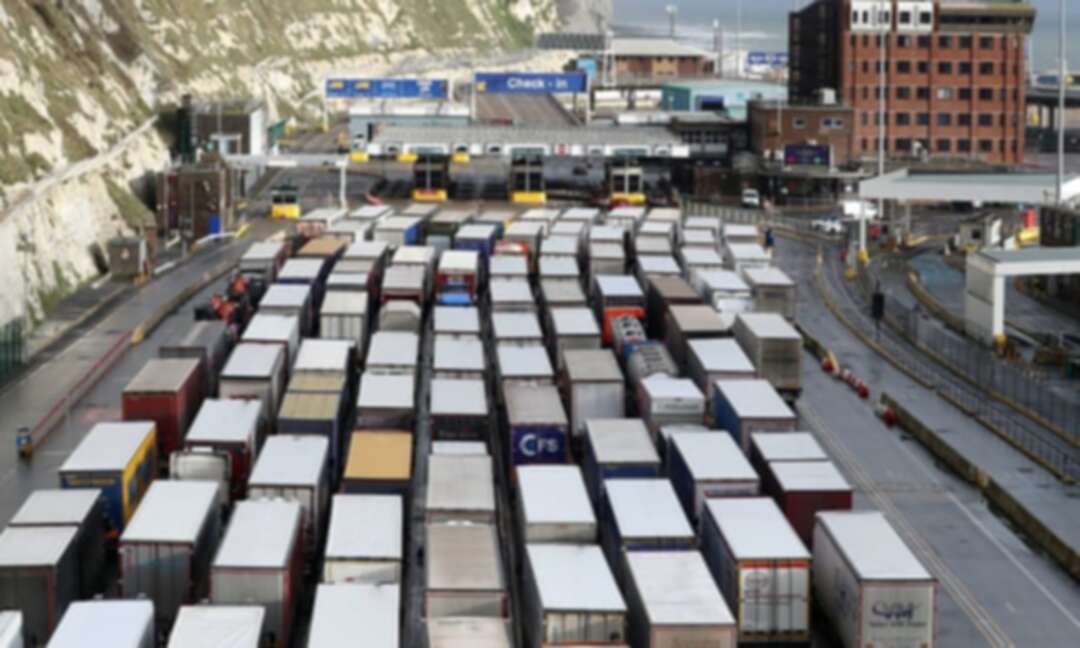 Lorries queuing at the Port of Dover in Kent last month.

Ease of trading is key measure of success, say cross-channel businesses, not lack of lorry traffic

It was billed as a deal that would secure tariff-free access to the EU, that “sunlit uplands” would follow initial disruption to trade.

But one month since the Brexit trade deal came into force, businesses are warning that the “teething problems” Boris Johnson described in a visit to Scotland last week are in fact symptomatic of endemic disruption that will force many businesses to restructure and will mean the end of some British businesses altogether.

“The last month has been like Dante’s fifth circle of hell” for importers and exporters unable to move supplies because of new red tape, said Ben Fletcher, the policy director of Make UK, which represents manufacturers across the UK.

One internationally renowned car manufacturer had “1,000 cars sitting in their car park partially built because they could not get the parts in time,” said Fletcher. “They said this has never happened ever before.”

A survey by Make UK of its members shows that 60% of companies that said there were ready for Brexit “now experience disruption” and are “also finding supply chains significantly impacted.

“There is real anger and incredible frustration for people who either import or export that they are simply not able to move stuff. It is just incredibly difficult to get the paperwork right and there have been very low levels of support from government,” he added.

He was commenting as the Cabinet Office said the flow of cross-channel freight was much better than anticipated with just “2-3%” trucks turned away for not having the paperwork or Covid tests required, and no expectation now that the worst-case scenario it had modelled of 7,000 trucks queuing in Kent would be realised.

But Shane Brennan, the chief executive of Cold Chain Federation, said traffic volumes were still down because of Brexit stockpiling. Warehouses were 85% full, down from 100% before Christmas, but still above the 60% usually seen in January.

He urged the government to “stop using the lack of traffic on Kent roads as a metric of the success of Brexit and realise that the real test is ease of trading”.

French authorities told government officials that “around 50%” of lorries crossing the channel were empty. One logistics company in Europe reports that some of its customers including one large car firm, was paying for trucks to return to the EU without cargo to ensure they were not delayed at the frontier and would therefore have time for a second or third delivery back to the UK each week.

The biggest hit to business is the new rules of origin requirement, which will have a permanent impact on trade. Previously, Brexit goods coming from the EU did not need to be certified as made in Britain or made in the EU to be sold freely within the single market.

But since January the provenance of all goods must be documented. A circuit board from Korea in a gadget assembled in Germany, metal from China in a bicycle made in Italy or textile from Morocco in a shirt made in Portugal could mean the difference between no tariff and a tariff that can range from 6.5% duty on plastics to 1.7% on vacuum cleaners, 12% on coats and 14% on bicycles.

The Food and Drink Federation (FDF) says the issue has been compounded by a lack of notice and sheer lack of experience of customs officials on both sides of the border.

“One port requires every document to be individually stamped. Another wants one stamp on a dozen pages fanned out and is turning people away if they haven’t done it that way,” said Dominic Goudie, its head of international policy.

FDF says some fresh food exporters are facing an existential threat. Cross-channel deliveries that used to take “a couple of days are now taking five days”, killing the shelf life of produce such as British sausage, said Goudie. “They may have to sell frozen sausages in future but the question is: will people want to buy frozen sausages?” said Goudie.

Make UK says even large businesses that spent two years preparing have been scuppered by rules of origin. They complain their EU suppliers were “unprepared” for Brexit and have not been able to supply an audit trail for all goods. Large exporters had some idea of what they were facing come 1 January, but they did not have the detail until the 1,400-page deal was published on 26 January.

One factory in the automotive supply chain told Fletcher it could take it “two months” just to get the rules of origin data from suppliers.

“People are starting to realise how hard it will be to build rules of origin into the existing trading rules. These are teething problems, but they are moving towards a structural problem,” added Fletcher.

The Federation of Small Businesses boss, Mike Cherry, called on the government to issue “direct funding in the form of transition vouchers to aid operational adjustments”, and raised concerns about courier companies that have stopped taking goods from small suppliers that need health certificates.

There are also industry concerns that the scale of the problems have yet to manifest themselves completely because of stockpiling.

“Nobody can be ready for a change of this magnitude. There needs to be a dynamic and continuous conversation on easements and simplifications. The trade deal is like the green base of Lego that you put additional bricks on,” said Adam Marshall, the British Chambers of Commerce (BCC) director general.

The Cabinet Office said Michael Gove had met trade representatives on Thursday and vowed to “pull out all the stops” to help business with weekly meetings of a new Brexit taskforce.

It claimed that “overall businesses have adapted well to the changes” with the latest data showing less than 5% trucks were being turned away from Dover and other ports because of absence of the correct paperwork or of Covid test results.

“We have got to get past Brexit as crisis management. This is our way of trading for the next 50 years. It’s permanent. This is Brexit,” said Brennan.

The BCC has called on the UK and EU leaders to resume talks to help businesses on both sides of the channel struggling with the biggest disruption to trade since the single market was formed in 1993.

NHS has offered Covid jab to all older residents in care homes in England Covid could cost children £350bn in earnings due to lost learning, says IFS