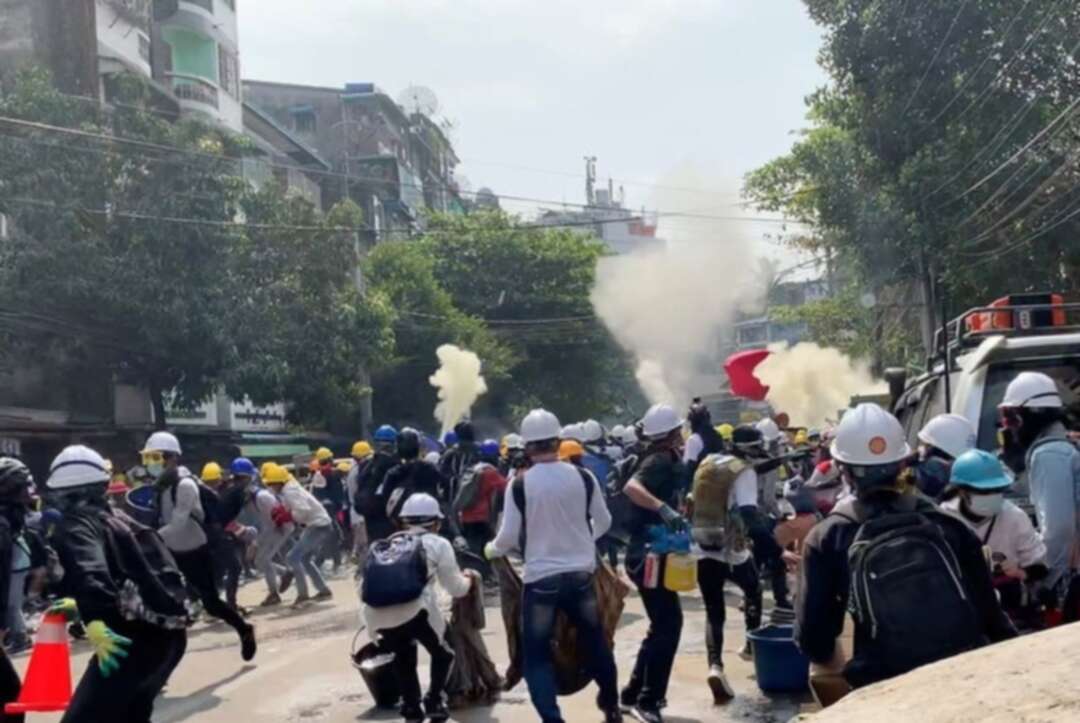 Protesters set off smoke grenades to block the view from snipers in Sanchaung, Yangon, Myanmar March 3, 2021, in this still image from a video obtained by Reuters. (Reuters)

Australia has suspended its defense cooperation with Myanmar and is redirecting humanitarian aid in the country because of last month’s military takeover of the government and the ongoing detention of an Australian citizen.

Australian Foreign Minister Marise Payne said Monday that diplomats and relatives had only been able to contact economic policy adviser Sean Turnell twice by phone since he was detained in early February. She described the access as “very limited consular support.”

Australia announced late Sunday that it had suspended a defense training program with Myanmar worth about 1.5 million Australian dollars ($1.2 million) over five years. The program had been restricted to noncombat areas such as English-language training.

Australian humanitarian aid will be directed away from Myanmar government and government-related entities. Instead it will focus on the immediate humanitarian needs of the most vulnerable and poor in Myanmar, including the Rohingya and other ethnic minorities, Payne said.

Also Monday, Myanmar security forces continued to clamp down on anti-coup protesters, firing tear gas to break up a crowd of around 1,000 people who were demonstrating in the capital, Naypyitaw. The protesters deployed fire extinguishers to create a smoke screen as they fled from authorities. 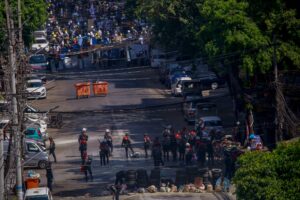 Meanwhile, thousands of protesters marching in Mandalay, the country’s second-largest city, dispersed on their own amid fears that soldiers and police were planning to use force to break up their demonstration.

Large-scale protests have occurred daily across many cities and towns in Myanmar since the country’s military seized power in the Feb. 1 coup, and security forces have responded with ever greater use of lethal force and mass arrests.

On Sunday, police occupied hospitals and universities and reportedly arrested hundreds of people involved in protesting the military takeover.

In Myanmar’s largest city, Yangon, gunshots from heavy weapons rang out for a second straight night in several neighborhoods after the start of an 8 p.m. curfew. The sounds of what apparently were stun grenades could also be heard on videos posted on social media.

The purpose for security forces using such weapons when protesters had left the streets appeared to be part of a strategy to strike fear in anyone who might think about defying the authorities. In a similar vein, many filmed incidents of police and soldiers in plain view showed them savagely beating protesters they had taken into custody.

Some of the shooting was heard near hospitals, where reports said neighborhood residents sought to block the entry of police and soldiers. 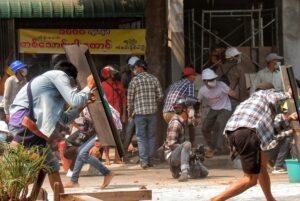 Security forces have often targeted medical personnel and facilities, attacking ambulances and their crews. Members of the medical profession launched the Civil Disobedience Movement, which is the nominal coordinator of the protests, frequently hailed on demonstrators’ signs by its CDM initials. Taking over hospitals would allow the authorities to easily arrest wounded people presumed to be protesters.

Meanwhile, a Canadian-Israeli lobbyist hired by Myanmar’s junta has said the ruling generals want to get out of politics and shift the nation away from China after they grabbed power in the widely-condemned coup against the nation’s civilian government.

Ari Ben-Menashe, who previously represented Sudan’s military leader and Zimbabwe’s Robert Mugabe, spoke to The Associated Press on Sunday from the US after returning from his second trip in the past month to Myanmar.

He said he was confident he can persuade the Biden administration to lift sanctions imposed on Burmese military leaders who directed the coup last month that deposed and detained Myanmar’s elected leader, Aung San Suu Kyi.

He said the US and others in the West have reduced Myanmar’s political conflict to a black and white tale of military repression against pro-democracy activists that ignores the fraudulent exclusion of millions of minorities from voting in last year’s election.