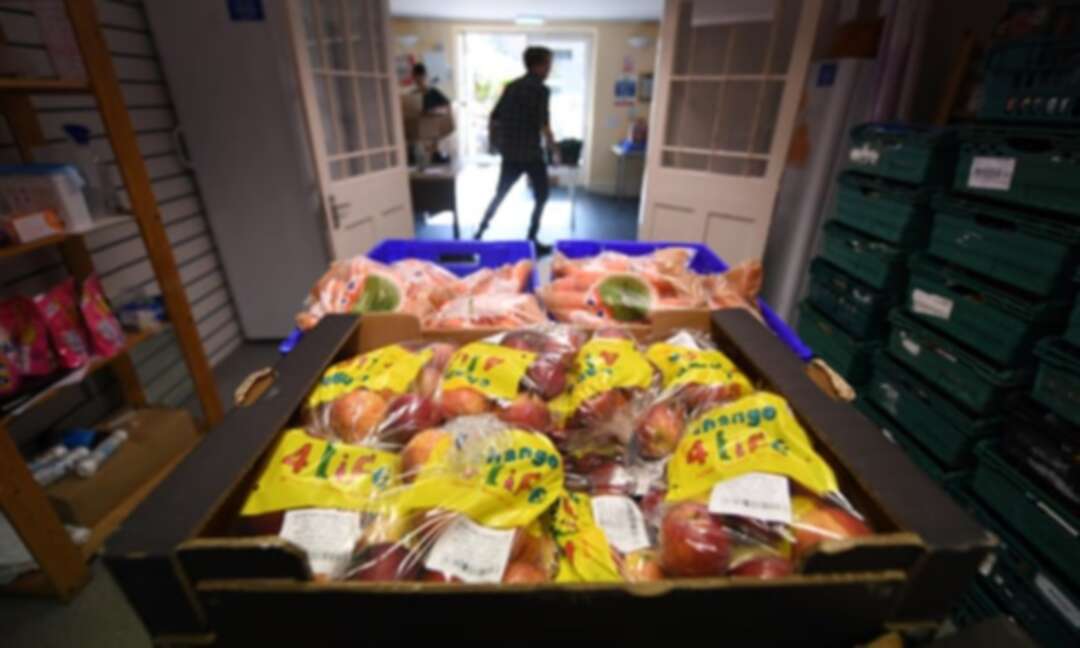 A Red Cross centre, London, this April organising emergency food for asylum seekers said to be getting little help from the UK government.

Thousands of asylum seekers accommodated in hotels in England have been subjected to “dehumanising treatment” during the pandemic, the Refugee Council has warned.

The council revealed that one 14-year-old boy was sent to hospital after losing 3kg in body weight (just under 7lb) due to the poor quality of the food provided.

A report by the council highlights the “unacceptable and unsustainable” conditions in hotels, including the negative impact on mental health, the lack of clothing and footwear, poor quality of food and exposure to racist abuse, with some stays lasting more than a year.

In March 2020 the Home Office, in response to the coronavirus pandemic, paused evictions from accommodation for those who had received decisions about their asylum claims. It led to more people entering the asylum support system than exiting it. At the end of February roughly 8,700 asylum seekers were living in more than 90 hotels across the UK.

Asylum accommodation is provided through three contractors, each responsible for specific geographical regions of the UK.

The Refugee Council has supported more than 400 asylum seekers in hotels and the report was based on their testimony.

Enver Solomon, chief executive of the council, said: “People who have fled war and persecution often arrive in the UK with just the clothes on their back, in urgent need of healthcare, nutritious food and other essentials such as toiletries.

“It’s appalling that they have had to suffer so much as a result of what to them feels like being abandoned in inappropriate accommodation with inadequate support for many weeks or months. The Home Office should have anticipated these basic needs and made sure they were provided for the children and adults in their care.”

Solomon said that to stop the dehumanising treatment the charity was calling “on ministers to promise that every person seeking asylum receives appropriate support, including access to healthcare, basic clothing and essential services”.

He added: “People seeking asylum should be able to live in dignity, rather than in conditions that worsen their health and wellbeing. As the Windrush Lessons Learned report stated, the Home Office must always see the ‘face behind the case’.”

The single mother of three children whose son, 14, had been admitted to hospital said the teenager was diagnosed with depression. He had lost weight since living at the hotel due to the poor quality of food supplied.

The charity says the food provided in many of the hotels is “a major cause of concern”. Food often arrives in small portions, with limited options available, the report says. The quality varies widely across sites, with some hotels providing little or no fruit.

The report says that long periods of time spent in hotels is affecting the mental health of asylum seekers. People have been self-harming, in crisis and contemplating suicide. The Home Office does not provide clothing for people seeking asylum, the charity says, so this can prohibit people from leaving the hotel for exercise or to access services.

It says people put up in hotels get little or no information about how to access primary health care. Not being registered with a GP is of particular concern, given that access to the Covid-19 vaccine depends on having an NHS number, which is generated through registration with GPs.

The report also highlights racist harassment of asylum seekers in hotels by anti-migrant groups who have tracked them down. There had been several incidents of people entering the hotels and harassing and verbally abusing people seeking asylum, sometimes while filming these activities and sharing them on the internet.

In addition, families with school-age children living in hotels often have not been supported or encouraged to seek enrolment at schools, leaving many children unable to get formal education

The majority of people living in hotels are accommodated on a full board basis so have no access to cash, making it impossible for them buy or replace essential items. It took until the end of October 2020 for the Home Office to agree on a cash payment of £8 a week for some of the people living for extended periods in full-board accommodation.

Before the pandemic, use of asylum accommodation was reasonably static with about 50,000 people at any one time, but at the end of 2020 the total number supported was 64,041.

A Home Office spokesperson said: “As part of our New Plan for Immigration, the use of hotels to accommodate new arrivals will end and we plan to introduce new asylum reception centres. The use of hotels to temporarily accommodate people was necessary to help safely manage demands on the asylum estate during the pandemic.

“Asylum seekers who would otherwise be destitute are provided with accommodation, a choice of three meals a day in line with NHS nutrition guidelines, as well as access to fresh fruit and drinking water, and we work closely with our providers and local charities to provide other basics.”

GCHQ chief: west faces ‘moment of reckoning’ over cybersecurity The clashes in Qamishli Northeast Syria: Another attempt by Russia and Assad's regime