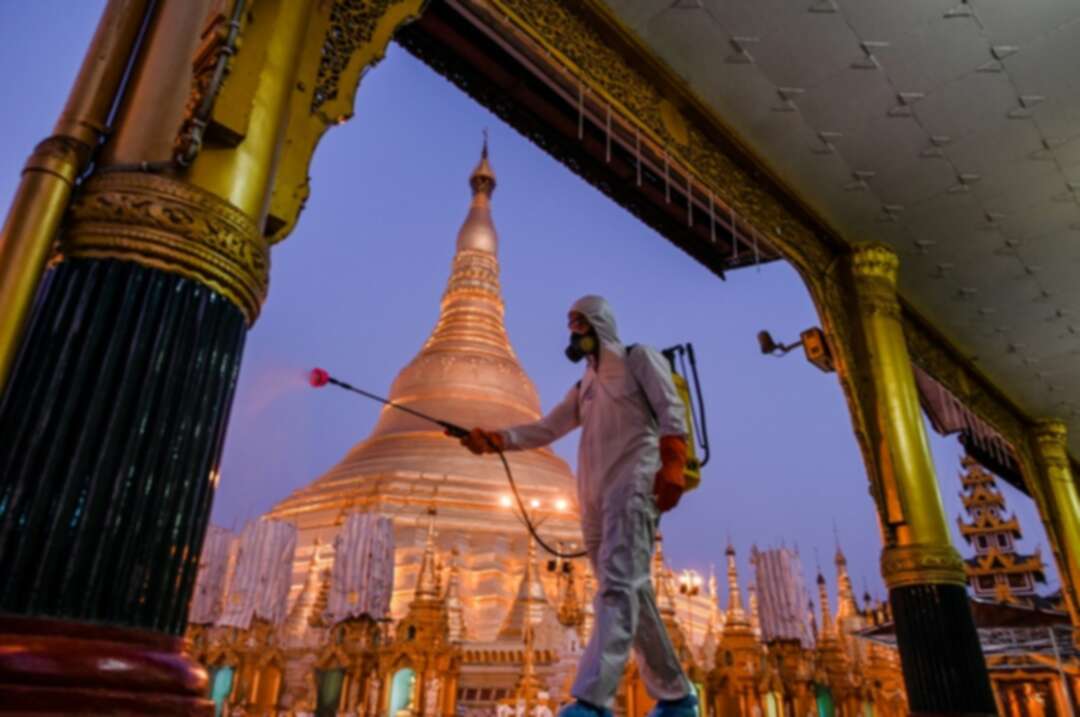 A volunteer sprays disinfectant in Shwedagon Pagoda compound as a preventive measure against the COVID-19 coronavirus in Yangon, Myanmar File photo AFP

Here are the latest developments in Asia related to the novel coronavirus pandemic: Asia virus latest

Confidence among Japan's biggest manufacturers has plunged into negative territory for the first time in seven years, a key survey showed, as the coronavirus pandemic hits demand and disrupts production.

The Bank of Japan's March Tankan business survey -- a quarterly poll of about 10,000 companies -- showed a reading of minus eight among major manufacturers, the first negative reading since March 2013.

China's decision to lock down the city of Wuhan, ground zero for the global COVID-19 pandemic, may have prevented more than 700,000 new cases by delaying the spread of the virus, researchers said.

Drastic control measures in the first 50 days of the epidemic bought other Chinese cities valuable time to prepare and install their restrictions, according to the paper by researchers in China, the United States, and Britain, published in the journal Science.

Taiwan -- which has been praised for its handling of the outbreak -- will donate 10 million surgical masks and other supplies to medical workers in countries hit hard by the virus, President Tsai Ing-wen said.

China has also sent countries medical aid, as it seeks to deflect criticism over its initial missteps in handling the viral outbreak after it emerged there late last year.

China's communist leadership claims Taiwan as part of its territory and has vowed to seize the self-ruled island, by force if necessary.

Beijing 2022 organizers said they face "a special situation" with the postponement of the Tokyo 2020 Olympics leaving less than six months between the Summer and Winter Games.

The Tokyo Olympics are now scheduled to run from July 23 to August 8, 2021, after they were put back a year because of the coronavirus pandemic, while the Beijing Winter Games begin on February 4, 2022. Asia virus latest

A Sydney man allegedly caught driving a Lamborghini at nearly twice the speed limit claimed he was rushing to a COVID-19 testing clinic, police said.

The 35-year-old was fined for speeding and had his license suspended.

Meanwhile, a Tasmanian man who allegedly lied to police about having coronavirus after being pulled over in his car has been slapped with a barrage of charges. levant

Iran does not need sanctions relief to confront coronavirus Stick to the ‘chain of command’! Pentagon rejects aircraft carrier captain’s plea to save crew as 100+ sailors contract Covid-19