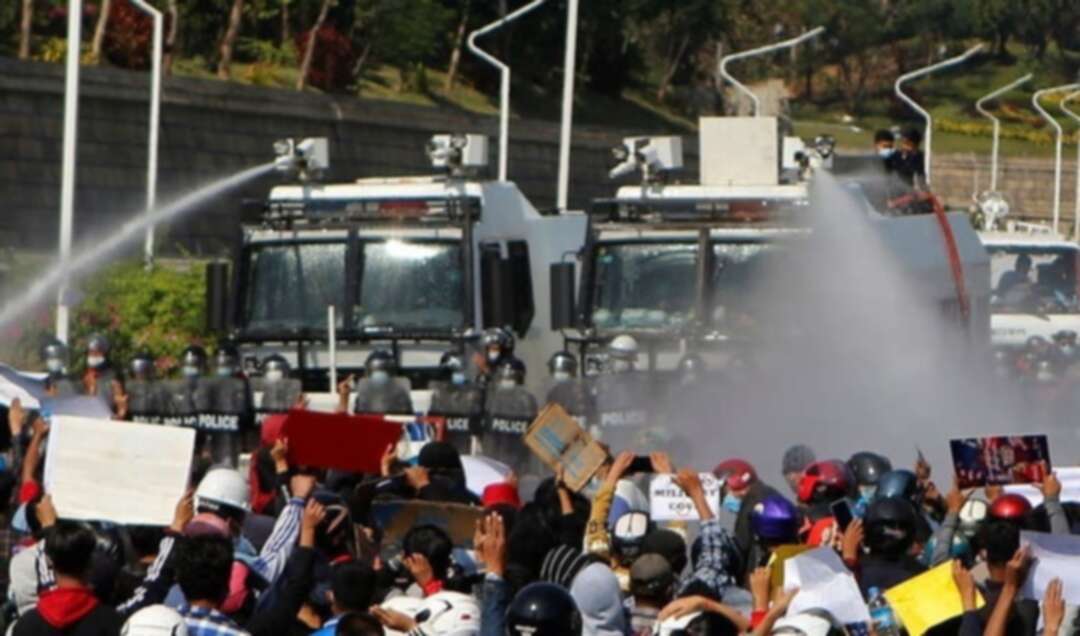 Police fire a water cannon at protesters rallying against the military coup and to demand the release of elected leader Aung San Suu Kyi, in Naypyitaw, Myanmar, February 9, 2021. (Reuters)

Thousands assembled in the business hub, Yangon, while protesters took to the streets of the capital Naypyitaw, the second city Mandalay and other towns a day after the biggest protests so far in the Southeast Asian country.

“Stop kidnapping at night,” was among the signs held up by protesters in Yangon in response to arrest raids in recent days.

The United Nations human rights office said on Friday more than 350 people, including officials, activists and monks, have been arrested in Myanmar since the Feb. 1 coup, including some who face criminal charges on “dubious grounds”.

Anger in Myanmar has been fuelled by videos showing more arrests of government critics - including a doctor who was part of the civil disobedience movement. Some arrests have taken place during the hours of darkness.

The government did not respond to requests for comment on the arrests.

“Family members are left with no knowledge of the charges, location, or condition of their loved ones. These are not isolated incidents, and nighttime raids are targeting dissenting voices. It is happening across the country,” it said in a statement.

The army said it had seized power because of alleged fraud in a November election that Suu Kyi’s National League for Democracy party had won in a landslide. The army’s complaints were dismissed by Myanmar’s electoral commission.

The coup halted a tentative transition to democracy that began in 2011 after nearly half a century of isolation and stagnation under military juntas.

Suu Kyi, for decades the standard bearer of the fight for democracy in Myanmar, faces charges of illegally importing and using six walkie-talkie radios found in a search of her house. 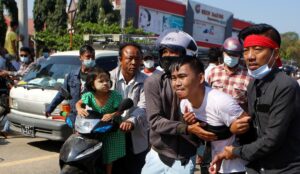 An injured protester is helped by his fellow protesters, at a rally against the military coup. (File photo: Reuters)

The 47-member UN Human Rights Council adopted a resolution on Friday calling on Myanmar to release Suu Kyi and other officials from detention and refrain from using violence on protesters.

Thomas Andrews, the UN rights investigator for Myanmar, told a special session of the rights council in Geneva that the UN Security Council should consider imposing sanctions and arms embargoes.

Myint Thu, Myanmar’s ambassador to the United Nations in Geneva, told the session that Myanmar did not want “to stall the nascent democratic transition in the country,” and would continue international cooperation.

The US this week began imposing sanctions on the ruling generals and some businesses linked to them.

Airline staff, health workers, engineers and school teachers were among groups that joined the protest marches on Saturday and which have rallied to a civil disobedience campaign that has shut down a swath of government business.

“We are preschool teachers, Every child our future, We don’t want dictatorship,” said one banner.

The state-run Global New Light of Myanmar newspaper said thousands of people had joined pro-military demonstrations in parts of Myanmar on Friday. Reuters was not immediately able to verify the report.

The junta remitted the sentences of more than 23,000 prisoners on Friday, saying the move was consistent with “establishing a new democratic state with peace, development and