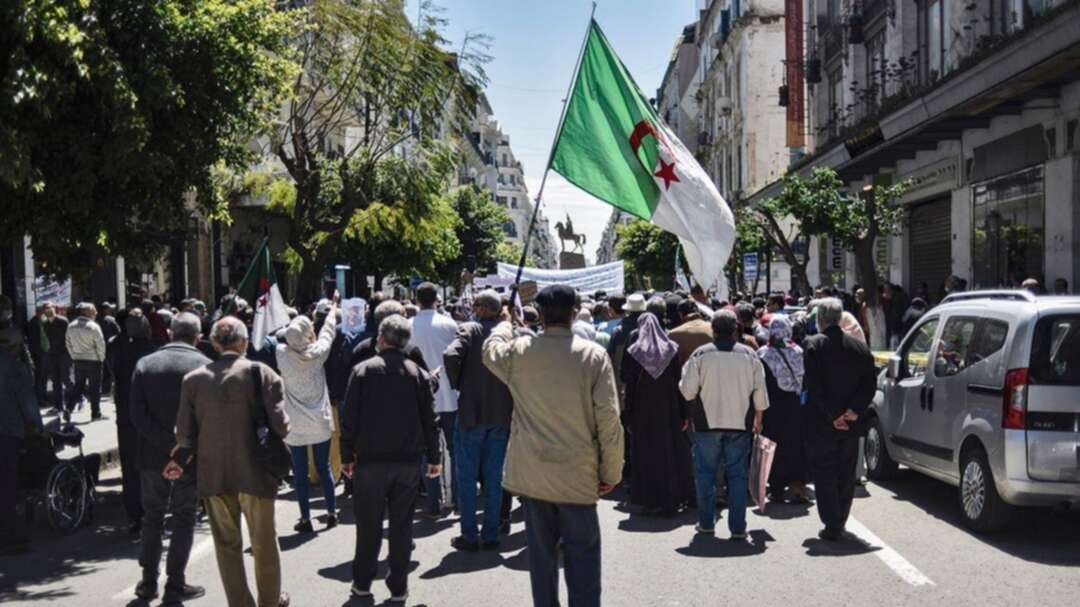 People chant slogans as they march during a student-led anti-government demonstration in Algeria's capital Algiers on April 20, 2021. (Ryad Kramdi/AFP)

Algeria will bar any protests that do not have prior approval, it said on Sunday, a move apparently aimed at the weekly mass demonstrations that ousted a veteran president in 2019 but have continued to demand a more thorough purge of the ruling elite.

The Interior Ministry said all protests would need a permit that specified the names of organizers and a start and finishing time for the demonstrations.

“Failure to comply with these procedures will result in violating the law and the constitution, which denies the legitimacy of the march, and it will be necessary to deal with it on this basis,” the ministry said.

Such restrictions, even if permits were given, would mean naming specific individuals as formally responsible for a hitherto leaderless protest movement.

The measures are in line with a clause in a new constitution approved by Algerian voters in November last year, in a referendum that drew only 25 percent participation, that requires organizers to give advance information before demonstrations.

Some protesters believe the restrictions are aimed at ending all street marches. “They are seeking reasons to justify any decision to ban marches,” said Ahmed Badili, a member of the leaderless protest movement known as Hirak.

The restrictions come ahead of early legislative elections on June 12 that President Abdelmadjid Tebboune, elected in December 2019 in a vote boycotted by the protest movement, vowed would be fair and transparent.

Thousands of people have been marching every Friday since February after a hiatus of nearly a year during which protests were halted due to the COVID-19 pandemic.

The mass protests erupted in February 2019 after then president Abdelaziz Bouteflika said he would run for a fifth term, bringing hundreds of thousands onto the streets.

Bouteflika stepped down in April 2019 but the protests continued as marchers demanded the departure of the entire ruling elite, an end to corruption and for the army to quit politics.

While Tebboune has publicly praised the rallies as a moment of national renewal and offered dialog with the movement, the security forces have detained protesters, drawing criticism from rights organizations.