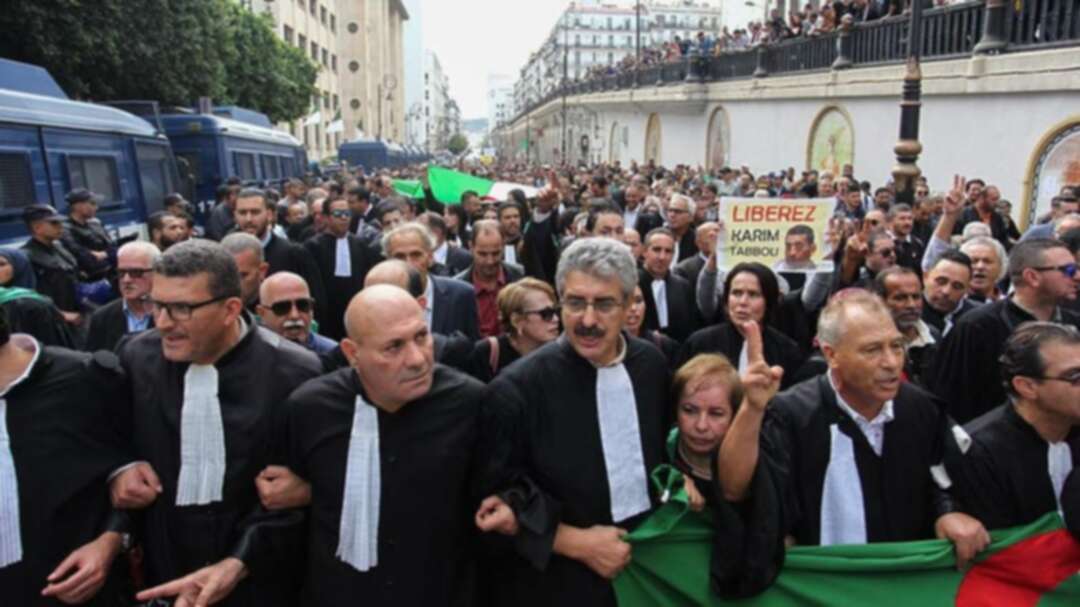 Lawyers take part in a demonstration demanding the independence of the judiciary system in the Algerian capital Algiers on October 24, 2019. (File photo AFP)

Algerian judges and prosecutors began an open-ended strike on Sunday to demand the independence of the judiciary after a massive reshuffle that has affected thousands, the union of magistrates said.

The move comes as the country remains wracked by anti-government protests against a planned December presidential election that must be overseen by judges.

Earlier this month the justice ministry carried out an unprecedented reshuffle of the judiciary in a move that affected 3,000 judges and prosecutors, out of around 6,000.

The National Magistrates’ Syndicate (SNM) denounced the move as “a stranglehold by the executive over the power of the judiciary.”

It accused the government of “encroaching on the prerogatives of the Supreme Judicial Council,” it said in a statement.

The justice ministry defended its actions and said the reshuffle was “validated unanimously” by the members of the judicial council.

According to the SNM the strike was being observed by 96 percent of all judges and prosecutors.

As a result, courts across the country - including the Supreme Court - have come to a standstill, according to Saad Eddine Merzoug, spokesman of the Magistrates’ Club, a group established earlier this year.

Magistrates play a major role in overseeing elections in the North African country.

The planned December poll is meant to find a successor to veteran leader Abdelaziz Bouteflika, who quit in April under the pressure of demonstrations.

“The strike could have a negative impact on the upcoming polls,” said Merzoug.

“The Magistrates’ Club and the SNM are allied in order to see the strike through until our demands are met,” he added.

Activists are demanding sweeping reforms in the oil-rich country before any vote takes place, and say Bouteflika-era figures still in power must not use the presidential poll as an opportunity to appoint his successor.

The Hirak protest movement was formed in February to demand that Bouteflika resign instead of running for a fifth term, and has been backed by Algerians from all walks of life, including lawyers and judges.

Polls originally planned for July 4 were postponed due to a lack of viable candidates and in April Algeria’s magistrates had said they would boycott that election.

The country has an interim president, Abdelkader Bensalah.

Algeria’s electoral committee has registered 22 candidates for the December polls, including two former prime ministers who served under Bouteflika.