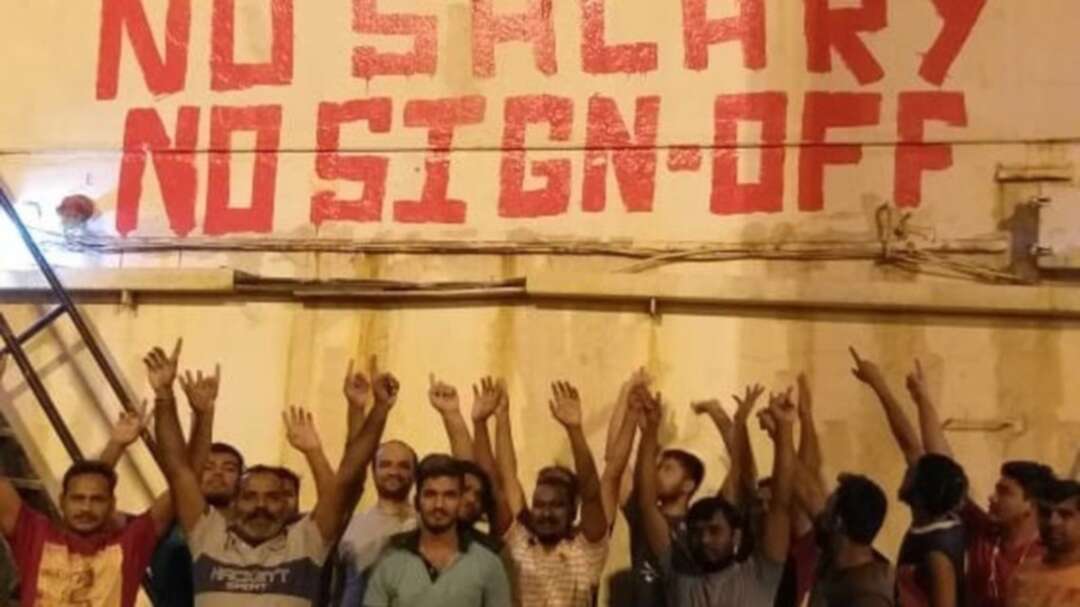 Onboard the vessel M/V Ula in Kuwait,19 abandoned seafarers have been on hunger strike in protest over unpaid wages backdated for more than a year. (Supplied)

For 46 days, 19 abandoned seafarers onboard a cargo ship in Kuwait have been on hunger strike in protest over unpaid wages backdated for more than a year. They haven’t received their pay in 14 months, claimed the crew members.

The sailors onboard the vessel M/V Ula vowed not to eat solid food until their ordeal is addressed, and they are given their outstanding wages – which for many run into the tens of thousands of dollars.

The vessel is currently docked at Shuaiba Port, but the sailors have remained onboard while they battle to get their money back from the ship’s owner. They fear that if they leave, they will never receive their unpaid salaries.

Owed $34,000 in back salary, Bhanu Shakar Panda is one of several crew members owed sizeable amounts, he claimed.

Speaking to Al Arabiya English from the vessel, one of the sailors, Panda, of India, said he desperately wants to return home to his wife and 13-year-son, whom he hasn’t seen in over a year, but he refuses to give up his battle for his outstanding money.

“We had not any option but to go on hunger strike,” he said. “We haven’t been paid so long and we have been waiting so patiently. We just didn’t know what else to do.”

Panda said morale is low on the vessel, where the crew have spent between 15 to 27 months onboard. 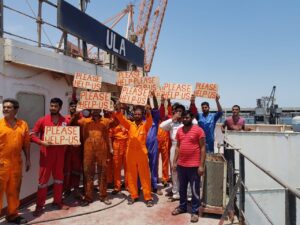 As the boat was carrying cargo consisting of concrete, an auction this week could generate money to pay their outstanding wages.

With the sailors predominately from India, and some crew members from Turkey and Azerbaijan, their families are dependent on their salaries to live, but many have run into debt.

“We feel pressure, we miss our family,” said Panda. “But we are doing this for them. We have loans in our home country. We need the money.”

Human rights activist Shaheen Sayyed works to help stranded Indians in foreign countries. She has been working with authorities to pursue the monies owed to the sailors.

“The situation is very bad, they have been stuck in limbo for more than a year,” she said. “They are in dispute with the owner from Qatar, whose company has gone bankrupt.”

She said another issue was getting the maritime organizations access to the vessel, so nobody has been able to check on the welfare of the sailors.

Their situation is by no means unique.

Globally, hundreds of seafarers are currently stuck onboard vessels when their ships’ owners run out of money.

Sailors who leave their ships in these circumstances risk never being paid so often remain on the vessels awaiting resolutions.

With no income, debts back home, dwindling food stocks on board and no employer looking after their welfare, abandoned seafarers often rely on donations from charities to survive.

For the sailors stuck onboard the M/V Ula, all they can do is wait and hope, they said.

“We don’t know what will happen,” said Panda. “But we are just innocent victims in this. This is our livelihoods we are fighting for. What about our basic human rights? We just want our money,” he pleaded.