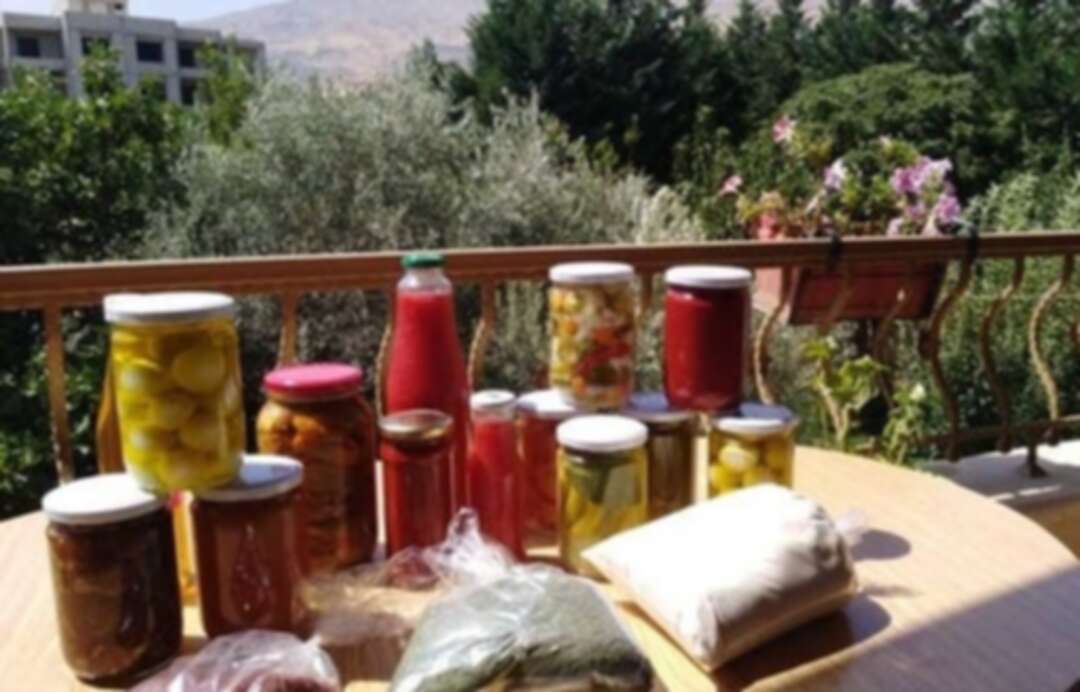 Ali Hammoud, the founder of Mounet Em Jamal, focuses his business on homemade jams, labneh, olives, pickles and olive oil, all of which are prepared by his mother. (Supplied)

Lebanon's severe economic crisis, along with the coronavirus pandemic, has provided challenging conditions for businesses to survive. Still, some have been able to find light during these rough times after an outpour of community support for local businesses and talents.

As Lebanon rang in the New Year, putting 2020 behind its back was not an easy task, given that the consequences of the chaotic events that unfolded last year are still felt today.

Lebanon was hit by Covid-19 and by an economic crisis that saw triple-digit inflation and the Lebanese pound depreciating by almost 80 percent since the nationwide anti-government protests, which broke out on Oct. 17, 2019.

The currency had been pegged to the US dollar since 1997, at 1,507.5, as Lebanon was and still is highly dependent on imported goods.

This was exacerbated by the devastating Port of Beirut explosion last August and that destroyed half of the city, crushing many businesses that were already struggling to keep their doors open.

The World Bank estimated that the massive blast caused between $3.8 billion and $4.6 billion in damages.

In a statement released this week, The World Bank estimated that around 1.7 million people in the country are expected to fall under the poverty line. Of those, approximately 840,000 people will be under the food poverty line.

An opportunity for local businesses

Despite the difficult situation, some local and home-based businesses saw increased support for their work.

Layal Khaled is one of those.

The 29-year-old artist showcases her products on her Instagram page, Smiles for Miles, which she started in 2017 as a source of extra income.

Initially, she did this in the summers, but during her maternity leave in December 2019, she decided to take on working on her art.

In comparison to when she first started, Khaled said that she had seen an increase in purchases over the past year.

In addition to people’s willingness to support local products, the coronavirus pandemic also contributed to the increased number of clientele in Khaled's case.

“Previously, people would have preferred to see items live themselves before buying them, but with the coronavirus and the lockdown, they were … forced to buy online.”

Despite the ongoing crises and the risks that come with it, others saw in the worsened economic situation a possibility to start their own small business.

For 29-year-old Ali Hammoud, the founder of Mounet Em Jamal, the economic situation and the need for an extra source of income to support his parents pushed him to embark on this journey last July.

Hammond’s business focuses on homemade jams, labneh, olives, pickles and olive oil, all of which are prepared by his mother.

“Since the Lebanese pound has depreciated, this means that not everyone can afford to buy imported products,” Hammoud, who has been living in France for 10 years, said.

“Hence, the initiative was based on the equation of benefitting ourselves and others

Hammoud said that they started slowly with limited quantities until people were more encouraged to try their products. With the help of social media, Mounet Em Jamal soon became popular.

Although Hammoud and his parents are relatively new to the business, he said he could “sense support” from the community for his initiative given the country’s economic situation.

“The economic collapse encouraged people to try to find an opportunity during these times to produce locally,” he said, noting that if the collapse worsens, it will also affect the sustainability of these businesses.

Nour Hakim, 30, has been buying local products from small businesses for the past year.

As a consumer and a client, Hakim said that her purpose was to support these businesses during tough times.

“I am supporting them, and at the same time, in return, I am getting very good quality products with good customer service and delivery,” Hakim said. “I am going to continue

The community support was also felt by former banker Gisane Yamak, who, along with a group of friends, launched an initiative ahead of the holidays to encourage people to buy from small businesses.

The initiative focused on donating gifts to children across Lebanon, and those willing to contribute would make purchases from local businesses.

Yamak, 45, resorted to social media platforms to share posts about the products they provide, something she was already doing since November as a personal initiative.

“The target was to reach 1,000 gifts. But, we exceeded that target to reach 2,200 gifts, supporting between 20 and 25 businesses selling different items,” she told Al Arabiya English.

Yamak said she hoped that this encouragement among business owners and clients would continue despite the ongoing crises and the challenges facing businesses with no online presence to promote their work.

“Such initiatives are to tell people that these