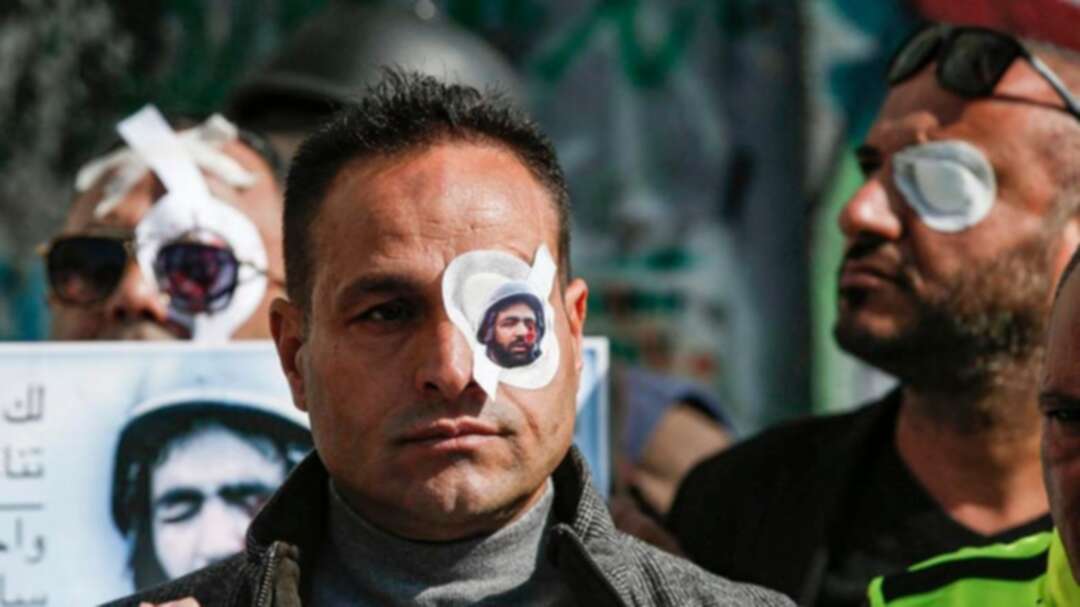 A Palestinian journalist wears a paper eye patch during a demonstration in Bethlehem in the occupied West Bank on November 17, 2019, in solidarity with Muath Amarneh. (AFP)

Relatives of a Palestinian freelance photographer said Sunday that he has lost vision in one eye after apparently being struck by Israeli fire while covering a demonstration last week in the occupied West Bank.

Muath Amarneh’s case has drawn significant attention among Palestinians and in several Arab countries, with journalists voicing solidarity by posting photos on social media with themselves wearing eye patches.

Israeli paramilitary border police fired tear gas on Sunday at Palestinian journalists who held a protest in solidarity with Amarneh in the city of Bethlehem. Protests were also held in Gaza City.

Palestinian colleagues say Amarneh, 35, was targeted by Israeli forces during a demonstration on Friday near the West Bank city of Hebron.

Israel’s border police said it did not target Amarneh in Friday’s protest. It said it only used “nonlethal” means to disperse the crowd and released a video of what it says was Amarneh standing behind a group of stone-throwers.

Amaranth's relatives said doctors Israel’s Hadassah Medical Center in Jerusalem informed them Amarneh has lost vision in his eye. But hospital officials could only confirm that he suffered a “serious” injury.

A video from the incident posted online showed Amarneh being carried off by other journalists while bleeding from his left eye. The demonstrators were protesting what they say were confiscations of village land by the Israeli military.

Palestinian President Mahmoud Abbas called Amarneh and condemned the shooting, pledging to ensure he gets the best medical care for his injury.

Palestinian journalists frequently report abuse by Israeli security forces but have little to no recourse for redress.

Last year, an Associated Press cameraman was shot while covering Palestinian protests along the Gaza border fence by an Israeli sniper.

The military neither apologized nor acknowledged shooting him.